Ukraine war: Ex-TA reserve, 60, among Brits signing up to take on Putin 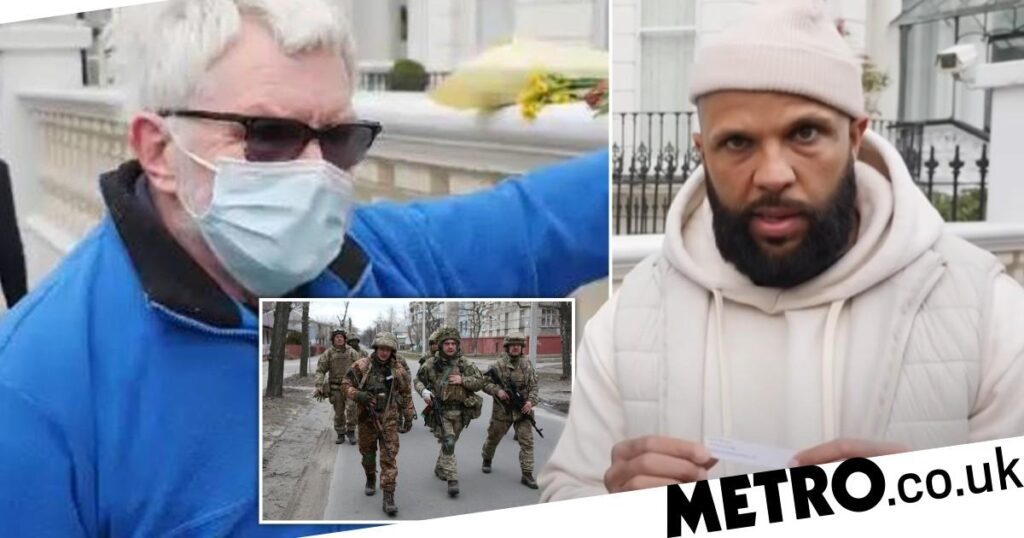 
Britons signing up to fight for Ukraine have said they are ‘willing to die’ to stop Vladimir Putin’s invasion.

Builders, brickies and even a 60-year-old army reservist are among those preparing to take up arms for a country that isn’t their own.

Ukraine’s President Volodymyr Zelensky has called for Europe’s men to join the fight ‘and defeat Putin like we defeated Hitler’.

Several people turned up to enrol at the Ukrainian embassy in London on Monday after Foreign Secretary Liz Truss said she would ‘absolutely’ support British nationals who wanted to help.

Among those outside the embassy were friends Leon Dawson and Tom Konarzewski, who plan to join Ukraine’s defence effort despite having no military experience.

Mr Dawson, who runs a gym in Surrey, told Sky News: ‘We’re young, strong, fit men and we can help, so why not?

‘We’ve been watching the news, we’ve been seeing what’s happening. We just thought we could make a difference so we’ve come to help.’

The 37-year-old said he was prepared to lose his life fighting to defend Ukraine – and he’s not the only one.

Brian Grove, 60, said he was ready to ‘get on the plane tomorrow’ to help Ukraine’s military, having previously served in the Territorial Army.

Asked if he was prepared to put his life on the line, the grey-haired Brit replied: ‘Well somebody has to.’

Mr Grove, from Kent, added: ‘At the moment, we’ve got businesses in this country and in Germany that are funding Putin’s war by trading with Russia.

‘They are collaborators. They will be seen exactly that way.’

More volunteers flocked to the embassy in west London on Tuesday, saying they were signing up to fight out of ‘solidarity’ and because ‘it’s the right thing to do’.

Roger Conway, from Newcastle, immediately sent his information to an email address he collected at the embassy gate. He has no army or conflict experience but is keen to help.

He has ‘absolutely no idea’ where he could be sent and assumes he will receive training from the Ukrainian military.

‘We’ve convinced ourselves that we’re stepping in and we’re helping by having Facebook photos and tweeting solidarity but it doesn’t really make a difference to anyone.

‘Solidarity doesn’t look real if you don’t do anything.’

Oliver Miller, 29, a mechanical engineering student from Chelmsford, Essex, said he is also ‘hoping to go out and help somehow’.

He has not told his family and girlfriend about the decision and is not sure how supportive they will be.

But he said: ‘I don’t want to sound cliched and cheesy, but sometimes it’s something you feel like you have to do.’

Other British nationals have volunteered to help the thousands of people fleeing Ukraine to neighbouring countries.

Liam Hawkins drove to the Ukrainian embassy from Deptford, south-east London, to sign up to help refugees stuck at the border in a humanitarian capacity.

The 30-year-old father said: ‘I haven’t slept since this invasion and I just can’t stay at home with my babies and my missus and do nothing.

‘Right is right and wrong is wrong, regardless of nationality or creed or whatever.

‘Sit there and count your money when this is going on next door? Doesn’t mean nothing, so I’m going to do the right thing.

‘I know it’s dangerous, people are trying to talk me out of it, but I believe I can make a difference.’

Some of the volunteers said they had family in Ukraine or its bordering countries, while others who have fled conflict in their own homelands said they felt a sense of solidarity and a need to help.

Lucas Pedrangello, 23, moved from Parana in south Brazil over a year ago where he fought against drug lords and traffickers as an infantry soldier.

He said: ‘I am here as a missionary from Christ, and want to help the fight in Ukraine.

‘It is the life I want to lead, I want to help as many people as possible, and I want to do what I can.

‘The Ukrainian people deserve better, they have been through such hardship.

‘I want to help the people, I can’t just sit at home, I need to be out and fighting. It is not in my nature, but I want to do what I can.’

Hundreds of British volunteers are expected to join Ukraine’s international legion of foreigners who wish to join their battle against Russia – despite the prime minister and other politicians advising against it.

Defence secretary Ben Wallace has urged Britons not to travel to Ukraine to join the fighting as he said the ‘very dangerous’ situation could lead to them being killed.

It comes after Zelensky, who has won fans around the world for his own show of bravery, announced the formation of a new ‘international legion’ to help defend his country and appealed to foreign volunteers to come forward, promising them arms to fight against the Russian troops.

Asked on the BBC’s Sunday Morning programme if she would support UK citizens who chose to answer the call, foreign secretary Ms Truss said: ‘That is something people can make their own decisions about.

‘The people of Ukraine are fighting for freedom and democracy, not just for Ukraine but for the whole of Europe.

‘Absolutely, if people want to support that struggle I would support them in doing that.’

But Mr Wallace, who served in the Scots Guards, said there were ‘better ways’ for Britons to help.

Mr Wallace told Sky News Ms Truss was right that it was a ‘just cause’, but added: ‘If you’re keen to help and you’re a United Kingdom citizen, come and join our armed forces.

‘Look, there are people who will go… I think what I would say is unless you are properly trained, unless you are a, you know, experienced member of an armed forces, I think there are better ways for you to contribute to the security of Ukraine.’

He said this could be through donating money through the Ukrainian embassy to be spent on weaponry and aid, or to volunteer with organisations helping refugees.

Later, Downing Street effectively contradicted Ms Truss, as the prime minister’s official spokesman said: ‘We think the best way we can help Ukraine right now is by ensuring Putin fails. There are a number of ways Brits can show their support for that, and the Ukrainian embassy in London is putting out information about how British people can support.

‘We fully recognise the strength of feeling about British people wanting to support the Ukrainians following the Russian invasion. There’s advice up on travelling to Ukraine, we currently advise against travel to Ukraine.’

Mr Zelensky’s call for an international legion carried echoes of the International Brigades that fought against the fascists — backed by Nazi Germany — in the Spanish Civil War in the 1930s.

Ukrainian foreign minister Dmytro Kuleba appeared to encourage the comparison, saying that just as Hitler had finally been defeated, ‘we will defeat Putin, too’.

‘Foreigners willing to defend Ukraine and world order as part of the International Legion of Territorial Defence of Ukraine, I invite you to contact foreign diplomatic missions of Ukraine in your respective countries,’ he tweeted.

‘Together we defeated Hitler, and we will defeat Putin, too.’

Mr Wallace was asked on LBC whether, with his military experience, he would head to Ukraine if he was not a government minister.

He said although he would ‘always fight for my country’, he joked that he would ‘probably be reduced by now to be in charge of, at my age, the Home Guard or something’.

But he said the situation in Ukraine was ‘very dangerous’ and citizens should find other ways to support the country.

Armed forces minister James Heappey was asked on Good Morning Britain whether he would echo Ms Truss’s words, and said: ‘I probably wouldn’t.

‘And I think that the travel advice is that UK nationals should not travel to Ukraine.

‘But if people are filled with a desire to stand up for freedom, like generations of young people before them, they would be very, very welcome at their nearest Army, Navy, Air Force recruiting office,’ he said.

‘I just think people have to have their eyes wide open to what war is and it is not somewhere that you just jump on a plane, grab a rifle and get going.

‘The people that you see doing that in Kyiv are doing it because they are facing an existential threat, out of absolute desperation.’

There have been questions about the legality of Britons going abroad to fight in previous foreign conflicts.

In 2014, the Crown Prosecution Service warned that UK nationals who went to fight in the Syrian civil war could be committing an offence, even if they joined the rebels fighting to overthrow president Bashar Assad.


MORE : Russia-Ukraine war live: Boris Johnson flies out to meet Nato troops and Russia to be investigated for war crimes

Share. Facebook Twitter Pinterest LinkedIn Tumblr WhatsApp Email
Previous ArticleZelensky urges Biden to say something ‘strong’ and ‘useful’ in State of the Union speech: ‘I’m not in a movie, I’m not iconic’
Next Article DirecTV latest network to drop RT amid Russian invasion of Ukraine