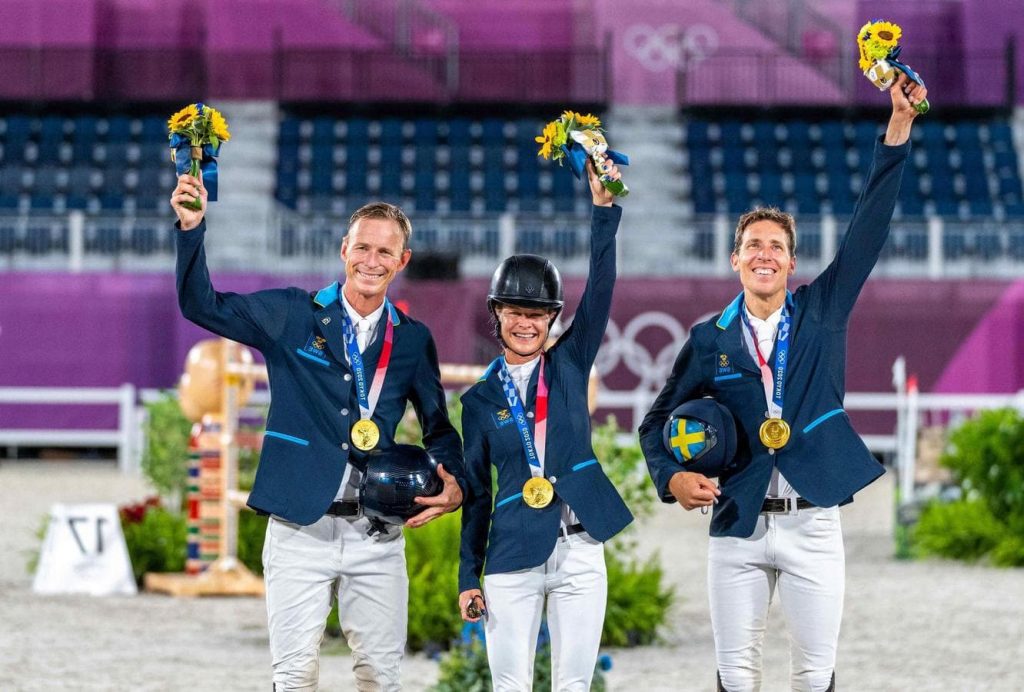 A Golden Moment for Swedish Showjumping

It’s almost a century since Sweden last won Olympic Jumping Team gold, and when they did it tonight they did it with both style and grace.

A magnificent performance all week from Henrik von Eckermann with King Edward, Malin Baryard-Johnson and Indiana and Peder Fredricson with All In led to high expectations that this could be the night they would bring the ultimate honour back to their country for the first time in 97 years. But it wouldn’t be easy.

Belgium was already assured of bronze when collecting 12 faults in the opening round. Team France looked set to be the biggest threat to all others when single time faults from both Simon Delestre and Berlux Z and Mathieu Billot
with Quel Filou, in the opening round left them sitting pretty before Penelope Leprevost set off. But elimination at the third fence for Vancouver de Lanlore shattered the French dream of repeating the glory they enjoyed five years ago in Rio de Janeiro.

So Pieter Devos (Claire Z), Jerome Guery (Quel Homme de Hus) and Gregory Wathelet (Nevados S) could sit back in the knowledge that the third step of the podium would belong to Belgium.

With all three team members returning to the ring for the final showdown it was Kraut who led the way for the USA with her 11-year-old gelding, scorching through the finish in 41.33 seconds to set the pace. And although Sweden’s von Eckermann took a new route he was a little slower when breaking the beam in 42.00 seconds with King Edward who, sensationally, never lowered a single pole in five rounds of tough jumping this week.

Springsteen returned clear for USA in 42.95 seconds so when Baryard-Johnsson was quicker, crossing the line in 41.89, the Swedes already had a small advantage. But Ward was next to go, and shaving seconds off all those ahead of him he raced through the finish in 39.92 to really put it up to Swedish anchorman Fredricson.

As he set off you could read the complete determination on Fredricson’s face. Did he feel the tension as he galloped down to the last fence, knowing what was hanging in the balance?

In the end just 1.3 penalty points separated the two sides, but the joy in the aftermath for both teams was palpable. They’d been in a fair fight and the best side had won. No hard feelings, just delight in great sport played out between great opponents.