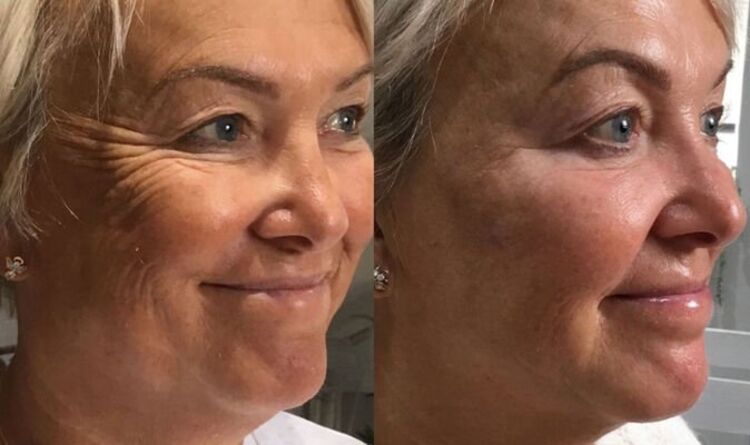 
Sue was always against having treatments done, but after a few subtle anti-ageing procedures including botox and filler, she said she’ll never look back.

She told Express.co.uk: “I always thought that I wouldn’t get it done because I didn’t like the look of other people I’d seen on TV.

“I thought it looked plastic, that their cheeks were puffed up like hamsters and their eyes looked small.”

But as she got older and her appearance became “tired”, she decided to take the plunge and go for some barely-there non-surgical ‘tweakments’ at CB Aesthetics in January of this year.

The thing that Sue liked most about her clinician, Alex, was that she was honest with her from the get-go, denying her any procedures around her mouth because she would “look like a monkey”.

Instead, she received filler around her eyes to lift her brows, as well as botox in her forehead to stop the muscles from further “drooping”.

She told Express.co.uk: “I was really, really pleased with it, very happy.

“I have absolutely noticed a difference.”

Sue reported that the treatment had practically zero recovery time; she simply went home to show her husband how young she looked!

And the reaction to Sue’s treatment has been nothing but positive – people cannot believe she is 62-years-old.

One night, after babysitting for a family friend, the children’s mother couldn’t help but ask Sue: “What have you had done?

“You’ve had the children all night so I thought you’d be exhausted but you look so fresh.”

“My friends all look at the before and after photographs and say, ‘Oh my god, how amazing!’ but you can’t really say to your friend’s, ‘You should do it too!’,” she joked.

Having the ‘tweakments’ has encouraged Sue to experiment with her clothing and also take care of her skin better, using SPF 20 on her face where before she used 10 – or none!

“I’ve spent all that money so I made sure to make the effort to make the best of my appearance.”

But the effects are not just skin deep, as the treatments have left Sue feeling super confident.

She said: “I don’t like looking older, but on the other hand I think, ‘Don’t be ungrateful’, because a lot of people don’t reach this age.

“I will never be grey though, who would want grey hair? Grey sky, grey hair – no thanks.”

While she will continue to top up her botox and filler when needed, she offered a warning to others thinking of undergoing cosmetic procedures: keep it natural.

“Remember Lesley Ash? she had her lips done and she looked terrible.

She continued: “I think programmes like The Only Way Is Essex and The X Factor don’t help because they promote this image of perfection.”

Sue urged young women to have critical view of the media before having non-surgical procedures or going under the knife: “All these people you see on television and on Facebook are photoshopped.”