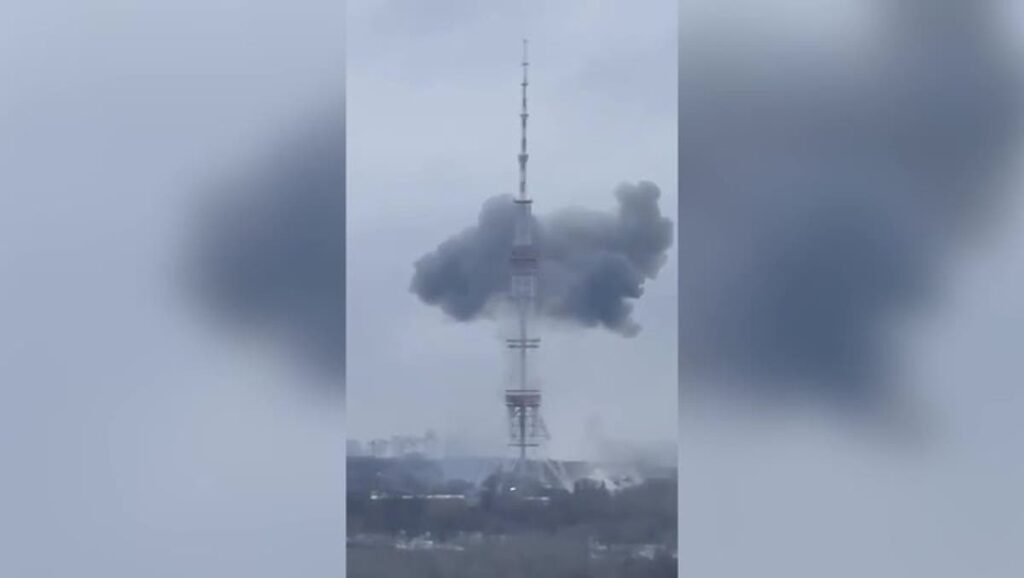 Five people have died in a Russian airstrike that damaged a Ukraine TV tower in Kyiv.

The death toll was given by emergency services, and reported by Ukrainian news agency Interfax.

Five other people were injured in the blast, that was launched by Vladimir Putin’s forces, officials have said.

The Ukraine Ministry of Internal Affairs said television channels would be off-air for a while after the explosion in the Shevchenkivsky district of the capital.

Anton Gerashchenko, adviser to the ministry, posted footage on social media of the attack that happened on the sixth day of the Russian invasion of Ukraine.

The Ukrainian foreign ministry said the TV tower is near a memorial site that commemorates the victims of Babyn Yar, one of the biggest single massacres of Jews during the Nazi Holocaust.

Earlier, Moscow urged residents to leave Kyiv while a huge Russian convoy of armoured vehicles, tanks and other military equipment spanning more than 40 miles has been seen in satellite images approaching the city.

Five people have died in a Russian airstrike that damaged a Ukraine TV tower in Kyiv.

The death toll was given by emergency services, and reported by Ukrainian news agency Interfax.

Five other people were injured in the blast, that was launched by Vladimir Putin’s forces, officials have said.

The Ukraine Ministry of Internal Affairs said television channels would be off-air for a while after the explosion in the Shevchenkivsky district of the capital.

Anton Gerashchenko, adviser to the ministry, posted footage on social media of the attack that happened on the sixth day of the Russian invasion of Ukraine.

The complex is needed to defend the territory of Belarus, the Belarusian leader was quoted as saying.

Lukashenko, addressing his security council on the sixth day of Russia’s invasion of Ukraine, pointed to a huge map of Ukraine during the meeting.

He insisted that he did not want to see the conflict turn into another world war, according to a translation of a press release about the meeting published on the Belarusian government’s website.

But Lukashenko said that he believes the death toll for Russian troops – reported to be more than 5,000 – is fake news.

He claimed, according to his office: “Don’t shout about thousands of dead. We don’t see it. And yet this direction (and they approached Kiev) is the most dangerous.”

“Over the entire period, we treated about 160-170 wounded,” the president added.

He also praised Ukrainian and Russian peace negotiators for having done “their job brilliantly” in talks at a location on the Belarusian border that ended without conclusion. Another round of talks is set to take place tomorrow.

Mamuka Mamulashvili, commander of the Georgian National Legion and former Georgian military officer, told The Independent that he had fought in conflict against Moscow four times before Russia began waging its “unfair war” on Ukraine last week.

But, with President Vladimir Putin’s troops continuing to lose battlegrounds to Ukrainian fighters, he said Russia has now resorted to bombing civilian areas and killing innocent men, women and children “to panic everybody”.

ESA astronaut Matthias Maurer was to participate in an in-flight question and answer séance on Thursday afternoon.

Ukraine children with cancer forced to hide in basements ‘won’t survive’ if they don’t get help, doctors warn

Ukrainian children suffering from cancer being forced to bunker down in hospital basements “will die” if the war with Russia continues to disrupt their treatment, doctors have warned.

Young cancer patients were suddenly moved down into the basement of Okhmadet Children’s Hospital in the Ukrainian capital of Kyiv to protect them from mass Russian shelling raining down on the country, writes Emily Atkinson.

As many as 15,000 soldiers would be part of the 40-mile long Russian convoy of troops heading to the Ukrainian capital of Kyiv, The Times has reported.

According to senior US defence officials, Russia has already moved around three-quarters of its 190,000 strong force into Ukraine.

France’s economy minister Bruno Le Maire has withdrawn the threat that he made earlier to “wage a total economic and financial war” on Russia.

He told AFP in a statement that the term was “was inappropriate and does not correspond to our de-escalation strategy… We are not in conflict with the Russian people.”

Mr Medvedev had tweeted: “Today, some French minister has said that they declared an economic war on Russia. Watch your tongue, gentlemen!

“And don’t forget that in human history, economic wars quite often turned into real ones”.

A TV tower in Kyiv has reportedly been attacked in a Russian strike, The Kyiv Independent is reporting. Ukrainian TV channels have allegedly stopped broadcasting, however the TV tower looks to be still standing in videos and photos on social media.

Ukrainian pharmacies could run out of insulin, experts warn

Russian attacks have reportedly cut off access to a key warehouse in Ukraine, which supplies insulin to the country’s pharmacies.

As a result of the invasion, pharmacies could run out of insulin within days.