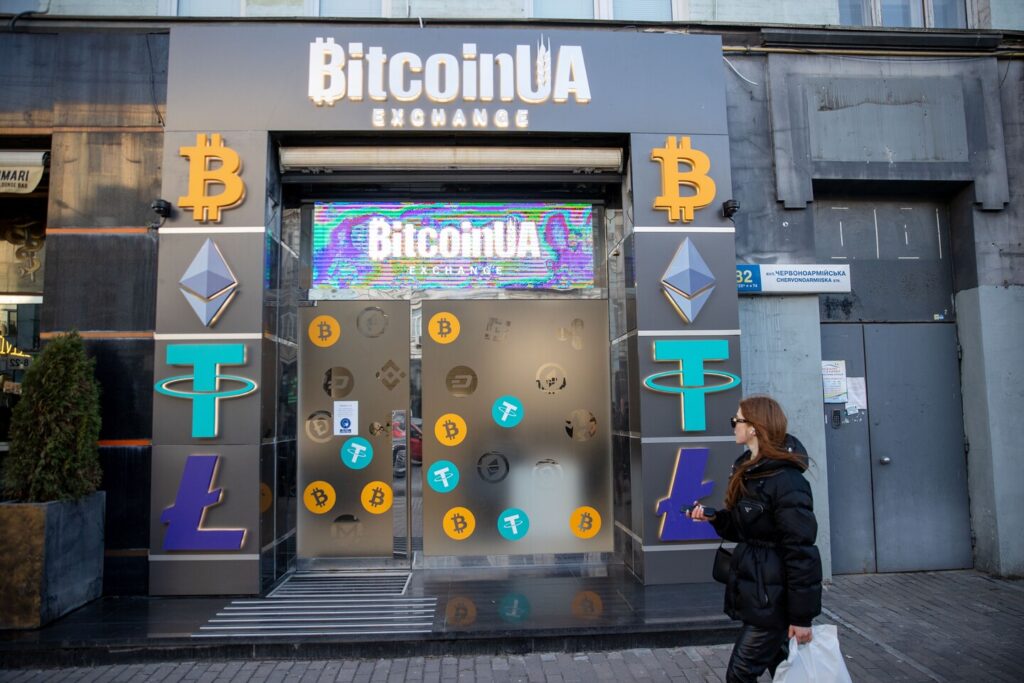 “We obviously can’t buy nuclear bombs or rockets,” said Kuna.io’s chief executive, Michael Chobanian. But “most nonlethal things you can buy with crypto.”

Cryptocurrency was expected to be a key variable in the war — both as a potential vehicle for Russia to evade sanctions and as a tool for supporters to fund the Ukrainians. But in the days since Russia invaded, the Ukrainian government’s embrace of crypto has grown more overt, attracting Western crypto evangelists who see a chance to battle-test their claims that blockchain technology can promote open societies.

The cryptocurrency donations are far smaller than President Biden’s authorization last week of $350 million in additional military aid to Ukraine and USAID’s pledge of $54 million in humanitarian aid.

Cryptocurrency has been the best way for Ukrainians to donate since the government instituted martial law on Feb. 24, which limited the ability to send or receive funds, said Sergey Vasylchuk, chief executive of Kyiv-based crypto company Everstake.

Proponents argue that cryptocurrency has enabled Ukraine to raise money without the restrictions imposed by government bureaucracy or centralized Silicon Valley tech platforms — and that blockchain’s public digital ledger of transactions offers more transparency for donors on how the money is spent. For example, GoFundMe and Patreon, which lets fans pay creators, prohibit military fundraising.

Tomicah Tillemann, a former staffer for Biden when he was a senator who now works as chief policy officer for a new crypto venture capital firm started by former federal prosecutor Katie Haun, called the outpouring of help to Ukraine a “vivid illustration” of the technology’s potential “to help strengthen open societies and safeguard democratic values.”

Tillemann said policymakers who specialize in security would rather have more financial activity flow to cryptocurrency because it is easier to trace. “It’s actually a massive step up from the pallets full of cash that were previously sent into conflict areas,” he said.

Crowdfunding war is not new to Ukraine, which used private donors to pay for military equipment after Russia seized Crimea. But skeptics wonder whether the focus on crypto could lead to more illicit activity — pointing out that the promise of transparency ends when it is converted into other currencies to purchase goods — or inspire authoritarian governments to try a similar approach.

Lee Reiners, a former senior associate at the Federal Reserve Bank of New York, was skeptical of the argument that cryptocurrency was necessary for donations. “Ukrainians are not the ones cut off from the global financial system, so there’s nothing stopping them from receiving donations via GoFundMe, the Red Cross, or any other platform and NGO,” Reiners wrote by email. The need to convert donations into traditional currency also undercuts the idea that cryptocurrency is somehow more decentralized, he said. “Last time I checked, you can’t buy Javelins [missiles] with bitcoin.”

The call for crypto support came from Ukraine’s 31-year-old deputy prime minister, Mykhailo Fedorov, who has been acting as the country’s chief digital agitator, pushing Silicon Valley titans to ban Russia from their platforms and services. Fedorov first posted a plea on the messaging app Telegram for crypto donations in bitcoin, ether or tether. Half an hour later, Fedorov posted the same thing from his Twitter account. A few hours later, it was on Ukraine’s official Twitter account.

Even the co-founder of Ethereum, Vitalik Buterin, wasn’t sure whether it was real, advising his 3 million Twitter followers to beware of scams. Buterin deleted his warning after confirming that the request was legitimate. “But continue to be vigilant, and always be slow and careful when sending irreversible crypto transactions,” he tweeted.

Donations quickly poured in from more than 46,000 people, most of whom gave a bit less than $100 — all recorded in the public ledgers that characterize cryptocurrency, according to a Washington Post analysis of public Ethereum blockchain data. But a few gave more than $250,000 in Ethereum, including two prominent CEOs of cryptocurrency businesses. Deepak Thapliyal, who made headlines last month after spending $23 million for a “Crypto Punk Alien” NFT digital collectible, donated about $290,000, and Sam Bankman-Fried, CEO of cryptocurrency exchange FTX, donated a large sum.

“I am glad Ukraine is utilizing the tools available to accept crypto donations as it shows how supportive the community is and how fast we can help them during a time of need,” Thapliyal told The Post in a statement. Bankman-Fried did not immediately respond to request for comment.

All that’s known about a third top donor, who gave about $280,000, is that their wallet (akin to a public bank account number) earned nearly $3 million in 17 minutes from the failed launch of a cryptocurrency in November 2021, drawing accusations of having been the beneficiary of a “rug pull” scam. Neither the identity of whoever controls the address, nor their location, nor anything else about them is recorded on the blockchain. Whoever controls the address did not respond to a request for comment from The Post via a blockchain chat service.

Ukraine, which hadn’t asked for NFTs, received a map of the Donetsk area of eastern Ukraine, parts of which have been controlled by Russian-backed separatists, in the colors of the Ukrainian flag, plus photos of blue and yellow peace signs and an animated “fire dragon.” NFT donations also included images from the Shibelon collection, which is “based on a mythology in which Elon Musk was granted genius powers by an alien, who also created bitcoin,” wrote journalist Jacob Silverman, who is working on a book about crypto.

Chobanian, the Kuna.io chief executive, said Ukraine has not needed to sell the NFTs yet because currency donations keep flooding in, but the government will sell them if needed. “It doesn’t matter, we can sell anything now,” he said.

Someone donated this Shibelon NFT to the Ukrainian government. The NFT collection is based on a mythology in which Elon Musk was granted genius powers by an alien, who also created bitcoin. Endorsements from Soulja Boy, The Game, and other celebs.https://t.co/0VQXhR7c9Z pic.twitter.com/M04KrK9IJc

In addition to well-established cryptocurrencies, Ukraine received donations denominated in almost 100 obscure digital currencies, according to a Post analysis of data from Etherscan. They included a new one named “Save Ukraine,” another with a racially abusive name, and several themed after crypto community in-jokes focused on dogs and Musk, the Tesla CEO.

The government’s strategy has been to convert less popular cryptocurrencies into traditional money first and hold bitcoin and ether in reserves because they are more stable and liquid, Chobanian said.

Donations were still streaming in as new efforts to raise crypto for the Ukraine government cropped up. Early Tuesday morning Ukraine time, Fedorov announced AidForUkraine, a joint effort to raise funds between his Digital Ministry, developers behind the Solana blockchain and Everstake. So far, AidForUkraine has raised $1.4 million, according to its website.

The speed with which the AidForUkraine fundraising effort came together was “magic,” said Everstake’s Vasylchuk, who fled Kyiv days before the invasion thanks to his pilot’s license and is in temporary housing in Florida. In a group chat on Signal, the encrypted messaging app, he and Anatoly Yakovenko, the Ukrainian American co-founder of Solana, spoke with members of Ukraine’s central bank, the Digital Ministry, FTX and others, Vasylchuk said.

But in perhaps the strangest turn yet, on early Wednesday morning, the Ukrainian government tweeted confirmation that there would be an “airdrop” for donors on Thursday, but it has yet to offer details about what that will entail. Airdrops, which promise to “drop” a token in the crypto wallet for participating consumers, are a popular way for crypto projects trying to lure in new users with the promise of a complimentary NFT, which could be used as a ticket or gating mechanism into future events or a collectible that increases in value over time.

“It wasn’t that long ago that when you said you were going to do an airdrop, you know, as a war torn country, [it] meant food and medicine were going to be literally dropped from the air to your people,” Cas Piancey, co-host of the podcast Crypto Critic, posted on Twitter. “Now it means the war torn country will create a token and give it away.”

But much as airdrops can spur onlookers to donate, they can also inspire “airdrop farming,” when crypto holders hoping to grab the reward do the bare minimum to participate. After the announcement, some 8,300 people donated less than $10.

Beyond the official government-led effort, Come Back Alive, an NGO benefiting Ukraine’s army, has also received millions in cryptocurrency donations — and is receiving millions more from “UkraineDAO,” a group organized on the blockchain that held an auction to raise funds, according to blockchain data.

The NGO organizers pivoted to crypto after their campaign was suspended from Patreon. But the DAO is limiting spending to helping the victims of war, the New York Times reported. Patreon spokesperson Ellen Satterwhite said that would “absolutely be allowable under our guidelines.”

Ukraine has not ruled out using donations to buy lethal weapons, Chobanian said, but he was not sure whether that was feasible. “Another day like this and we’ll be buying lethal weapons,” he said on Telegram from Ukraine early Tuesday morning.