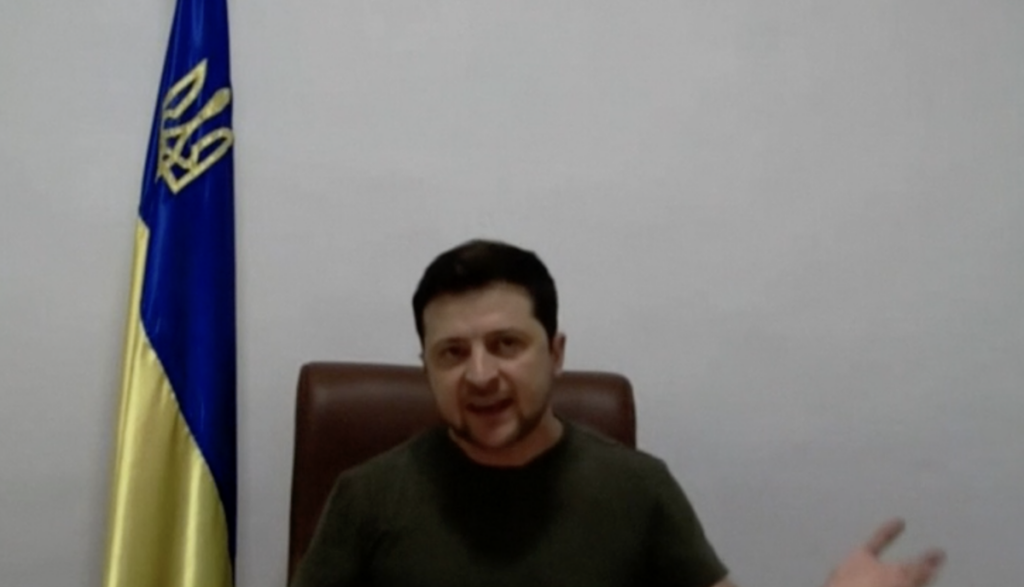 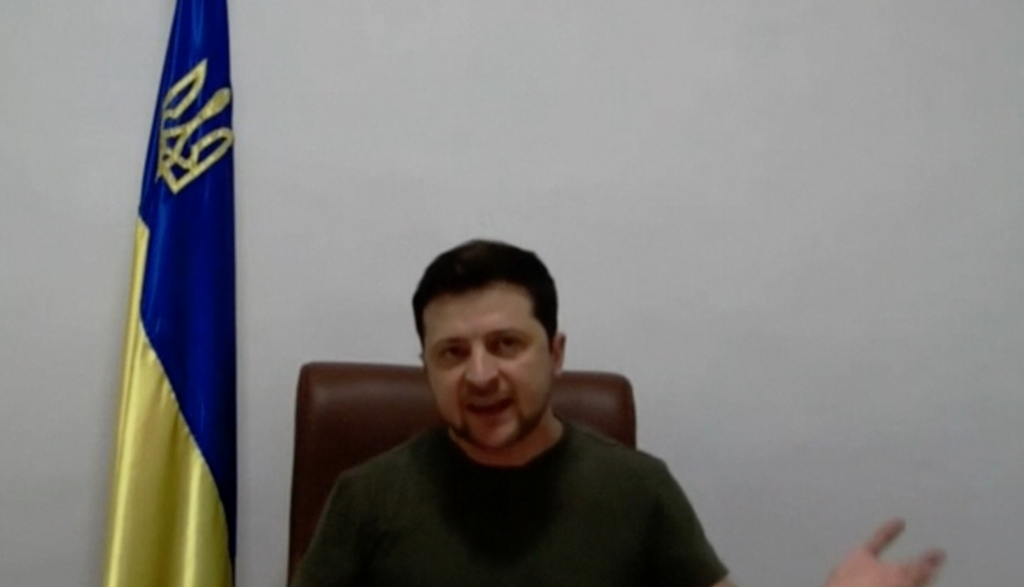 Speaking to the European Parliament via a video link, he called on member states to prove their loyalty to Ukraine in its war with Russia.

His powerful speech was met with a standing ovation from EU lawmakers, many of whom were dressed in #standwithUkraine T-shirts adorned with the Ukrainian flag, while others wore blue-and-yellow scarves or ribbons.

He continued: “My citizens are paying the ultimate price to defend freedom.

“I am very happy to sense this mood, that we have united today all of you in the European Union. But I did not know that this was the price we had to pay.

“Thousands of people killed, two revolutions, one war, and five days of full scale invasion by the Russian Federation.”

It comes after mass shelling hit the city of Kharkiv earlier today, killing dozens of people and injuring hundreds more.

The strikes arrived on the same day that peace talks began between delegates from Russia and Ukraine on the Belarusian border.

Reflecting on the tragic event, Zelensky said: “Today we are giving away our people to defend our values.

“Ukrainians are incredible and very often we like to say that we will win over everyone. I am very happy that you can see that.

“This morning was a very tragic one for us, two cruise missiles hit Kharkiv.

“More than twenty universities are there. Many Russians live there. The youth are bright and smart there, people would gather there for celebrations.

“The largest square in our country – Freedom Square – can you imagine this morning two cruise missiles hit it. This is the price of freedom that we are finding for our land and for our freedom.”

He added: “Every square in every city of our country will be called Freedom Square.”

According to a draft text to be voted on later today, EU lawmakers are set to call Russia a “rogue state” in the wake of its invasion of Ukraine.

It joins calls for the scope of sanctions to be broadened and “aimed at strategically weakening the Russian economy and industrial base, in particular the military-industrial complex.”

The draft resolution describes Zelensky as “heroic” in the face of Putin, who “recalls the most dreadful statements of 20th century dictators.”

The European Parliament will also urge EU leaders to be tougher on oligarchs and officials close to the Russian leadership, restrict oil and gas imports from Russia, ban Russia and its ally Belarus entirely from the Swift bank messaging system, and to close all EU ports to Russian ships or ships headed to or from Russia.

“The message from Europe is clear. We will stand up, we will not look away when those fighting in the street for our values stand down Putin’s war machine,” EU Parliament President Roberta Metsola said, speaking in front of the EU and Ukrainian flags.

With additonal reporting from the Associated Press