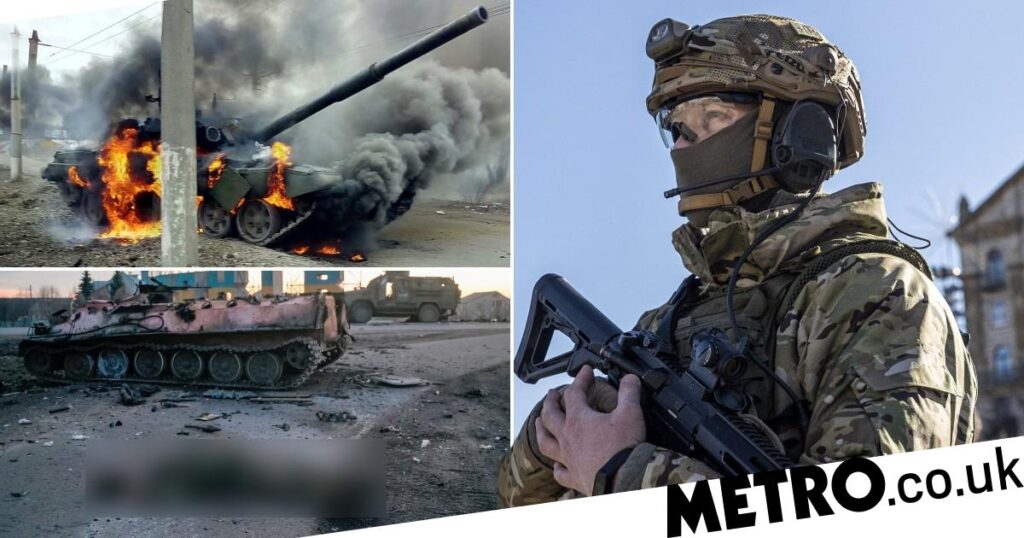 With Russia’s forces bearing down on the capital Kyiv and the second largest city, Kharkiv, Ukraine gave a run-down of Russia’s losses.

Ukraine’s general staff claimed it had damaged or destroyed 29 Russian aircraft and 198 tanks and that 5,710 Russian soldiers had been killed.

It was not clear how those figures were arrived at and it is not possible to verify them.

President Putin’s government has refused to say how many losses it has sustained.

But picctures from Ukraine have shown burnt-out Russian tanks and bodies on the road, seemingly after they have been attacked by Ukrainians.

It comes as fears grow for the immediate future of Ukrainians in the capital, with a Russian convoy thought to be around 40 miles long making its way towards the city, where food supplies are running low.

Meanwhile, in Kharkiv, a huge missiles smashed into a government building as airstrikes intensified.

International condemnation and sanctions have continued, with Russia now set to be investigated for possible war crimes.

Prince Charles joined the chorus of outrage aimed at Putin, branding the war an ‘unconscionable’ attack on democracy.

On the sixth day of the Russian assault, rocket strikes on the centre of Kharkiv killed at least 10 people and wounded 35, Ukrainian Interior Ministry adviser Anton Herashchenko said.

Similar strikes killed and wounded dozens in the city the previous day.

Ukrainian authorities also reported 70 soldiers killed in a rocket attack in a town between Kyiv and Kharkiv.

He added: ‘The rubble is being cleared and there will be even more victims and wounded’.

Yet Russia has failed to capture a single major Ukrainian city after running into fierce resistance and its economy is being battered.

But pictures released by U.S. satellite company Maxar showed Russian tanks, artillery and fuel trucks stretching for 40 miles (60 km) along a highway to the north.

Talks held on Monday at the Belarus border have failed to reach a breakthrough and negotiators have not said when a new round will take place.


MORE : Zelensky translator chokes up after Ukraine president says ‘nobody will break us’