Petrol POLL: Will you consider GIVING UP your car as petrol hits £2 a litre? 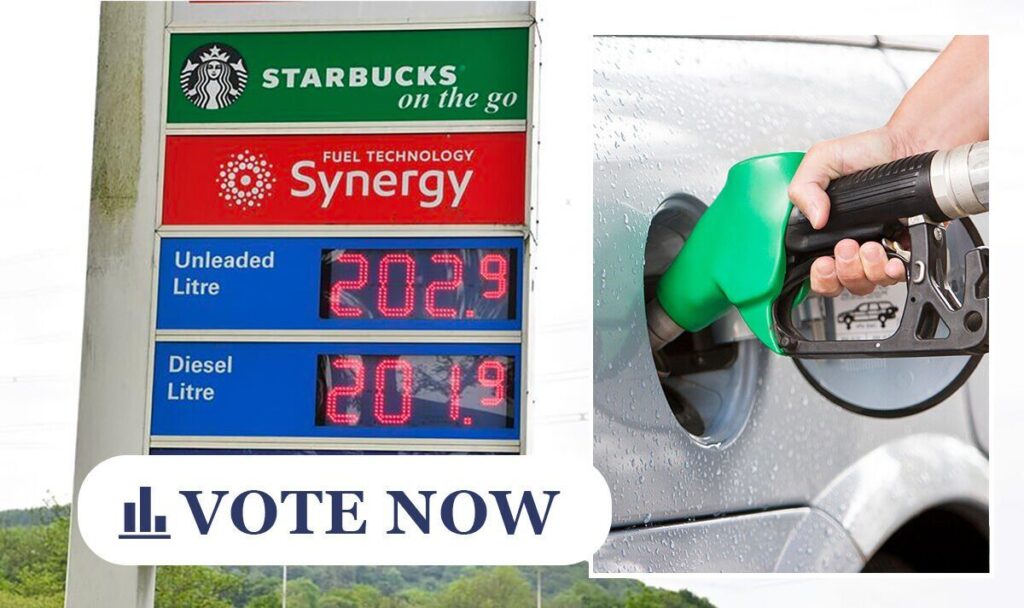 
For the first time, petrol prices in Wales broke the £2 a litre barrier at Carmarthenshire’s Pont Abraham services on the M4. On the morning of Tuesday, June 7, the price of unleaded petrol was more expensive than diesel at 202.9p a litre compared to 201.9p.

Fuel prices across the UK continue to soar with the RAC declaring a national fuel crisis, urging the Government to intervene.

The Jubilee bank holiday weekend saw the price of petrol increase by almost 6p a litre at some forecourts.

The average price of unleaded petrol on Sunday, June 5, according to data firm Experian Catalist was 177.9p per litre, an increase from 172.1p on Friday, May 27.

Diesel also increased to 185p per litre from 182.7p in the same period.

This makes the cost of filling a typical 55-litre family car £3 more expensive in a week.

The RAC fuel spokesperson, Simon Williams, shared the fury of drivers and demanded the Government take action in addition to the 5p-a-litre cut in fuel duty earlier this year.

He said: “Sadly, we expect to see the average price of petrol break through the 180p mark this week, with diesel moving further towards 190p.

“More radical Government intervention is urgently needed, whether that’s in the form of a further reduction in fuel duty or a VAT cut. As it is, drivers surely won’t be able to cope unless something is done to help.

“This is fast becoming a national crisis for the country’s 32 million car drivers as well as countless businesses.”

Luke Bosdet, AA fuel price spokesman, described that there was “shock and awe” at the prices at forecourts.

He added: “Little wonder that nearly half of drivers stayed at home for the Jubilee extended bank holiday.

“The forces behind the surge have been oil jumping back above 120 US dollars a barrel for the first time since late March, combined with petrol commodity prices being boosted by summer motoring demand.”

So how about YOU? Will you consider giving up your car as petrol hits £2 a litre? Vote in our poll and leave your thoughts in the comment section below.