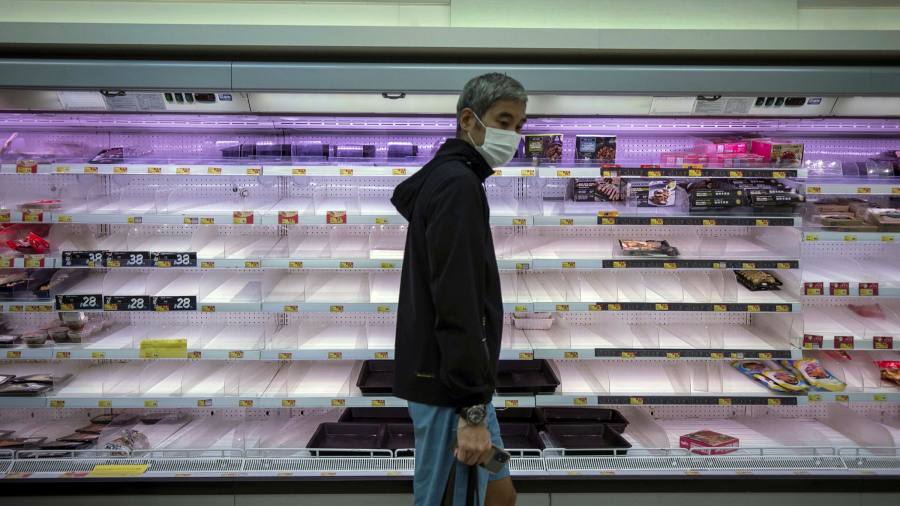 
Panic buying in Hong Kong has cleared supermarket shelves and long queues have formed outside banks and pharmacies as residents stocked up in anticipation of a citywide lockdown in the coming weeks.

Three senior advisers to Carrie Lam, Hong Kong’s chief executive, told the Financial Times that a “limited lockdown” would be necessary when the city begins mandatory mass testing later this month in an effort to quell China’s worst ever Covid-19 outbreak. The city’s stock market and other financial systems would continue to operate, they added, and essential workers would be exempted from the lockdown.

Lam had previously said the government would not impose a citywide lockdown but experts said it might be inevitable if Hong Kong was to adhere to China’s zero-Covid policy.

A shopper surnamed Wong said his family bought a week’s worth of groceries on Tuesday after reading the reports about a potential lockdown. “Many are worried about the stability of food supply,” he said.

Hong Kong has been hit by a surge in infections that has overwhelmed the healthcare system. Authorities reported 32,597 Covid cases on Tuesday, while the total number of infections during the current wave surpassed 220,000. The fatality rate has also risen, filling mortuaries.

Specific details about the lockdown have not been decided as the logistics will hinge on assistance from mainland authorities, but it could last for at least a week as all 7.4mn of Hong Kong’s residents are tested three times this month.

“The main goal of the mass testing drive is to achieve zero-Covid,” Lam told reporters this week. “It needs to be quick and should not drag on too long . . . But we do need to seriously assess the scale of restricting people’s movements.”

“It’s likely to be citywide,” said Ronny Tong, who sits on Lam’s executive council, the body that advises Hong Kong’s leader. “Any [lockdown] will allow exceptions for essential services and allow people to obtain daily necessities and food.”

“More and more people . . . think that short pain is better than long pain,” added Martin Liao, another member of the executive council.

China’s President Xi Jinping last month told the city to make fighting the pandemic its “overriding mission” and top mainland epidemiologists have been dispatched to help contain the outbreak. They include Liang Wannian, leader of China’s Covid response team who was in Wuhan during the first wave of infections in 2020 and arrived in Hong Kong on Monday.

Beijing is also helping to build temporary isolation facilities and makeshift hospitals so that anyone who tests positive, even if they are asymptomatic, can be placed in quarantine. 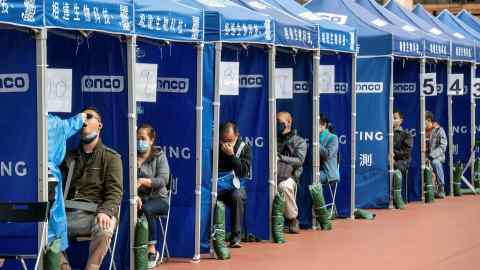 Tens of thousands of residents have fled the city because of the stringent Covid measures, with official figures showing a net outflow of 65,295 residents in February, up from about 14,000 the previous month. Some multinational companies have temporarily relocated senior executives out of Hong Kong.

Economists at Bank of America on Tuesday downgraded their forecast for annual GDP growth to 1.6 per cent from 2.2 per cent and predicted a 1.1 per cent year-on-year contraction in the first quarter. “If the Covid wave lasts longer, we expect resident departures to double to around 2 to 3 per cent of the population per month,” they added.

Zeng Guang, chief epidemiologist of China’s Centre for Disease Control and Prevention, published an article on Monday suggesting that the country’s zero-Covid strategy — that Hong Kong is following — might not remain in place forever.