Mozambique’s ‘trial of the century’ puts elite under pressure 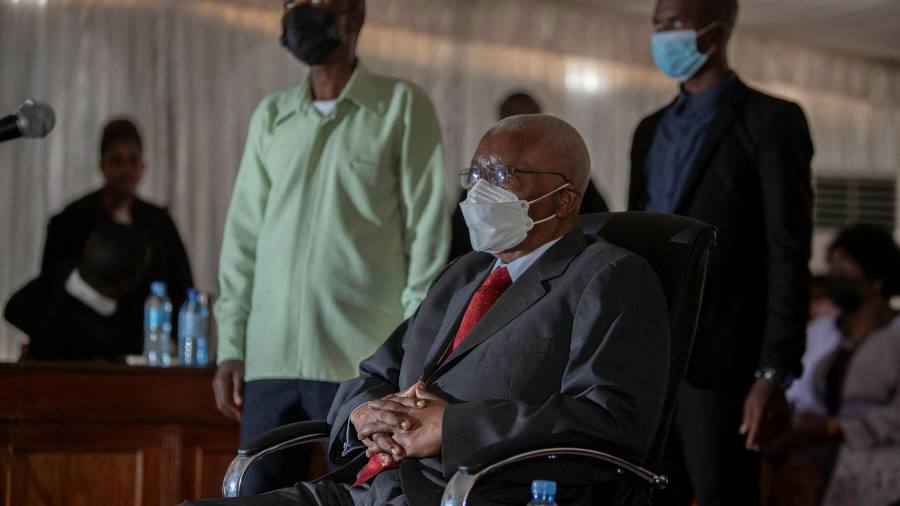 
With 19 high profile defendants and huge public interest, the only place in Mozambique deemed big enough for its blockbuster corruption trial was a maximum-security prison on the outskirts of Maputo.

Over the past several weeks, ordinary Mozambicans have been glued to the television for the so-called “trial of the century”, an attempt to hold the country’s elite to account for more than $2bn of fraudulent debt that ultimately bankrupted the resource-rich country.

Viewers have been rewarded with drama galore. There was an attempt to cut an electricity transformer at the prison and what many saw as a suspiciously well-timed power cut, all allegedly designed to stop the broadcast of criticism of President Filipe Nyusi by his rival and predecessor Armando Guebuza.

Nyusi, who was defence minister at the time the loans were taken out, “says that he knows nothing” about what happened, said Guebuza, whose son is one of the defendants and allegedly received Ferraris, BMWs and Rolls-Royces as kickbacks for the fraudulent deal. “This is strange.”

This month’s attack by Guebuza on his chosen successor makes it clear how much is at stake. The two men fell out over the scandal and the outcome will be critical to a power struggle in the ruling party Frelimo.

Nyusi is not on trial and has denied any wrongdoing. Analysts warn that the trial could prompt Nyusi, who succeeded Guebuza in 2015, to seek an unprecedented third term in the hope that he would avoid judicial scrutiny.

Little wonder, analysts have said, that Nyusi had not appeared in court as a witness. “There’s no chance, [Nyusi testifying] won’t happen,” said Denise Namburete, a longtime campaigner over the hidden debts.

Despite requests by lawyers, the judge has repeatedly ruled out calling Nyusi to testify. At the beginning of the trial, the judge made his independence clear. But Nyusi’s refusal to appear in court is a sign “that the Mozambican state is captured”, said Ossufo Momade, leader of the main opposition party Renamo.

The scandal dates back nearly a decade to a bond that Mozambique sold to international investors to fund what was described as a tuna fishery, including boats. The “tuna bond” concealed another $1bn of loans for maritime security projects that were only revealed years later.

The boats were hardly used and the companies eventually collapsed. The fraud forced Credit Suisse, the main arranger of the loans, to admit a “global criminal conspiracy to defraud investors” last year in a nearly $500mn settlement of allegations with US and UK authorities.

Nyusi has said that he did not know about the tuna fishery until he was president, despite its bond being sold on international markets years earlier. Privinvest, the Gulf-based supplier of the tuna boats, has said it donated $1mn to Nyusi in 2014. Privinvest denies overcharging and any wrongdoing.

By contrast, Guebuza has admitted authorising the companies behind the loans as a “matter of defence and security . . . we have to defend our sovereignty’ and the debts funded projects to defend against threats to Mozambique, he said. Guebuza referred questions about the projects to the head of “operational command” at the time — Nyusi.

As Guebuza was testifying, Nyusi was flying abroad to seek EU funding to combat Islamist insurgents in the northern Cabo Delgado province. International oil companies suspended offshore gas projects last year because of the fighting. Nyusi has brought in troops from Rwanda and elsewhere to push the insurgents back, but Total has said that more needs to be done before it revives what is Africa’s biggest-ever private investment.

In talks with the EU, the president is keen to present the hidden debt looting as a “past mistake”, said Adriano Nuvunga, director of the Centre for Democracy and Development, a Mozambican NGO. The slowdown after the debt crisis ultimately cost the country $11bn as outraged international donors halted direct aid, investment stopped and state spending shrivelled, according to estimates by Mozambique’s Centre for Public Integrity and the Norway’s Chr. Michelsen Institute. Unless Mozambique successfully sues Credit Suisse — the arranger of the loan — for damages, it may still have to repay the debt, said Nuvunga.

With appeals, the case could run for many more years. Activists believe that this would provide an incentive to Nyusi to change Mozambique’s constitution to allow him to run for a third term when his second term runs out in 2024. He would be the first Mozambican president to do so since the end of the civil war in 1992.

“Some followers of Nyusi are campaigning for a third term so that he can continue in power and avoid any questioning,” Namburete said. It would be fiercely opposed, she added. “Guebuza is still very strong in the party.”

Still, Nyusi’s grip on power has been strengthened by his role in fighting the Cabo Delgado war. Aid cuts have left international donors with less leverage to oppose tearing up the term limit, Nuvunga said. “Within Frelimo, the capacity to counter him has significantly diminished,” he added.