Cappadocia: One of Turkey’s most spectacular hiking destinations 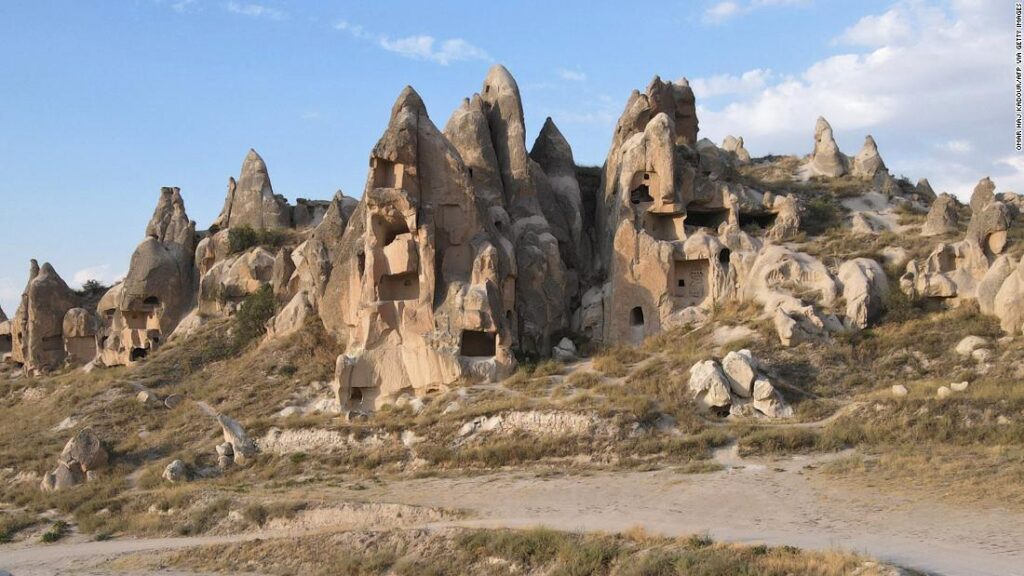 This is Cappadocia, central Turkey, famous for its whimsical “fairy chimneys,” to give peribacı their English name.

Cappadocia has an abundance of them, as well as rock churches and monasteries. The region is dotted with former farming communities with dwellings and outbuildings carved out of stone, where ordinary people lived next door to monks.

When the volcanic ash cooled down, it left behind soft porous rock called tufa. Over thousands of years the tufa was eroded and shaped by water and wind.

It’s easy to carve but hardens on exposure to air. Until the 1950s most of the population lived in these surreal rock formations, a tradition dating back centuries.

Now they’re one of Turkey’s most striking tourist attractions, often viewed from the air by the floating legions of hot air balloons that regularly fill the sky.

But, say locals, the real way to appreciate all this is on foot — or hoof. Here are some of the best options for exploring Cappadocia:

Cappadocia is often explored by visitors in hot air balloons, but is just as captivating on food.

This archaeological treasure trove offers the chance to experience a typical rural settlement, including a look inside ancient houses, stables, kitchen, churches and monastic chambers carved out of fairy chimneys and rock faces.

Here it’s possible to imagine what Cappadocia’s fairy chimneys looked like when Orthodox Christianity was at its height during the medieval Byzantine period.

“Zelve was permanently occupied from the sixth century to the 20th century, which is something amazing,” says Tolga Uyar, a medieval art historian at nearby Nevşehir Hacı Bektaş Veli University. That’s more than 1,400 hundred years.

Like most of the inhabited caves in Cappadocia, spaces were re-used, re-carved and transformed. Now Zelve is a model of a rock carved civilization preserved from early Christian times through to the modern Turkish Republic.

Clearly marked paths make Zelve easy to get around and give an idea of what you’re likely to come across elsewhere in the valleys.

The otherworldly, magical landscape of Cappadocia, Turkey, is home to ancient secrets and enchanting stories.

In summer, much of Cappadocia appears arid and lifeless. The plains on the approach to Ihlara Vadısı seem no different, until you peer over the edge and see the tops of the lush green trees lining the Melendiz River below.

The length of Ihlara Valley stretches along its banks, the location of a pleasant eight-mile hike beginning at Ihlara Village and ending at Selime Manastırı.

In early spring, bush nightingales warble love songs, flowers dance to the “oop oop” call of the ibibik or hoopoe bird, and the burble of water lulls you into a contemplative silence.

Like anywhere in Cappadocia there are centuries-old churches decorated with murals.

There are picnic spots or small restaurants on the banks of the river in Belisırma for lunch.

At the point where the valley opens up, the imposing Selime Monastery, believed to date from the eight or ninth century BCE, comes into view. It’s worth climbing the 300 steps to look inside.

The landscape has been carved by thousands of years of erosion.

Several walks start from Çavuşin, a village once home to a mix of Turkish Muslims and Orthodox Christian Greeks known as Rum.

Here, the huge Church of John the Baptist, dating from the fifth century, is the biggest cave church in the region.

Hikers should head up through the village to the cemetery, where a track leads to Kızılçukur. It meanders through orchards filled with apple and apricot trees and skirts fields of grapes, ripening on the vine.

There are several old churches along the way, the most famous being Üzümlü Kilise (Church of the Grapes). At Kızılçukur (Red Valley), the fairy chimneys are pinkish in color by day and take on a beautiful red hue at sunset due to iron ore in the tufa.

It’s possible to follow the track on your own, but many of the churches are either hard to find or locked. Having a Turkish speaking guide that knows who to ask for the key makes for a richer, more rewarding experience.

It’s recommended to go hiking with a guide to get the most from the region.

One such guide is Mehmet Güngör who, since 1998, has run Walking Mehmet in the small town of Göreme where he still lives in a home partly carved out of rock.

He started by chance. “One day I met a couple (of tourists) and we walked with my dog for a few hours,” he says. “At the end they gave me a tip. Then I decided to be a walking guide.”

Güngör’s been sharing knowledge about his favorite places ever since.

Over the last 25 years he’s seen locals move from farming to tourism. Cleansed of agricultural additives, the landscape has transformed with the reappearance of species of flora and fauna long thought to have vanished.

In spring, rare iris galatica bloom. The dark blue or purple petals of these flowers, highlighted with pops of yellow, spring from narrow crevices. Güngör knows where to find them, along with wild asparagus, orchids and thyme.

On your own, if you’re lucky, you might spot a tortoise hiding under a bush or an eagle hovering in the sky. With Güngör, hikers “will see churches and monasteries from the fifth, sixth and seventh centuries they won’t be able to find on their own.”

He also does full moon night walks, hikes that give the best light for photographing the valleys, or ones suitable for hot days.

Güngör loves what he does because guiding tourists through the valleys is more than a job, he says.

“Cappadocia is like no other place. It’s full of positive energy. While walking I become one with nature.”

People have lived in caves in Cappadocia for centuries.

For those that don’t want to walk, there are horse tours. Cappadocia has long been referred to as the “land of wild horses” after free-roaming animals known as yılkı.

Prior to the mechanization of agriculture, working horses on farms were turned loose in winter when the harvest was over, to roam at will. In spring, they’d be rounded up and put to work again, but once tractors replaced them permanently, they were left to fend for themselves.

The horses at Cemal Ranch are anything but wild and are well-looked after all year round.

Cemal Koksal, born and raised in the nearby town of Ortahisar, is passionate about the business he established 15 years ago with his brother and horse-breeding father.

“The peace and naturalness of horse riding in such a unique and fascinating landscape on my favorite horse helps to keep me close to nature and close to my family roots of breeding and working with horses,” he says.

Cemal Ranch runs different small group tours (maximum 14 people) suitable for beginners, even children, right through to more experienced riders. Everyone gets a short training session before any tour and helmets are obligatory.

Participants on longer tours get to sample food cooked by Koksal’s mom.

It’s the only horse trekking outfit with sunset access to Cappadocia’s Rose and Red valleys. “Looking down on all the stunning valleys as they change colors in the sunset light is magical.”

He adds: “I am the happiest on a horse and happiest riding in the beautiful valleys of Cappadocia. It’s the ultimate freedom and peacefulness”.

Lisa Morrow is a freelance writer and sociologist living in Istanbul, Turkey. Her writing has been published in The New York Times, Guardian UK, BBC Travel, World Nomads, Fodors and Hyperallergic. She’s also the author of four books, the latest being “Longing for Istanbul: The Words I Haven’t Said Yet.”