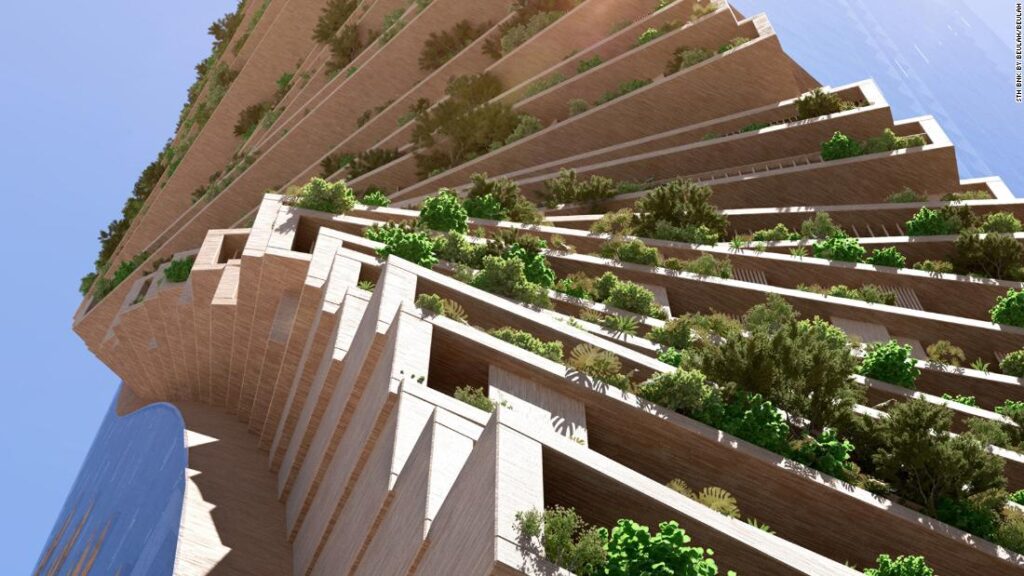 
(CNN) — Imagine a 5.5 kilometer garden path (3.51 miles), about twice the length of New York’s High Line, sprawling up the twisted façades of two towers, one of which rises more than 300 meters into the sky.
That’s what will greet visitors to STH BNK by Beulah — a new dual-tower “greenscraper” complex planned for Melbourne that’s set to include the tallest building in Australia when complete in 2028.

Better yet, travelers will be able to spend the night in it when visiting the country’s second most populated city.

Four Seasons Hotels and Resorts announced this week that Four Seasons Melbourne will occupy the top floors of the western tower — the shorter of the two — of this unique project.

Travelers will enter the 210-room hotel through a Sky Lobby situated on the 63rd floor. While the hotel brand hasn’t disclosed the number of floors it will occupy, the announcement says there will be health and wellness experiences, multiple event spaces and a rooftop restaurant and bar.

The upcoming Four Seasons Melbourne will have 210 rooms and sit atop the western tower.

“This project will set a new standard for luxury in Melbourne, offering guests an exceptional Four Seasons experience set within an environment that will be unmatched in this market,” says Bart Carnahan, president of global business development for Four Seasons Hotels and Resorts, in a statement.

Currently, the highest hotel in the world is J Hotel in Shanghai. It takes up the top floors of the 632-meter Shanghai Tower.

STH BNK by Beulah will set a few records of its own.

With a staggering estimated investment of AUD2.7billion (or $1.9 billion), it’s composed of two high-rises.

The taller tower will rise 365 meters over the Southbank District in Melbourne. It will surpass the 322.5-meter-tall Q1 Tower on the Gold Coast to claim the title of the tallest building in Australia. According to the Council on Tall Buildings and Urban Habitat, the second tower will be 273 meters tall.

But the design is what really sets it apart.

Dubbing itself the “world’s tallest greenscraper,” the façades of the two high-rises will feature terrace tree gardens on the high floors, and fern and shrub gardens on the lower floors.