Americans Are Going Everywhere Except Back to the Office 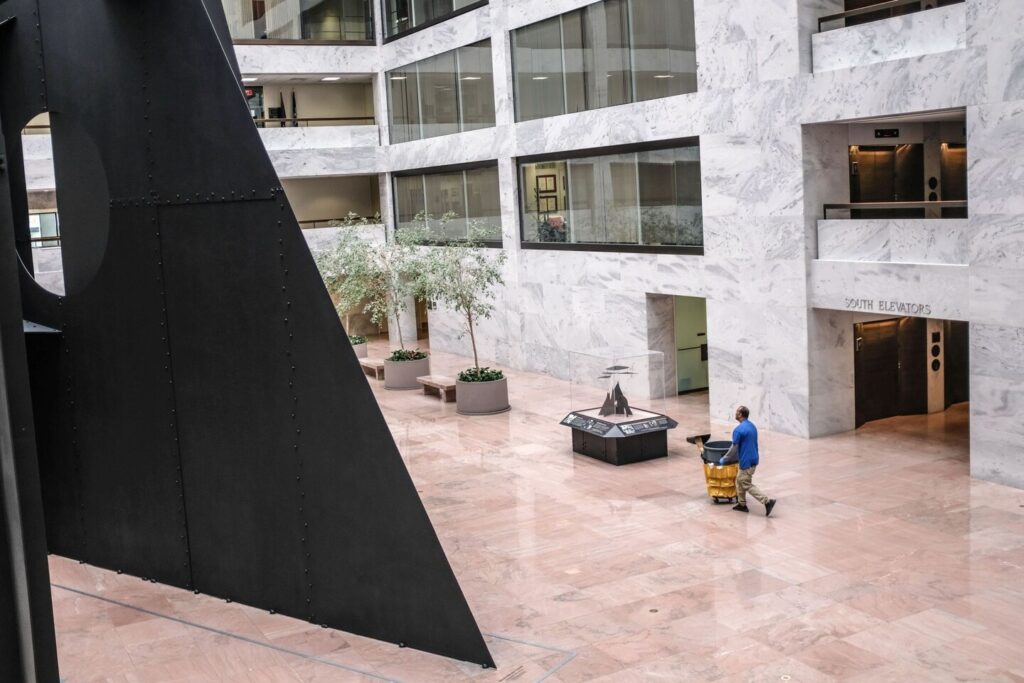 Kastle Systems has been tracking America’s return to work since early in the Covid-19 pandemic to gauge where, or whether, people are going back into the office. By scouring key-card and mobile phone-access data in 10 key cities, we can see where office life is getting back to some semblance of normal (as in Texas) and where offices remain largely vacant (as in California). We can even see trends within industries: Law firms have meaningfully higher rates of occupancy than other sectors. The data represent a cross-section of American businesses, with no sector dominating our analyses.

What we’ve found — and this has been consistent for the past year — is that offices remain largely empty. This past week, our Back to Work Barometer showed that the average of the 10 cities we analyze had an office utilization of just over 36.8% compared with pre-pandemic levels.

While many people are still worried about catching Covid-19, I would argue that fear of the virus is not to blame for empty offices. That’s because Americans are embracing many other aspects of their pre-pandemic lives — they’re going to airports, movie theaters, restaurants, schools and sporting venues.

In December, just as omicron was beginning to sweep the country, Open Table reported that restaurant reservations in New York City were back to 100% of pre-pandemic levels, and about 99% of U.S. schools had returned to in-person learning. TSA reported that domestic airline travel was approaching pre-pandemic levels and NFL and NBA attendance nearly matched 2019 numbers. Spider-Man had the second largest opening movie weekend in history. Music concerts, which were essentially shut down in 2020, began their robust comeback in 2021, and Pollstar, which collects and analyzes music industry data, is projecting a record-setting year in 2022. New York City subway ridership — a fair measure of activity in America’s largest metropolis — has returned to about 60% of pre-pandemic levels, even as the city’s office occupancy last week was just over 30% of prior levels. Even Broadway sales have returned to about 80% of seating capacity. Omicron dented these numbers, but they’re already rebounding.

This return to pre-pandemic norms eludes the workplace, even though testing, masking and vaccination requirements make the office arguably one of the safest and easiest-to-control environments. But offices remain empty because workers have become accustomed to their new work patterns and habits, including less commuting time. In this tight labor market, employees are getting a lot of what they want.

A recent Pew poll confirmed that the reluctance to return to the office is no longer primarily about fears of Covid, but instead a desire to balance work and personal life. Yet there is a cost: Pew also found that six in 10 people who are new to the work-from-home experience say they feel less connected to their coworkers.

This seismic shift has implications for America’s cities, office culture and, most profoundly, the American worker, who is reporting high levels of burnout. In a study last fall by the Conference Board, a think tank, three-quarters of 1,800 American workers surveyed said stress and burnout were the greatest challenges to their well-being, a jump from 55% just six months earlier.

Of course, there are many reasons the past two years have been stressful. Workers have had to cope with the mental strains of living through a pandemic, juggling dwindling childcare options and swimming in a sea of uncertainty. But our jobs have also become roller coasters: Zoom fatigue, hastily constructed hybrid work models, and ever-moving return-to-office dates. The solitude of remote work and the lack of in-person connection with colleagues takes a toll.

Some of us may never go back to five full days at the office, but we must not lose sight of the fact that the office is still vital for most organizations. Humans crave socialization and connection. Even office small talk has been found to lift employees’ moods.

Business leaders need to get their employees back. Remote work might have some advantages, but it’s coming at the cost of our relationships with each other and our ability to collaborate, on-board and mentor our teams. Employers should continue to be flexible and empathetic, but it’s time to remind workers that being together is important.

What’s the Point of the Office Again?: Sarah Green Carmichael

Unions Are on the Rise, But So Are the Robots: Brooke Sutherland

Mark D. Ein is chairman of Kastle Systems, which provides managed security services for commercial office space in the U.S.