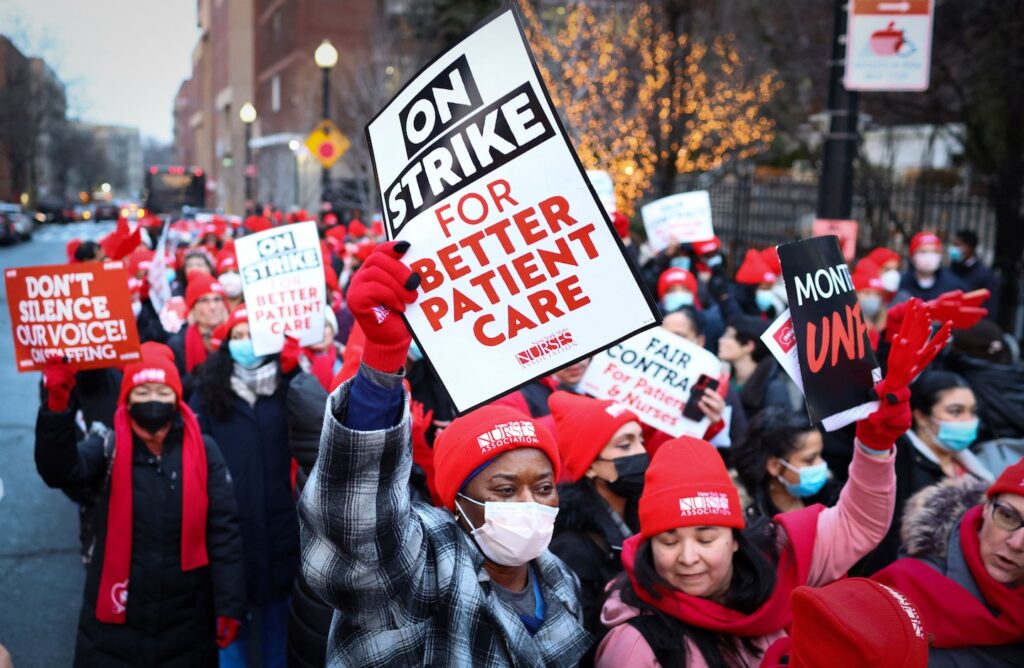 More than 7,000 nurses at two major New York hospital systems walked off the job early Monday after talks broke down overnight, digging in on staffing and workloads they contend have overwhelmed their ranks during the pandemic and beyond.

Representatives from both hospitals said the union rejected a nearly 20-percent wage increase that nurses at peer institutions accepted in earlier bargaining talks.

New York Mayor Eric Adams (D) in a statement urged all parties to “remain at the bargaining table for however long it takes to reach a voluntary agreement.”

The strike comes as the Northeast is bracing for a potential wave of covid-19 cases wrought by the XBB. 1.5 variant, an offshoot of the omicron variant that set off a spike in infections after the 2021-22 holiday season. Infections from the new variant have swelled from barely 2 percent of U.S. cases at the start of December to more than 27 percent the first week of January, according to estimates by the U.S. Centers for Disease Control and Prevention.

New variant XBB.1.5 is ‘most transmissible’ yet, could fuel covid wave

Nursing unions across the country have pushed for more staffing since the pandemic took hold in 2020, citing burnout they contend has hindered patient care and placed health care professionals in harm’s way.

New York nurses reached agreements with seven other hospitals around a common bargaining framework. They will get close to a 20-percent salary increase over three years, and the hospitals agreed to higher staffing standards.

“Since [New York City] nurses started negotiating our contracts four months ago, we have said our number one issue is the crisis of chronic understaffing that harms patient care,” New York State Nurses Association President Nancy Hagans told reporters Friday. “Safe staffing is about having enough nurses to deliver safe, quality care to every patient. It is the issue that our employers have ignored, made excuses about, and fought against us on.”

The nurses decided to “walk away from the bedsides of the patients,” Montefiore said in statement, a move that “will spark fear and uncertainty across our community.”

“Our first priority is the safety of our patients. We’re prepared to minimize disruption, and we encourage Mount Sinai nurses to continue providing the world-class care they’re known for, in spite of NYSNA’s strike,” Lee, the Mount Sinai spokeswoman, said in a statement.

In a Twitter post, the union said that patients going to either hospital system “is NOT crossing our strike line.” It invited patients to join demonstrations after receiving care.

“Nurses have been through hell and back for their patients,” Rep. Jamaal Bowman (D-N.Y.) said in a statement. “They already fought unimaginable fights to keep us healthy and alive, and they shouldn’t have to keep fighting. Safe staffing ratios and healthy conditions common in every hospital.”

The U.S. health care system is already facing a shortage of nurses. From 2020 to 2021, the total number of registered nurses in the country fell by 100,000, according to an April study published in the journal Health Affairs.

The American Association of Colleges of Nursing found that nursing schools turned away 91,938 applicants to nursing programs in 2021 due to a lack of qualified instructors.

The shortages may well get worse: The average age of a registered nurse is 52, according to the National Council of State Boards of Nursing. By comparison, it’s younger than 42 for the rest of the U.S. workforce, according to federal data. That suggests a coming retirement boom among nurses, experts say, unless health care employers boost recruiting or retention efforts.

Fenit Nirappil and Lauren Weber contributed to this report.