US tuberculosis rates went up more than 9% in 2021 after plummeting early in pandemic, study shows 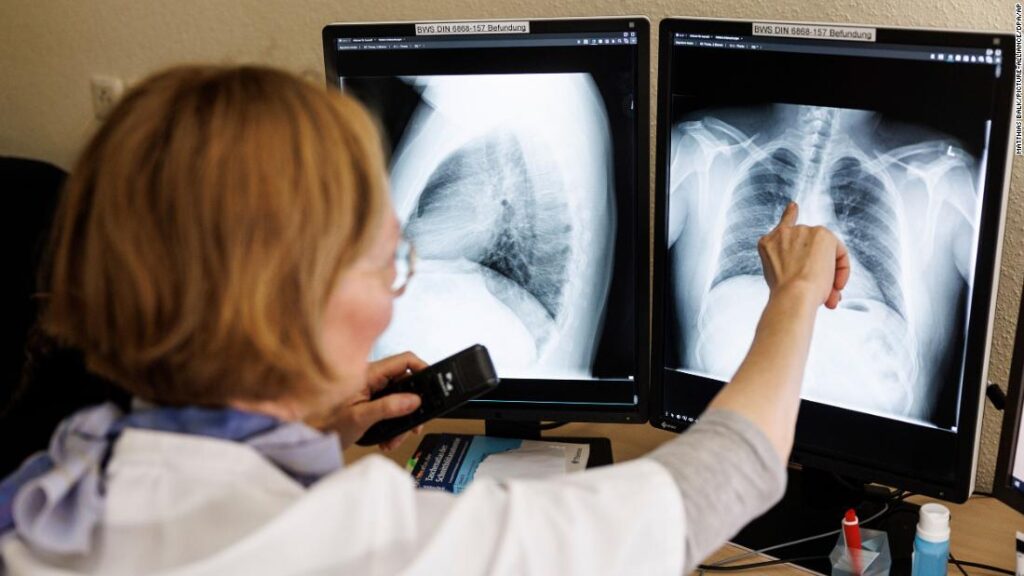 The study, published Thursday in the US Centers for Disease Control and Prevention’s Morbidity and Mortality Weekly Report, analyzed CDC data to quantify and characterize trends in tuberculosis cases.

Before the pandemic, case rates dropped an average of 1% to 2% yearly.

Tuberculosis cases increased for both US-born and non-US-born people between 2020 and 2021, the study says. About 71% of cases in 2021 were identified in people not born in the US, similar to years prior. Among the non-U.S.-born population, 9.1% were diagnosed within one year of immigrating to the US, compared with 9.7% in 2020 and 15.6% in previous years.

Many factors at play

The researchers offered several theories about the changes in tuberculosis trends over the past three years, many of them related to the Covid-19 pandemic.

They said it was possible that infection control efforts and travel restrictions led to a true reduction in tuberculosis cases since 2019. Disarray in the US health care system probably also meant missed or delayed diagnoses, in addition to potential misdiagnoses of tuberculosis as Covid-19 due to overlaps in respiratory symptoms.

Minnesota’s recent tuberculosis trends echo those of the country as a whole, and officials think the same factors may be at work.

“There is a true decrease in TB incidence due to Covid-19 mitigation and from changes in immigration patterns and travel to the US during the pandemic,” Gordon wrote in an email. “There is a decline from misdiagnosis or delayed diagnosis of TB due to providers not initially screening for TB or from patients less likely to seek medical care during the pandemic.”

Gordon said she does not expect 2022 case rates in Minnesota or the US in general to exceed those from 2019, but misdiagnosis or delayed diagnosis is “still a concern.”

“Our prediction would be a slow increase in cases over the next few years if the global pool of infection is higher, but we need to keep in mind that our case counts in MN differed in range over the years, from over 200 cases/year in the early 2000’s to our extreme low in 2020,” Gordon said.

According to the TB Elimination Alliance, the decrease in testing is in part a result of diverted labor efforts due to Covid-19.

“Throughout the Covid-19 pandemic, staff and resources have been diverted from the public health infrastructure to Covid-19 response efforts,” the group’s steering committee wrote in an email.

“For example, 30% of San Francisco’s Population Health Division staff were diverted to Covid-19 response,” they said, adding that the number of people who lost health insurance after losing their jobs could have also limited access to care.

Latent infections could be part of the increase

Tuberculosis is a bacterial infection, usually in the lungs, which can cause coughing, chest pain and fever.

The World Health Organization data says that of all infectious diseases, tuberculosis kills the most people each year. WHO estimates show that about a quarter of the global population is infected with TB, but only 5% to 15% of those infected will become sick.

Tuberculosis works in part through “latent infections,” which are distinct from active illness.

Those latent infections could be one reason for some of the increase seen in certain groups in the CDC study.

In the CDC data, the overall decrease in tuberculosis diagnoses in people moving to the US within one year of immigrating aligned with reductions in travel and immigration associated with the pandemic. However, cases among non-US-born people who have been in the country for more than 20 years increased in the past year.

“Even in the U.S. we saw delayed diagnosis of TB patients,” Gordon said. “This resulted in people being sicker and untreated longer, and therefore people who were infectious longer. This means there was a potential for more transmission and now there is a larger pool of people with latent TB.”

On World Tuberculosis Day, the worst death rate in years

March 24 is World Tuberculosis Day. This year, it comes as tuberculosis death rates are the worst in 10 years, WHO says.

“WHO has reported an increase in TB deaths for the first time in more than a decade,” Director-General Tedros Adhanom Ghebreyesus said Thursday.

The organization’s October 2021 Global Tuberculosis Report found that global tuberculosis deaths increased from 1.2 million in 2019 to 1.3 million in 2020. This is the first time these deaths have risen since 2005, bringing death rates back to the level last seen in 2017.

At the time of that report, the authors said that “the impact of the Covid-19 pandemic has reversed years of global progress in reducing the number of people who die from TB.” Today, according to WHO, there’s an additional concern for future spread.

Funding to battle tuberculosis “is especially critical in the context of the Covid-19 pandemic, coupled with conflicts across Europe, Africa and the Middle East, which are disrupting services for TB and putting an even heavier burden on those affected,” Tedros said.

“We are especially concerned for the health of people with TB in Afghanistan, Ethiopia, Syria, Ukraine and Yemen, where conflict is jeopardizing their access to services — and their very lives,” he said.

“Given that Ukraine has a high burden of drug-resistant TB, WHO is working closely with partners to support access to TB care services, including for refugees and displaced populations.”