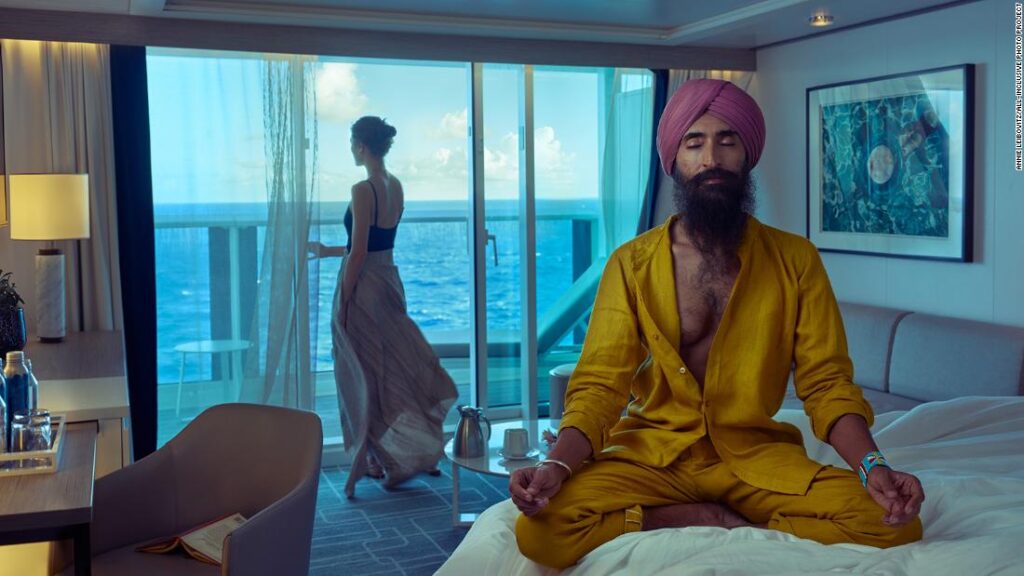 
(CNN) — Some of the world’s most innovative artists and photographers have teamed up with a cruise line in a bid to help change the face of travel marketing.

Celebrity Cruises has simultaneously launched a new campaign featuring images by the likes of Annie Leibovitz, and the world’s first free to use, “open source” travel image library, with the aim of changing the meaning of “all-inclusive” in the travel industry.

The work of Leibovitz, along with Black LGBTQ artist Naima Green, Jarrad Seng, an Australian photographer and filmmaker of Malaysian-Chinese descent, as well as photographer and triple amputee Giles Duley, is featured in the stunning collection, which is part of the “All-Inclusive Photo Project.”

Rachel Fleit, a writer, director and advocate of people living with alopecia, is featured in the All-Inclusive Photo Project (AIPP) campaign from Celebrity Cruises.

Among the standouts are a photograph of author and transgender activist Abby Chava Stein relaxing on board a cruise ship, an image of paralympic basketball player Amy Conroy playing volleyball on the beaches of Spain, and Sikh-American actor and designer Waris Ahluwalia meditating in a cruise ship stateroom.

Celebrity Cruises, owned by Royal Caribbean Group, says it will make many of the images available through its newly launched “diversity focused” travel image library.

“For far too long, ‘all-inclusive’ in the travel industry has meant everything on your vacation is included in one price. We set out to challenge this conventional thinking by imagining the phrase through the lens of others,” says Celebrity Cruises President and CEO Lisa Lutoff-Perlo.

“What Annie [Leibovitz] and all of the talented artists involved in this project have captured so beautifully, is that for vacations to really live up to the marketing moniker ‘all-inclusive,’ then they should start by using images that are inclusive of all, not just a few.”

Celebrity Cruises hope to “start a movement,” with the All-Inclusive Photo Project (AIPP) and is calling on travel companies to help to tackle the lack of diversity in travel marketing imagery.

“As global brands, we have a powerful platform to act as a catalyst of positive change. We know we have more work to do and we hope we inspire others to join us on this important journey,” adds Michael Scheiner, Chief Marketing Officer for Celebrity Cruises.

The AIPP comes as the US city of Boston, Massachusetts launches the second phase of its “All Inclusive Boston” campaign, which aims to showcase its diversity, as well as attract a wider range of visitors.
Meanwhile, in 2021, online travel company Orbitz’s launched the “Travel As You Are” campaign aimed at LGBTQ travelers, which encouraged travelers to “see the world on your terms.”