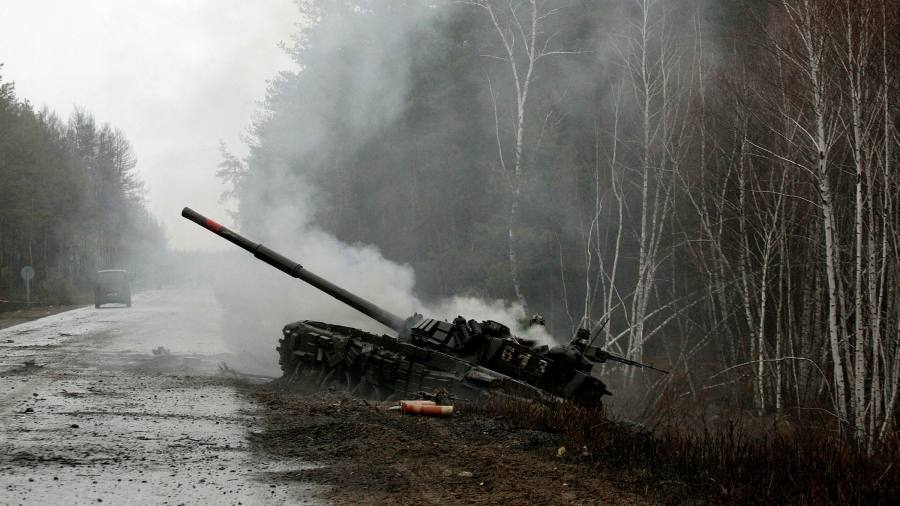 
Russian forces have entered Ukraine’s second-largest city hours after the west announced some of its most severe sanctions against Vladmir Putin’s regime for starting Europe’s biggest war in more than 50 years.

Ukrainian officials said government troops were fighting a Russian column early on Sunday that had broken into Kharkiv, marking the first time Moscow’s soldiers had entered the city since invading the country four days ago.

The advance into Kharkiv came after the US and western allies agreed to impose sanctions on the Russian central bank and remove some of the country’s lenders from the Swift global payments system, representing some of the toughest such measures ever taken against a G20 economy.

Oleg Synegubov, head of the Kharkiv regional administration, said in a Telegram post that Russian forces had entered the city centre. “The armed forces of Ukraine are eliminating the enemy,” he said. “Civilians are asked not to take to the streets.”

Video footage shared on social media showed Russian armoured vehicles moving slowly through residential areas of the city, which is 30km from Ukraine’s eastern border with Russia, and one light vehicle burning in the street.

Meanwhile, Russian forces continued to encounter strong resistance in the capital, Kyiv. Residents sought refuge in cellars, underground garages and metro stations as they braced for a full-scale assault.

Russia claimed it was making advances in southern Ukraine, north of the Crimean peninsula it annexed in 2014. The army said it had sealed off the cities of Kherson and Berdyansk, taken over the town of Genichesk and seized control of the Chornobayivka airfield, north-west of Crimea.

As the fighting continued, Russia said it had sent a delegation to Belarus and is prepared to start peace negotiations with Ukraine, although Kyiv disputed the sincerity of the move.

Dmitry Peskov, spokesperson for the Russian president, told RIA Novosti, a state-owned news agency, on Sunday that Moscow had dispatched officials from the Kremlin, the foreign ministry and the armed forces and wanted to hold talks in the Belarusian city of Gomel. “Now, Moscow is waiting for the Ukrainians,” he said.

Ukraine’s president Volodymyr Zelensky replied that Kyiv wanted peace but would not hold talks in Belarus because the Russian ally had served as a staging ground for the invasion.

“We want to meet, we want an end to the war. Warsaw, Bratislava, Budapest, Istanbul, Baku — we offered this to the Russian side,” Zelensky said. “And any other city suits us — in a country where missiles do not fly. That’s the only way to negotiate honestly and really end the war. ”

Mykhailo Podolyak, an adviser to Zelensky, described the Russian offer as a “primitive and predictable propagandistic story” played by “Peskov and the Russians”.

He said Ukraine would firmly reject the idea of talks while Russia was continuing to shell Ukrainian territory, saying they amounted to an “ultimatum”.

Podolyak said Ukraine’s position was “simple and transparent”, adding this meant “honest talks in an agreed location without any ultimatums”. He said once Russia took an “appropriate approach”, talks “can start immediately”. 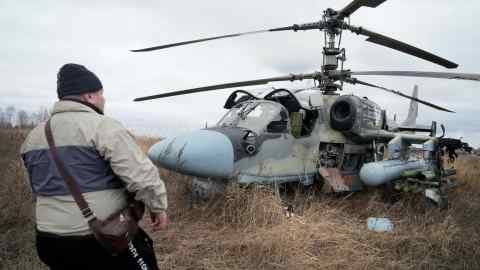 The diplomatic moves followed an announcement by the US and western allies that they would impose the toughest sanctions on Russia since the start of the conflict.

The US, UK, Canada, France, Germany, Italy and the European Commission said the measures would prevent Russia’s central bank from using its internal reserves to undermine broader sanctions.

The countries’ leaders added they would eject some Russian banks from Swift, ensuring they are “disconnected from the international financial system” and harming their ability to operate. The western allies also vowed to crack down on “golden passports” that let wealthy Russians buy citizenship, and to impose sanctions on officials and elites close to the government.

The sanctions have sowed fear in Moscow and other Russian cities. People stormed cash machines and bank branches in search of cash, both in roubles and US dollars for fear of a further collapse in value of the already sharply weaker national currency.

Russia’s central bank attempted to instil some calm to markets before they open on Monday. In a statement on Sunday it said it would continuously supply banks with rouble liquidity. “The Russian banking system is stable, and has sufficient capital reserves and liquidity to function without outages in any situation,” the bank said.