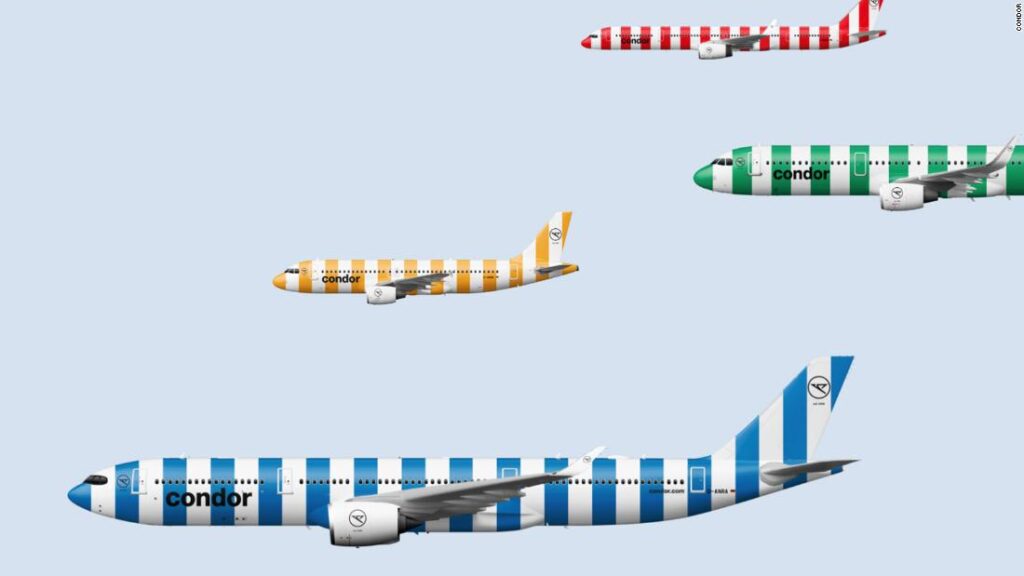 
(CNN) — Most airplane exteriors look more or less the same — white backdrop, bold lettering, company logo — but every now and again, an airline unveils a livery that stands out from the pack.

German airline Condor is the latest carrier to step up its livery game with a simple yet stylish paint job. Condor’s fleet will soon be tricked out in candy-colored bold stripes, inspired by “parasols, bath towels and beach chairs,” according to the airline.

Condor was owned by British holiday company Thomas Cook, which collapsed in 2019. Now the leisure airline is striking out on its own, with a new look to celebrate. The colorful stripes, designed by Berlin creative agency Vision Alphabet, aim to evoke nostalgia for vacations past and excitement for vacations of the future.

The airline suggests the stripes also represent “the diversity of Condor’s guests, employees and the multitude of opportunities to discover the world with Condor.”

Ralf Teckentrup, Condor’s CEO, said in a statement that the colorful stripes are the airline’s “new trademark.” Accordingly, it’s not just Condor’s exterior that’s been reimagined. Condor’s logo on its social media account is now emblazoned with stripes, while boarding passes and inflight items like blankets are being reimagined. Condor promises crew uniforms will also “shine in the new design,” with more details and photos to come.

The first stripy Condor aircraft has already taken flight — an A321 furnished in yellow stripes departed Frankfurt, Germany to Lanzarote, one of Spain’s Canary Islands, at noon on April 5.

Condor has over 50 aircraft in its fleet, and promises the majority will be painted by 2024. Expect to see six of the striped aircraft in operation by this summer, with these aircraft flying to destinations including the Canary Islands, Greece and Egypt.