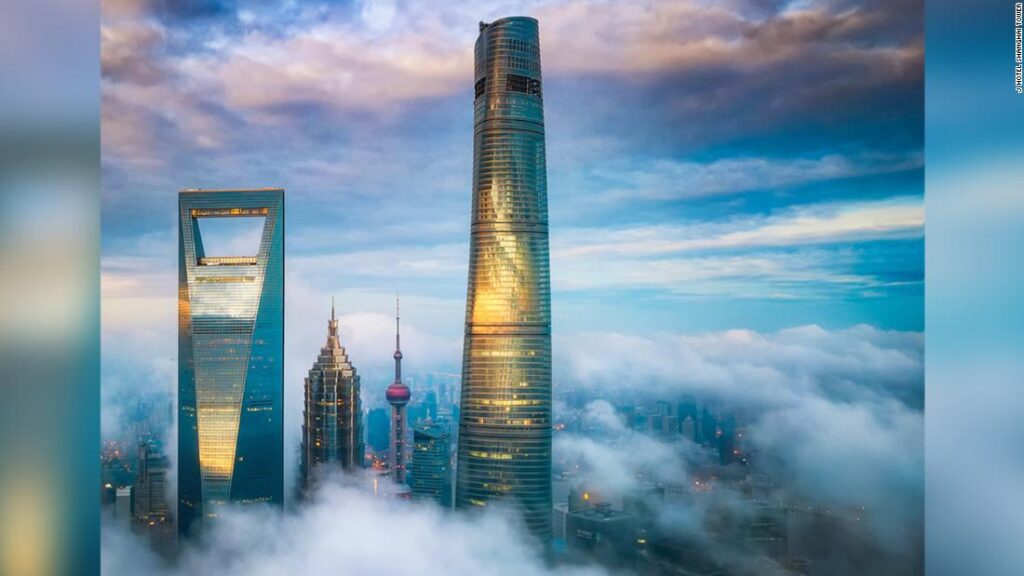 In February, officials from the Guinness World Records awarded the accolade to the Heavenly Jin restaurant inside the J Hotel Shanghai Tower in Shanghai, China.

Located on the 120th floor of Shanghai Tower, the restaurant sits 556.36 meters (1,825 feet) above ground. The J Hotel occupies the top floors of the Shanghai Tower — which at 632 meters (about 2,000 feet) is the tallest building in China and the third tallest in the world.

As one would expect from the world’s highest restaurant in a building, Heavenly Jin offers incredible views of the Shanghai skyline. The menu reportedly includes new takes on traditional classics that fuse elements of European, Japanese and Chinese cuisine.

As for the décor, guests entering are met with an intricate 30-meter-long mural inlaid with Italian mosaic tiles depicting a scene from the ancient Silk Road, while tables are set beneath a ribbon-like wave of crystal lights. It seats 256 diners and has five private dining rooms.

An open kitchen allows guests to witness the cooking process — if they can manage to take their eyes off the view outside the restaurant’s floor-to-ceiling windows.

Guests take in the panoramic views from the Heavenly Jin restaurant.

Heavenly Jin steals the “highest restaurant” crown from Dubai’s At.mosphere. Sitting at a height of 441.3 meters, it’s located on Level 122 of the world’s highest building — Burj Khalifa, and opened in 2011.

Why does Guinness need to include the words “in a building” in the title? Because mother nature has far loftier platforms to offer. The highest restaurant in the world is Chacaltaya, located at Bolivia’s Chacaltaya ski resort. According to Guinness, it sits at a height of 5,340 meters.

As for the J Hotel Shanghai Tower, it opened in mid-2021 and claims to be the world’s highest hotel in a building. Owned by Jin Jiang International, one of China’s largest state-owned hotel and tourism companies, it has 165 rooms including 34 suites and offers 24/7 personal butler service.

However, Guinness hasn’t recognized J Hotel’s “world’s highest” claim as it reportedly only considers buildings used wholly as hotels. (The J Hotel occupies an upper section of the Shanghai Tower, not the entire building.)

So where is the world’s highest hotel?

The 356-meter (1,168 feet) Gevora Hotel was officially recognized as the world’s tallest hotel by Guinness World Records in 2018. Featuring 528 rooms, this Dubai property famed for its striking golden exterior takes up 75 floors and opened in 2018.

New photos show what future of space tourism could look like

They met as teens at the Grand Canyon. 7 years later they reunited and fell in love

This company claims its boats can save Venice