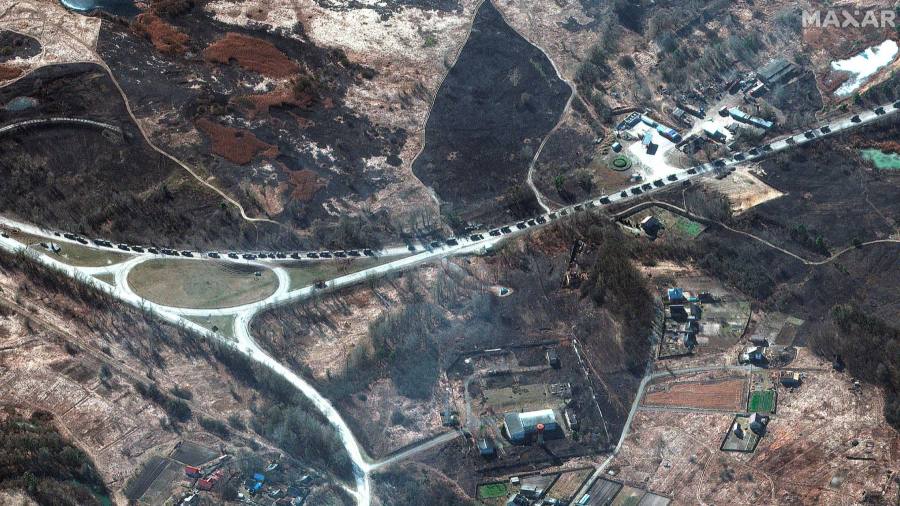 Good morning. This article is an on-site version of our FirstFT newsletter. Sign up to our Asia, Europe/Africa or Americas edition to get it sent straight to your inbox every weekday morning

Military experts said a missile strike on the centre of Kharkiv and satellite images of a huge convoy of Russian military vehicles heading towards Kyiv suggest a frustrated Moscow is shifting to a more destructive phase of its war on Ukraine.

A large explosion in the heart of Kharkiv, Ukraine’s second-largest city, earlier today destroyed the local government headquarters and filled an adjacent square with rubble. The Russian missile strike followed heavy bombing of residential parts of the city yesterday which left dozens dead, according to regional governor Oleh Sinegubov.

Meanwhile, satellite imagery showed a 64km long convoy of Russian trucks and military vehicles heading south to Kyiv and within 45km of the capital.

The advancement of Russia’s forces has been frustrated by Ukraine’s military and reservists since Putin ordered the invasion of his western neighbour last week, but military experts said the escalation of attacks over the past 24 hours suggest the bloodiest part of Moscow’s offensive is still to come.

According to western military intelligence sources, Russia has moved between 50 and 75 per cent of the combat forces it had positioned along the Ukraine border — about 150,000 troops — but much of them have yet to see action.

Follow the latest developments on our live blog, track the conflict in maps and sign up to receive my colleague Valentina Pop’s essential newsletter, Europe Express, for the latest analysis and reaction.

Five more stories in the news

1. Archegos and banks in settlement talks Archegos Capital Management and global banks are in negotiations to avoid a protracted courtroom battle that would expose details of the deals that led to the unravelling of the family office, according to three people familiar with the matter.

3. Toyota to shut down Japanese plants after cyber attack The world’s largest carmaker will close all of its plants across Japan and the factories of two subsidiaries, Hino and Daihatsu, after a suspected cyber attack on one of the carmaker’s largest parts suppliers.

5. Climate change risks greater than thought: IPCC report The world has a “brief and rapidly closing” window to adapt to climate change, with the risks associated with lower levels of warming greater than previously thought, according to a landmark UN report.

State of the Union President Joe Biden will call on America and the world to remain united in confronting Russia over its invasion of Ukraine, during his first State of the Union speech that will be heavily devoted to foreign policy as well as the high inflation undercutting the economic recovery.

US delegation sent to Taiwan A high level delegation will today arrive in Taiwan with a message of reassurance for Taipei from the White House and to remind China not to step up pressure on the island nation while Washington deals with the Ukraine crisis.

World leaders discuss Ukraine The International Energy Agency will hold an emergency meeting to discuss releasing oil from their strategic stocks after prices rose above $100 a barrel. Boris Johnson and UK government officials will travel to Estonia and Poland to discuss the Ukraine crisis with counterparts and Nato secretary-general Jens Stoltenberg. Separately, G7 finance ministers will meet to discuss the implementation of sanctions against Russia.

What else we’re reading

The best bet for the 2020s is short tech, long commodities Silicon Valley manias tend to lose steam when investors realise they have been pouring money into unprofitable ideas, writes Ruchir Sharma, chair of Rockefeller International. And historically, tech and commodities follow opposite cycles.

Hong Kong airport is falling off the radar The city has for many years claimed the title of the busiest airport in Asia but tough Covid restrictions are pushing airlines to reconsider the territory as a regional hub, writes Primrose Riordan.

Succession dramas add impetus to UAE’s draft family business law Private companies contribute an estimated $160bn, or 40 per cent, of the UAE’s economic output. But debilitating succession conflicts have led the government to step in and draft a new law that would improve governance and smooth succession.

Top tech for the trip to work — and back again Headed back to the office? Here are our top picks of gear worth splurging on to make your commute more enjoyable. From headphones to bicycles, mugs and more.

From New York to Berlin and beyond, here are FT writers’ picks of the best independent coffee shops in the world. What’s your favourite coffee shop in your city? Tell us at firstft@ft.com and we may feature your response.