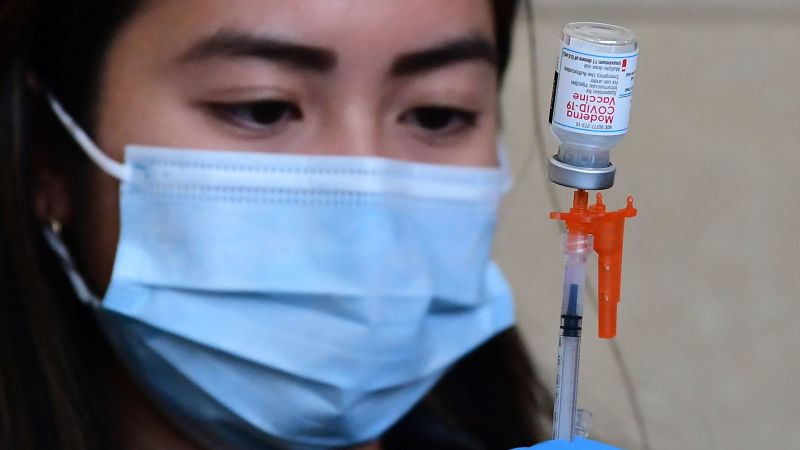 Vaccine advisers to the US Food and Drug Administration voted unanimously on Wednesday in favor of expanding the emergency use authorizations for the Moderna and Pfizer/BioNTech Covid-19 vaccines to include children as young as 6 months.

All 21 members of the FDA’s Vaccines and Related Biological Products Advisory Committee voted “yes” in response to the question: “Based on the totality of scientific evidence available, do the benefits of the Moderna COVID-19 Vaccine when administered as a 2-dose series (25 micrograms each dose) outweigh its risks for use in infants and children 6 months through 5 years of age?”

And all the committee members voted yes in response to the question: “Based on the totality of scientific evidence available, do the benefits of the Pfizer-BioNTech COVID-19 Vaccine when administered as a 3-dose series (3 micrograms each dose) outweigh its risks for use in infants and children 6 months through 4 years of age?”

The FDA, which typically follows the committee’s decisions, will now decide whether to authorize the vaccines for emergency use in the youngest children.

However, shots can’t be given until the US Centers for Disease Control and Prevention’s own vaccine advisers have voted on whether to recommend them and CDC Director Dr. Rochelle Walensky has signed off on the recommendation.

The CDC’s vaccine advisers are expected to vote Saturday. The White House has said shots could begin as early as next week.

Children younger than 5 are the only age group not currently eligible to be vaccinated against Covid-19. About 17 million kids will become eligible for Covid-19 vaccines once they’re authorized for this age group.

“To be able to vote for authorization of two vaccines that will protect children down to 6 months of age against this deadly disease is a very important thing,” said committee member Dr. Archana Chatterjee, dean of the Chicago Medical School at Rosalind Franklin University.

She compared the day to December 2020, when the first Covid-19 vaccines were authorized for adults and older teens.

“The benefits seem to clearly outweigh the risks, particularly for those with young children who may be in kindergarten or in collective child care,” committee member Oveta Fuller, an associate professor of microbiology and immunology at the University of Michigan Medical School, said of the Moderna vaccine.

Committee member Dr. Art Reingold added that even though the risk of Covid-19 hospitalization and death is lower for young children than for adults, children already get vaccinations to protect them against diseases for which their risk is low.

“If we have a vaccine with benefits that outweigh the risks, then making it available to people is a reasonable choice,” said Reingold, of the University of California, Berkeley.

“I would point out that we as a country continue to give a large number of vaccines to children where the risk of the child dying or being hospitalized of those diseases are pretty close to zero,” he said, such as polio and measles.

The number of Covid-19 hospitalizations and deaths in children is concerning and much higher when compared with influenza-related deaths and hospitalizations, FDA official Dr. Peter Marks said at Wednesday’s meeting.

Marks said the number of deaths for children 4 and under during the first two years of the pandemic “also compares quite terribly to what we’ve seen with influenza in the past.”

“We are dealing with an issue where I think we have to be careful that we don’t become numb to the number of pediatric deaths because of the overwhelming number of older deaths here. Every life is important,” he said, adding that “vaccine-preventable deaths are ones we would like to try to do something about.”

Marks said the Covid-19 vaccines are an intervention similar to the influenza vaccine, which has been broadly and routinely used and accepted to prevent deaths.

The Moderna vaccine is already authorized for adults. In a meeting Tuesday, the FDA’s advisers voted unanimously in favor of expanding the emergency use authorization to include older children and teens, ages 6 to 17, saying it would also offer more benefits than risks.

Moderna’s Covid-19 vaccine, when given as a 25-microgram dose, is “well-tolerated” in children ages 6 months to 5, said Dr. Rituparna Das, Moderna’s vice president of Covid-19 vaccines clinical development, during Wednesday’s meeting as she described the safety profile of the vaccine among this age group and adverse reactions.

These reactions were more common after the second dose of vaccine and resolved within two or three days, Das said, adding that fever was an important assessment of the vaccine’s safety for this age group.

Fever after any dose of vaccine happened in about a quarter of the children, but more often after the second dose, and one incident of febrile seizure was considered to be related to vaccination, Das told the committee members. The child who had the seizure remained in the vaccine study and got a second dose of vaccine with no serious events.

No deaths or cases of myocarditis or pericarditis were reported among vaccine recipients, Das said.

“In summary, mRNA-1273 was well tolerated,” she said, using the technical name of Moderna’s vaccine. “Local and systemic reactions were seen less frequently in these youngest groups.”

VRBPAC member Dr. Paul Offit said in Wednesday’s meeting that children who get the Pfizer/BioNTech vaccine will have to complete a three-dose series to get sufficient protection.

” ‘Do the benefits outweigh the risks’ is something I can support, but I do have some concerns about this vaccine,” said Offit, director of the Vaccine Education Center at Children’s Hospital of Pennsylvania.

Committee member Dr. Jeannette Lee of the University of Arkansas for Medical Sciences also mentioned concern that some children might not complete all three doses and that uptake of the vaccine will be slow.

“Three doses will certainly benefit. I have a lot of concern that many of these kids will not get a third dose,” she said. “My concern is that you have to get the three doses to really get what you need.”

Data from a phase 2/3 trial of the Pfizer vaccine included 1,678 children who had received a third dose during the period when the Omicron coronavirus variant dominated. The vaccine appeared to be safe and had a strong immune response. The data has not been peer-reviewed or published in a medical journal.

Antibody levels tested one month after the third dose showed that the vaccine produced a similar immune response as two doses in 16- to 25-year-olds, the companies said.

In FDA briefing documents, it was noted that among young children who had received the vaccine in trials, there were no cases of anaphylaxis, myocarditis or pericarditis, and the most common adverse reactions among children 6 months to 23 months were irritability, drowsiness, decreased appetite and tenderness at the injection site. For children 2 to 4 years old, the most common adverse reactions were fatigue and pain and redness at the injection site.

There is already slow uptake of Covid-19 vaccines among children in the United States.

“Having vaccine options for the youngest children is very important; however, we have seen a relatively low uptake of Covid vaccines in children in the 5- to 12-year-old group, and so my concern is that uptake in the youngest children under 5 years old might also be lower than we would like,” Dr. Dan Barouch, director of the Center for Virology and Vaccine Research at Beth Israel Deaconess Medical Center in Boston, told CNN on Wednesday.

Barouch, who is not a member of the FDA advisory committee, helped develop and study the Johnson & Johnson Covid-19 vaccine.

He said there were “striking” differences in how many adults are fully vaccinated compared with children and teens.

Children 5 to 11 were the most recent group to become eligible for vaccination, in November. But just 29% of these children are fully vaccinated with their two-dose primary series in the United States, according to the CDC, compared with about: