Why childhood crushes should be taken seriously 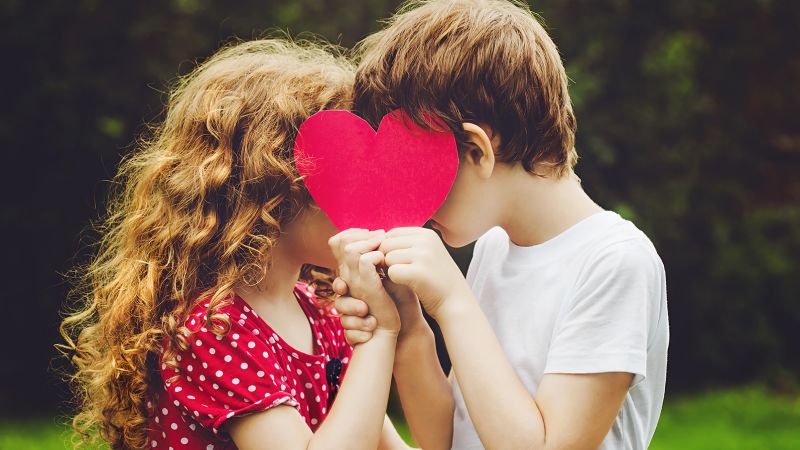 I recently asked my third grade son about crushes in his class. After two years of having limited interaction with human beings, I had to turn to him – the only person in our house who regularly socializes, albeit with his fellow 8- and 9-year-olds – for a gossip fix.

He told me about a few crushes, including his own, and he also made it clear that there were some he couldn’t tell me about because he had been sworn to secrecy. I respected his secrets and didn’t push any harder.

Despite the fact that he seemed happy and at ease throughout our conversation, I wondered if I was asking too many questions or failing to respect boundaries. Was I transgressing the sacred, private space of childhood crushes?

The experts say no – good news to all curious grown-ups out there. Crushes are important, long-ignored milestones in the relational life of preadolescent children that parents and caregivers should be respectfully discussing and unpacking with them.

These puppy love infatuations help children explore romantic feelings before they are ready for romantic relationships. Through them, they learn to cope with some of the more challenging parts of desiring another.

A crush is in its own category of relationships, separate from friendship or dating. Sometimes crushes are for people we know, and other times they are for fictional characters. Often, even if we know the object of our desire, the crush makes us idealize them, and it’s often the idealized version of that person we can’t get out of our head, rather than the living, breathing, flawed being.

The experience of having a crush can begin as early as preschool, and crushes can continue to occur throughout one’s life. Usually crushes are one-way, though sometimes they are reciprocated. In any form, crushes are common among prepubescent kids and satisfy important needs.

“These kids have emerging romantic ideas and emerging romantic feelings but are not actually ready to translate them into romantic behaviors or relationships,” said Julie Bowker, associate professor of psychology at the University at Buffalo in New York, adding that crushes generally aren’t sexual or about dating in elementary school.

Emerging, however, doesn’t mean lacking in power. The feelings are real, and kids can use their parents’ help in understanding them and learning what to do with them. It begins with parents taking these feelings seriously.

“There is a very strong emotional component there, and for some kids it is hard to know what to do with those strong emotions,” said Catherine Bagwell, professor of psychology at Oxford College of Emory University in Georgia.

Kids might talk about crushes all day with their friends and still barely understand them. Here is where parents come in, even if we never learn all the juicy details of who has a crush on whom. Parents are there to provide context and make sure kids know whatever they are feeling has likely been felt before, said Amy Lang, a parenting and sexuality educator and host of “Just Say This,” a podcast on healthy sexuality.

When talking about crushes with kids, ask them why they like whom they like, what kind of things they might like to do with their crushes and whether they might consider inviting them over. Also talk about what happens if both people don’t feel the same way.

How do we treat the person who “likes, likes” us, who we don’t “like, like” back? How do we handle it when the person we “like, like” doesn’t like us back? Even in the case of top-secret, unrequited love, this line of questioning can help them connect the dots between being thoughtful, respectful and curious and being in a romantic relationship with someone. “Establish the fact that friendship is part of romantic relationships,” Lang said.

Talking to kids about crushes helps normalize them, reducing the shame they might be feeling on the playground. In an attempt to normalize them, however, parents should be careful not to make crushes into something they are not.

“Sometimes adults like to quasi-sexualize the kids and say things like: ‘Oh, you are so cute! You are going to get married.’ In my universe, all that kind of language is not OK,” Lang said, explaining that such talk is not where children are developmentally and makes the relationships bigger than they are. Going there creates a set of expectations that kids can’t entirely understand or meet.

At the same time, parents should be careful not to play the crushes down.

If the mere mention of crushes renders your child silent, have the conversation anyway. Lang recommends asking broad questions about crushes at school, whether they are happening rather than who has a crush on whom. If that fails, parents can offer up their stories of having crushes as children, what they remember and how it felt.

“This tells your kiddo that you know about this, and it is OK to talk about it,” she said. It may feel awkward or like overstepping, but Lang said to move past that. “It is your job to help your kid have healthy relationships.”

Lang added, “My child to this day won’t tell me who he has a crush on, so I just talk about crushing in general and build on it. It is not their job to tell us anything or to ask questions. We have to tell them.”

One piece of information that I wish my parents told me when I had early crushes is that most crushes do not result in relationships. I wasn’t a romantic failure after all. Fewer than 20% of middle school children have reciprocal romantic relationships, Bowker said, and 20% of high school kids graduate without having a serious, lasting relationship. Elementary-age kids might benefit from knowing that most aren’t ready for a relationship until ages 10 to 14. Until then, and even after, there is nothing wrong or weird about having unreciprocated crushes.

While crushes are a bit obsessive by nature, they can go too far.

Help kids understand that some behaviors might make the object of their affections feel uneasy, Bowker suggested. There is a respectful way to admire another person, and a boundary-crossing one, and it’s important to explain the difference. “There were two boys at my daughter’s school who had a crush on her and were watching her all the time, and this made her uncomfortable,” she said.

If your child is in a similar situation, she recommended that parents talk to them about “consent, respect and boundaries.” Unwanted attention can easily cross lines, and children need their parents’ help in figuring out what those lines are and how to express them to others and advocate for themselves. She said parents should resist normalizing any behaviors just because they were common when they were kids – no more “boys will be boys” to hair pulling and other such expressions of affection – and listen to what feels right for their child.

As children get older, Bagwell said to keep an eye on whether their crush is keeping them from doing other things they should be doing. If that’s the case, the crush may have gone too far.

Crushes and parent-child conversations about crushes can be the building blocks of healthy romantic relationships going forward. Children have a chance to work through boundaries and rejection, hopefully developing empathy along the way.

“Looking at the big picture, these smell like relationships and have the components of relationships,” Lang said, giving the kids the building blocks of learning how to deal with, and talk about, relationships for the long run.

“Talk about something as normal and common as crushes, and you have made the space for so many more conversations that may be more important in the long run,” Lang said. These can include questions about gender, sexuality and sexual relationships.

As they learn how to connect romantically, I hope to learn a few things as well. I want to be able to make space for their vulnerability and feelings while respecting their privacy, to offer unsolicited advice that needs to be said even when met by silence, and to try to make sure through the rocky ups and downs of early love they know they are neither weird nor alone.