Who Is Afraid of the Big Bad Rate Pause? 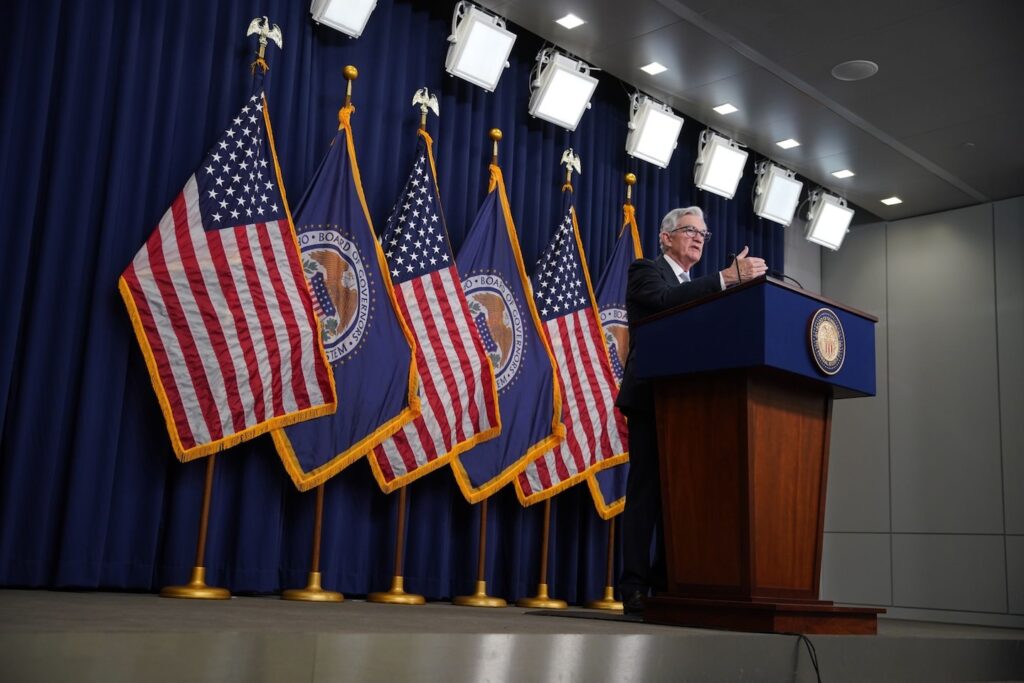 Who is afraid of the coming halt to interest-rate hikes? Far from breathing a sigh of relief, central bankers will struggle to convey that this is a good thing. They may almost not believe it themselves. As Bank Indonesia Governor Perry Warjiyo puts it, this is a time of sleepless nights.

Monetary chiefs will be at pains to stress the tussle against inflation isn’t over and there is more work to do — even as their next steps are likely to be smaller increases and then pauses. But the issue isn’t whether the battle is won; few people are ready to declare peace. It’s that the bulk of the work is now done. If only they could bring themselves to say so. Scarred by the way prices galloped away from them, policymakers will talk tough even when their actions suggest otherwise. The slowdown in growth matters, though officials will try to sound like it doesn’t.

Such messaging challenges are likely to be on display this week when South Korea sets borrowing costs. One of the first authorities to hike, in August 2021, the Bank of Korea is approaching a pivotal moment. Most analysts foresee a final quarter-point increase before officials catch their breath, while a significant minority pencil in an early pause. How to signal that such a surprise doesn’t presage cuts or the all-clear on prices? A “hawkish hold” is what Citigroup predicts, with a couple of dissents from folks who might prefer an extra 25 basis points of tightening this time.  To accomplish this, the commentary and press briefing by Governor Rhee Chang-yong will probably be cluttered with resistance to the very idea of a reduction and emphasize the possibility — albeit remote — of resuming increases down the road. A recalibration of this scope is largely a matter of timing rather than substance at the Federal Reserve. Bloomberg Economics sees two quarter-point hikes from the Fed, and then nothing for the rest of the year. Chair Jerome Powell is likely to accompany this shift with hard talk on inflation, just as he did when the Fed scaled down to a 50 basis-point move in December.

Communication will be a vital component of the economic story of 2023. At the panel in Bangkok last month where Perry riffed on insomnia, Reserve Bank of Australia Governor Philip Lowe lamented the end of a long chapter of relatively low and stable inflation. This more volatile era is bound to feature repeated failures to contain price pressures. The trick will be to resolutely bring it back to target over the medium term so consumers and businesses are confident that the next surge will be addressed as well, and the one after that. Enduring pain to achieve that result is one thing, how to relay the necessity of discomfort is another.Over the decade prior to the pandemic, officials became adept at advertising what they would do way in advance. Forward guidance came a cropper, however, in 2022. The tool may recover, but in a stripped-down form. The trouble is that modern communications — press conferences, dot plots, forecasts — are all byproducts of the greater transparency that is inherent in signaling the course of monetary policy. The shocks of the past 18 months don’t exactly encourage policymakers going out on a limb. European Central Bank President Christine Lagarde wrestled with this at the Bangkok seminar hosted by the Bank for International Settlements and the Bank of Thailand. She described a public-relations task from hell:

What I find particularly challenging with the kind of communication that we have to use, and which is one of the key tools that can be exploited, is that it leads you to being very schizophrenic. You address a particular audience, which is attentive to every single word, comma, inflection of voice, movement of your eyebrows, different calibration… And then you have the other audience that doesn’t understand anything that you have said to the first audience, and yet that second audience has to be convinced as well because inflation expectations, of course, are the product of all these wonderful forecaster surveys and professional da da da, but it’s also going to be the consumers’ expectations that will drive the show. It leads you to having to try to avoid inconsistencies between these two languages that don’t talk to each other and those categories of audiences that ignore each other.

That kind of tension is no doubt on Lowe’s mind as he wrestles with calls for more regular press conferences and braces for the findings of an independent panel reviewing the RBA on behalf of the government. Just about every other central bank of consequence runs the media gauntlet on a scheduled basis. What Lagarde didn’t say, but that hangs over messaging from the Fed, ECB and, to a lesser extent, Bank of England, is figuring out who to listen to. More words don’t always make the stance clear, but it can sure help if you can figure out who matters.

Today’s central bankers have certainly lived through periods of high inflation. It’s not so alien they have completely lost their bearings. They did, however, ascend to professional heights during too-low inflation. Can they make the leap while keeping the confidence not just of investors, but of the political class on whom their independence rests? I would give a few basis points to hear Rhee rehearse his remarks for Friday.

Daniel Moss is a Bloomberg Opinion columnist covering Asian economies. Previously, he was executive editor of Bloomberg News for economics.