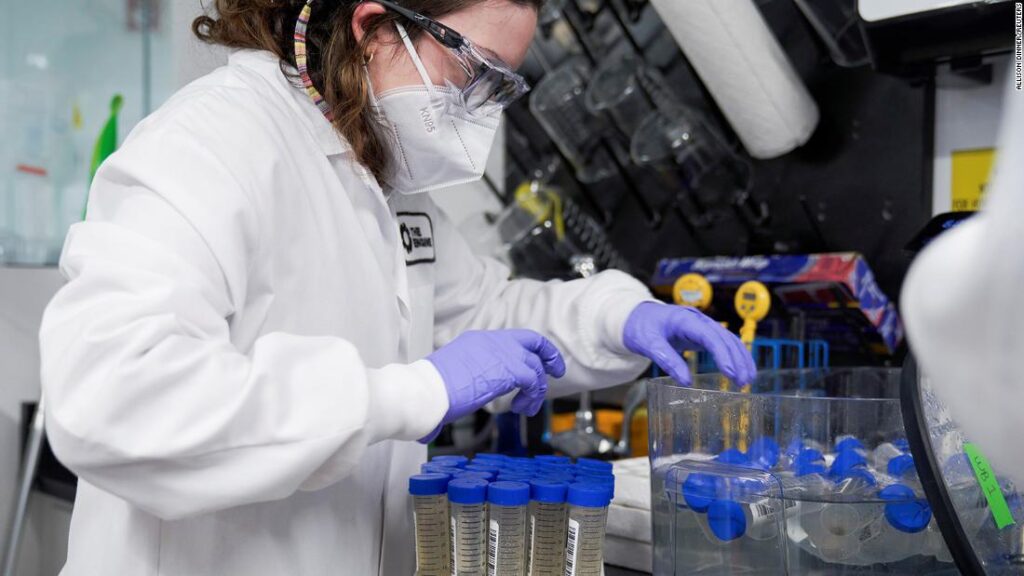 In September 2020, the US Centers for Disease Control and Prevention launched the National Wastewater Surveillance System, investing millions of dollars in an effort to coordinate and build upon programs that track coronavirus in samples collected in sewage systems.

Participation in the program has risen steadily since launch. But what’s driving interest now — and has led to the biggest bump yet — is the change in clinical testing strategies across the US, said Amy Kirby, a microbiologist who leads the CDC’s wastewater program.

With the growing prevalence of at-home Covid-19 tests and the public’s waning interest in testing in general, less case data is being officially reported. Local health departments are “recognizing that clinical surveillance isn’t going to have as much information about what’s going on in the community,” she said.

“Wastewater is a non-intrusive way to still have that early and reliable information of what’s going on in your community,” Kirby said.

The CDC launched a national public dashboard tracking Covid-19 wastewater data in February, and the number of participating sites has risen from about 400 to nearly 700 sites in the two months since.

In that same time, the daily average of reported Covid-19 tests dropped by two-thirds, according to data from the US Department of Health and Human Services.

The CDC’s wastewater program has enough money to sufficiently cover programs for all 50 states and 14 additional jurisdictions, with funding guaranteed through 2025.

There are 33 states currently funded through the agency’s epidemiology and laboratory capacity cooperative agreement — and another 14 that have a commercial testing contract — but the CDC hopes that all 50 states will be represented in the network by next year. Grant applications are now in process for 2023 funding.

Wastewater surveillance is not a new public health tool, but it was far from mainstream before Covid-19.

Local health departments are still figuring out how to best make use of this tool. They have questions about how to partner with utility companies to collect samples in the first place, as well as the best way to analyze and interpret the resulting data and more, said Deise Galan, lead analyst for the National Association of County and City Health Officials’ public health preparedness program.

Enough questions from members have poured in that NACCHO recently launched a mentorship program that has so far matched one local jurisdiction with lots of experience in wastewater surveillance to a couple of others that are just getting started.

About a dozen local health departments applied to be part of this mentorship program, and it has sparked the interest of many more that have reached out to learn more.

“It’s become something that has not only caught the desire of the local health officials, but also their elected officials as something that they can really implement and use not only for SARS-CoV-2, but for other pathogens as well,” Galan said.

Wastewater is a hyper-local surveillance tool, which only provides information about the specific community that is served by the participating wastewater treatment plant. But experts say there is clear value in bringing as many sites on board as possible.

“It’s both a strength that we get really good information about that community, but also a weakness because we need to get as many wastewater systems as we can doing this testing so that we get a more complete picture,” Kirby said.

It took the CDC about a year and a half — from the launch of the program in September 2020 until February 2022 — to work through how to best standardize and present the data they’d been collecting into a national dashboard.

Right now, data on the dashboard is limited. A map shows the relative change in coronavirus detection levels over a single 15-day period, with earlier trends in percent change only available through downloading a large data set.

But in the coming weeks, the CDC plans to update their national wastewater dashboard with more information about not just how levels change week-to-week, but how the absolute level of coronavirus detected in a sewershed compares to other points in the pandemic. They also plan to include an option to visualize trends over time for each site.

“Our focus is on using this system as an early warning of increases in the community. And we want that early warning system to be as early and as sensitive as it can be,” Kirby said.

This high-sensitivity can create “noise” in the system, she said. But with variants such as BA.2 picking in the US and others potentially looming over the horizon, they’d rather play it extra safe.

“We are working closely with our state and local public health officials to make sure that they are interpreting the data correctly to answer their questions. We’re monitoring those increases until we are either convinced they are just noise or see that they are real increases and we need to move on them.”

More participants bring more opportunities to share knowledge about a public health tool that many are just starting to become familiar with, too.

“Why are we going to reinvent the wheel, if there are other places that have been able to successfully implement this program?” Galan said. “At the local level, we can have that peer-to peer-sharing and collection of best practice.”

“Local health departments know who they see as peers. So, a rural county may look to Chicago for guidance, but not for similarities. But if they can compare themselves to another rural county, they might be able to find more and more programs like themselves,” she said.

“Those are the places where having everything compiled in a CDC location allows us to explore the possibility for expanding partnership outside of just one state with the similarities around county size and jurisdiction size and population type and infrastructure set-up.”