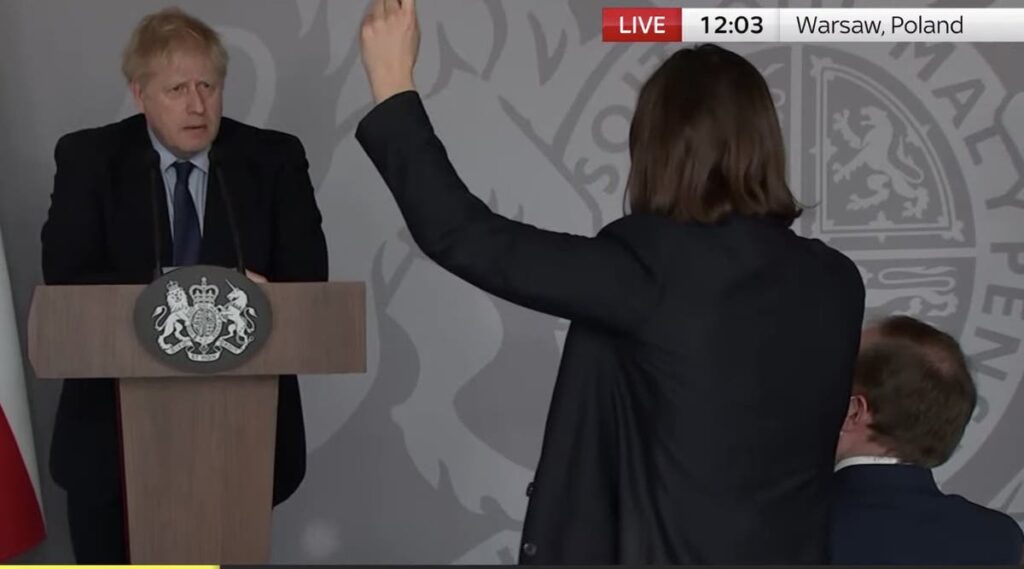 
Boris Johnson was berated by a Ukrainian woman who urged the UK to do more amid the ongoing Russian invasion in an emotional speech.

She accused Nato of being too afraid of World War 3 to act but argued ‘it had already started’ with Putin invading her country.

Ms Kaleniuk, the executive director of the Anti-Corruption Action Centre civil society organisation, told Mr Johnson in Warsaw she is from Kyiv but passed through the border in recent days.

Follow the latest from Ukraine in our live blog

“Ukrainian women and Ukrainian children are in deep fear because of bombs and missiles which are going from the sky. Ukrainian people are desperately asking for the rights to protect our sky, we are asking for a no-fly zone,” she said.

“What’s the alternative for the no-fly zone?

“Nato is not willing to defend because Nato is afraid of World War Three but it’s already started and it’s Ukrainian children who are there taking the hit.

Responding to the impassioned question, Mr Johnson said: “I’m acutely conscious that there is not enough that we can do, as the UK Government, to help in the way that you want and I’ve got to be honest about that.

“When you talk about the no-fly zone, as I said to (Ukrainian President) Volodymyr Zelensky a couple of times, unfortunately the implication of that is the UK would be engaged in shooting down Russian planes, it would be engaged in direct combat with Russia.

“That’s not something that we can do or that we’ve envisaged. The consequences of that would be truly very, very difficult to control.”

It comes as Nato chief Jens Stoltenberg said the alliance would not send troops or combat jets to support Kyiv as it does not want to become part of the conflict.

Mr Stoltenberg urged Russia to end the war in Ukraine and withdraw all forces.

In his speech in Warsaw, Boris Johnson said Vladimir Putin had made a “colossal mistake” by invading Ukraine.

“My call to the West is protect our sky. It is insane that our sky is being protected by children who are taking the heat,” she said.

She said Ukrainians were “taking guns with zero protection” to “fight the evil” of Russian troops.

Speaking after she made her emotional plea to Boris Johnson to enforce a no-fly zone, Daria Kaleniuk told reporters: “My message is that the suffering of people in Ukraine is unbelievable now.”