The restaurant where real Italian mothers rule the kitchen 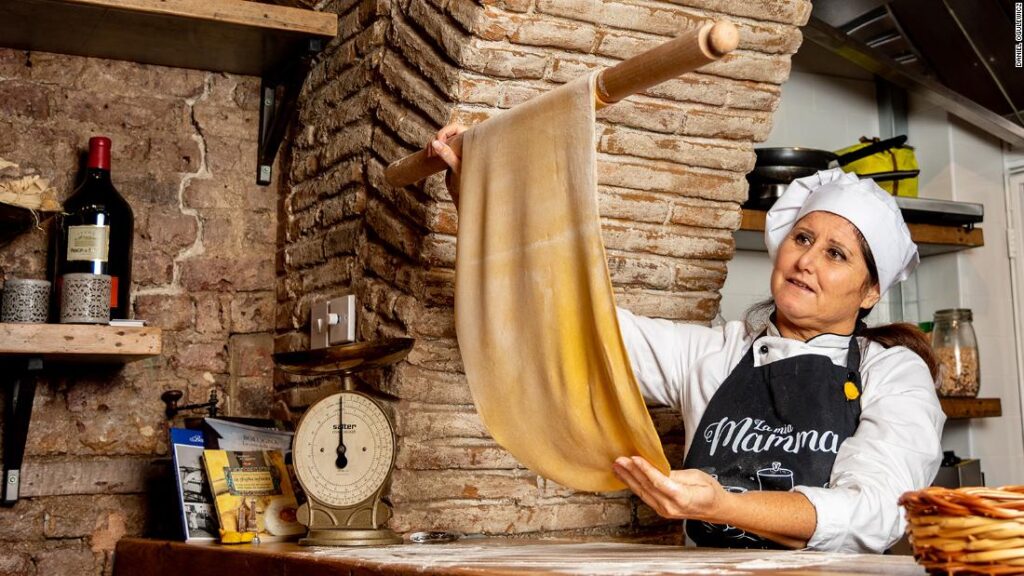 Editor’s Note — Forget what you think you know about British food. This Sunday at 9 p.m. ET “Searching for Italy,” Stanley Tucci explores how Italian immigration has transformed the food scene in his adopted hometown of London.

Born in Sicily, he moved to London when he was 16, and soon started yearning for his home flavors and traditions — especially the bustling Sunday lunch, when mothers and grandmothers cooked timeless favorites for an open-air, marathon feast that could easily spill into the evening hours.

After he built up a career in the restaurant business, Corsaro was enjoying a night out with friends when one jokingly suggested that he should bring over his mother to cook.

He took it seriously.

That’s how La Mia Mamma began. The eatery launched as a pop-up in 2018, before growing to today’s pair of restaurants and a deli.

The premise is simple: real Italian mothers and grandmothers are recruited from one of Italy’s 20 regions.

They then move to London for a three-month residency, showcasing their own traditional recipes based around their local cuisine, before handing over the chef’s hat to a new brigade of mammas from a different region.

It’s an interesting set up, because food in Italy varies wildly depending on geography.

While many of the foods that are typically associated with Italian cuisine — lasagne, tortellini, prosciutto crudo, ragù, parmigiana — all come from the same region, Emilia Romagna, there’s an abundance of variety and hidden gems to discover elsewhere, often in places that would be off the beaten path for most tourists.

At the time of writing, La Mia Mamma is focusing on Campania and Lazio, two adjacent regions on the southwest of Italy, host to Naples and Rome respectively.

A selection of dishes from Abruzzo, a relatively underrepresented cuisine from a south-eastern region on the Adriatic coast.

Lazio’s cuisine has surged to the spotlight in recent years, with such classics as carbonara, amatriciana and cacio e pepe, a deceptively simple pasta dish, made of just four ingredients, that is actually one of the hardest to make due to its delicate process.

But the region’s “cucina popolare,” or comfort food, also includes lesser-known delicacies such as coda alla vaccinara, an oxtail stew that isn’t easy to find outside of Lazio itself.

Each restaurant has three mammas, who are first screened in Italy through social media.

“We’re not looking for professional chefs, but housewives who cook for their families,” says Corsaro, adding that the selected candidates are then flown to London for a trial, after which they are given accommodation, a transportation card and a salary, comparable to that of a sous chef.

Most of the mammas, who are usually in their sixties and often retired, have never lived abroad before.

They all bring their own recipes, and work to ensure that they are executed to perfection, with the help of experienced kitchen staff.

A view of one of the restaurants. Both are located in Chelsea, London.

Their presence is not limited to the menu; the kitchens are visible from the street, so passersby can catch a glimpse of the mammas at work, and they’re happy to mingle with patrons.

“You see them everywhere. They’re always around, making people try whatever they’ve been cooking. They will even dance with the guests,” says Corsaro.

The venues are all located in the London Borough of Kensington and Chelsea, where Italians are one of the largest foreign resident groups and contributed the largest number of new residents in the years right before the Brexit referendum in 2016.

So far, no mamma has ever been rejected after the trial, and they’ve all adapted nicely to London city life, albeit with some adjustments.

Corsaro with his mother Anna Famà, left, the original ‘mamma,’ and Mamma Sara.

“They always tell me the city is too big, they’re not used to being on the road for an hour to get somewhere, so we have to find them lodgings close to the restaurants,” says Anna Famà, Corsaro’s mother, and the original mamma.

After her stint, she decided to stay, and now acts as an ambassador for incoming mammas, helping them to settle in.

“It never happened that a mamma left happy to leave, and those who have gone often ask me when they can come back,” says Famà, adding that although cooking for 200 people can get hectic, there is always a relaxed atmosphere in the kitchen.

“If something goes wrong, we can always fix it,” she says. “For me, this is not a job, it’s my home. I hope I’m transmitting that to the mammas.”

Sign up for the Unlocking Italy newsletter, a eight-part newsletter series (with a bonus finale) adds a slice of dolce vita to your weekends.

Share. Facebook Twitter Pinterest LinkedIn Tumblr WhatsApp Email
Previous ArticleDesperate families turn to hospitals when their hunt for formula comes up dry
Next Article Aldi: Clever checkout hack to slow down cashiers scanning items and ‘pack at the till’