Singaporean Pride In The Metaverse’s Race: Affyn Leads The Play-to-Earn Space with Local Talents. Raises $6 million USD in private round 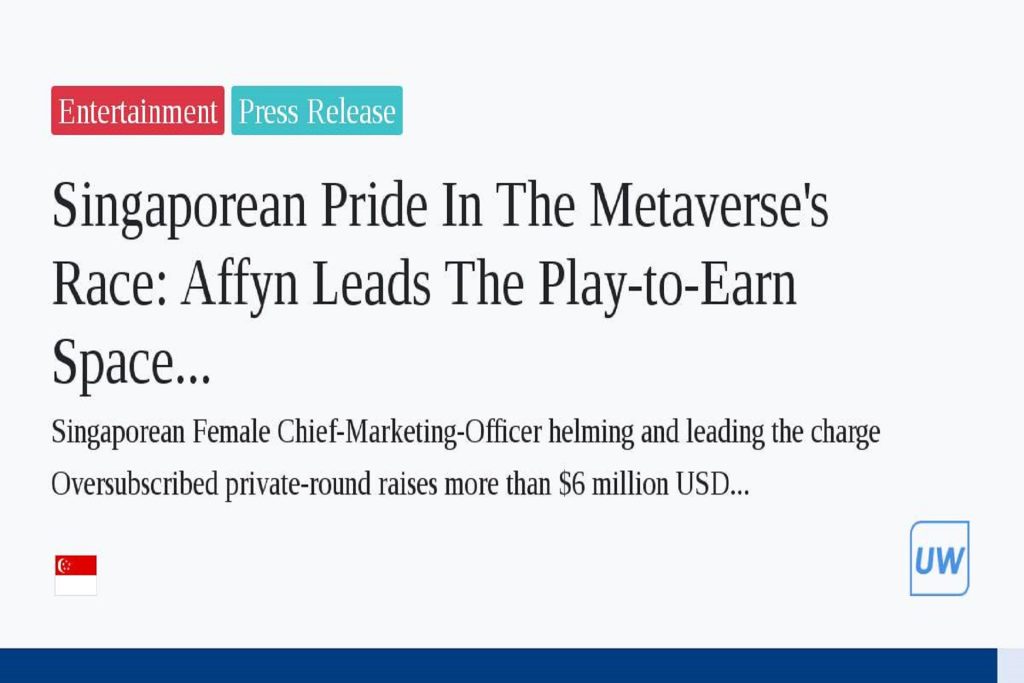 Affyn, a metaverse-based project, it is a free-to-play and play-to-earn mobile game with geolocation capability and augmented reality (AR) integrated, just raised 6 million USD from the completion of their private round.

Affyn installed a female leader to spearhead their marketing sector. Ms Christina Yip has acquired more than half a decade of experience in the blockchain and cryptocurrency space having worked with most of the prominent blockchain players in the industry. To date, her drive and connection contributed to Affyn’s oversubscribed private rounds, raising over USD 6 million in, just within a week after the project was unveiled.

Lucaz Lee, Founder and Chief Executive Officer, who also fronts the fundraising, strongly believes that the calibre of Christina’s ability heavily contributed to their strong progress. Stating further that “We are expecting to be profitable in the very early stages of this project.

We need more projects in Asia which leads the metaverse space and Affyn will be one of those names that reveals how a powerful ecosystem can bring about gamers and non-gamers together. I look forward to accelerating Affyn, where we showcase our virtual dream to the real world.

As a metaverse-based project with geolocation capability and augmented reality (AR) mechanics, Affyn incorporates the fun concept where every in-game character, which they call “Buddy”, is a non-fungible token (NFT). This disrupts the traditional gaming industry where players grind thousands of hours for in-game items and currencies which they do not really own.

Affyn’s currency is also known as FYN tokens. The utility of FYN is impressive – apart from the usual in-game transactions, it has real world utility – a close-looped economy is formed. In summary, Affyn allows its users to play and utilise their tokens to real-world value.

In 2022, Affyn’s roadmap and strategy will see it grow exponentially as it seeks to aggressively expand its marketing outreach in the gaming and metaverse realm. They are expected to hit triple digit percentage growth in terms of users over the next 2 to 3 years as the space continues to evolve.

To find out more about Affyn and details of their public sale, visit: