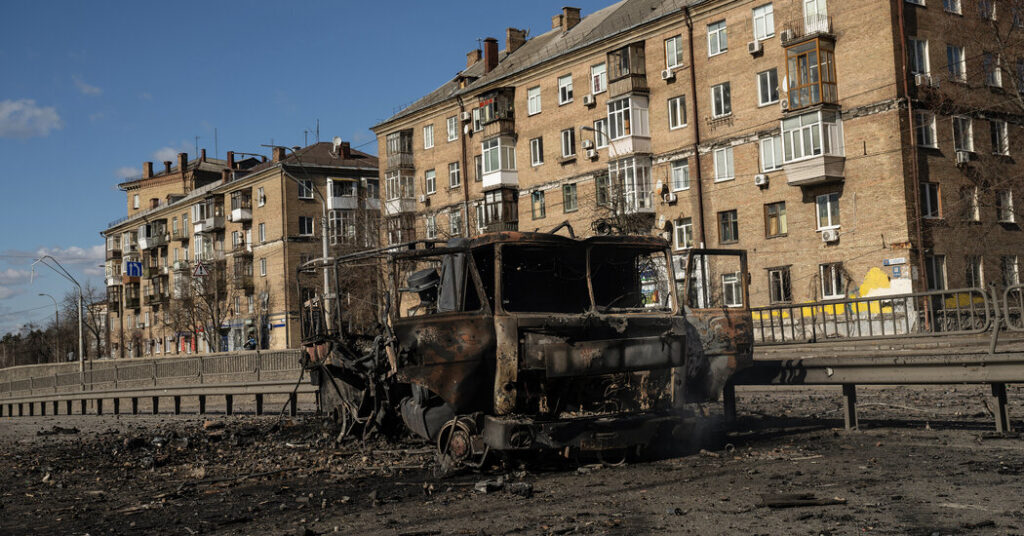 WASHINGTON — The Biden administration and key allies announced on Saturday that they would remove some Russian banks from the SWIFT financial messaging system, essentially barring them from international transactions. They also said they would impose new restrictions on Russia’s central bank to prevent it from using its large international reserves to undermine sanctions.

The actions, agreed to by the European Commission, Britain, Canada, France, Germany, Italy, and the United States, represented a significant escalation in the effort to impose severe economic costs on Russia over President Vladimir V. Putin’s decision to invade Ukraine.

“Russia’s war represents an assault on fundamental international rules and norms that have prevailed since the Second World War, which we are committed to defending,” the countries said in a joint statement. “We will hold Russia to account and collectively ensure that this war is a strategic failure for Putin.”

The announcement was a remarkable change of direction for European powers that, until recent days, were reluctant to end a 30-year effort to integrate Russia into the European economy. Now, like the Biden administration, European nations appear to be headed toward a policy of containment.

But, out of a sense of political self-preservation, they stopped short of barring energy transactions with Russia. The result is that Germany, Italy, and other European nations will continue purchasing and paying for natural gas that flows through pipelines from Russia — through Ukrainian territory that is suddenly a war zone.

Some in Europe, along with President Volodymyr Zelensky of Ukraine, had called for all Russian institutions and individuals to be cut off from SWIFT in an effort to bring the Russian economy to its knees. About 40 percent of the Russian government’s budget comes from energy sales.

While the announcement on Saturday was limited in its scope, Ursula von der Leyen, the president of the European Commission, said that “cutting banks off will stop them from conducting most of their financial transactions worldwide and effectively block Russian exports and imports.”

Ms. von der Leyen said the trans-Atlantic coalition would also try to cripple Russia’s central bank by freezing its transactions and making it “impossible for the central bank to liquidate assets.”

The targeting of the central bank could, in the end, prove more consequential than the action regarding SWIFT. Russia has spent the last several years bolstering its defenses against sanctions, amassing more than $630 billion in foreign currency reserves by diverting its oil and gas revenue. Those reserves can be used to prop up the ruble, whose value has fallen dramatically amid the latest rounds of sanctions.

Biden administration officials said on Saturday that there would be new restrictions by the United States and its allies against selling rubles to Russia, undercutting the country’s ability to support its currency in the face of new sanctions on its financial sector. That, in turn, could cause inflation — and while administration officials did not say so explicitly, they are clearly hoping that could fuel protests against Mr. Putin’s rule in Russia.

“We know that Russia has been taking steps since 2014 to sanctions-proof its economy, in part through the stockpiling of foreign exchange reserves,” said Emily Kilcrease, a senior fellow at the Center for a New American Security. “The central bank sanctions will limit their ability to leverage this asset, along with constraining their ability to conduct monetary policy of any sort to manage the economic damage from other sanctions.”

The United States and its allies also announced steps to put pressure on Russia’s elites, including creating a task force that the White House said would “identify, hunt down and freeze the assets of sanctioned Russian companies and oligarchs — their yachts, their mansions and any other ill-gotten gains that we can find and freeze under the law.”

The idea is to strike those who are closest to Mr. Putin and undermine their ability to live in both Russia and the West. In another new move, the United States and its allies said they would seek to limit the sale of so-called golden passports that allow wealthy Russians who are connected to the Russian government to become citizens of Western nations and gain access to their financial systems.

While the steps are some of the harshest taken yet, the announcement falls short of a blanket cutoff of Russia from SWIFT, which some officials see as a nuclear option of sorts. Such a move would have essentially severed Russia from much of the global financial system.

And some experts say that it may only drive Russia to expand the alternative to the SWIFT system that it created several years ago when it began trying to “sanction-proof” its economy. But Russia’s equivalent system is primarily domestic; making it a competitor to SWIFT, officials say, would require teaming up with China.

The moves on Saturday came on the same day that Germany’s chancellor, Olaf Scholz, announced that his government was approving a transfer of antitank weapons to the Ukrainian military, ending his insistence on providing only nonlethal aid, such as helmets.

At the same time, in a post on Twitter, Germany’s foreign minister, Annalena Baerbock, and its economy minister, Robert Habeck, acknowledged that the country was moving from opposing a SWIFT ban to favoring a narrowly targeted one.

“We are working intensively on how to limit the collateral damage of a disconnection from #SWIFT so that it hits the right people,” they said. “What we need is a targeted and functional restriction of SWIFT.”

The announcement by the United States and its allies did not specify which banks would be cut off from the system.

For weeks, the Biden administration publicly played down the notion of cutting Russia off from the system, suggesting that while all options were on the table, such a move could create more problems than it would solve.

But behind the scenes, American officials were pressing European allies to give some kind of indication to Mr. Putin that Europe was moving toward greater economic isolation of his country.

Moreover, because SWIFT is a European organization, the United States has been allowing European countries to take the lead on the issue. The only unilateral lever that the United States could use would be to impose sanctions or threaten them, on the SWIFT organization itself if it continued to transmit messages for Russian institutions.

Some experts on sanctions have argued that barring Russian financial institutions from SWIFT is overblown as a tool for punishing Russia, saying that strict sanctions on the country’s banks will have the same effect.

But others have argued that blocking Russian institutions from the system would deal a blow to the country’s financial sector and that barring only a handful of banks does not go far enough.

“A targeted cutoff would not achieve what is needed,” said Marshall S. Billingslea, who was the assistant Treasury secretary for terrorist financing in the Trump administration. “They’ll simply reorganize the banking sector to put somebody else forward. The much more straightforward approach is to simply detach SWIFT from all of the Russian financial institutions.”

‘It’s stomach-turning’: the children caught up in Ukraine war | Ukraine