Rethinking the shame and blame game 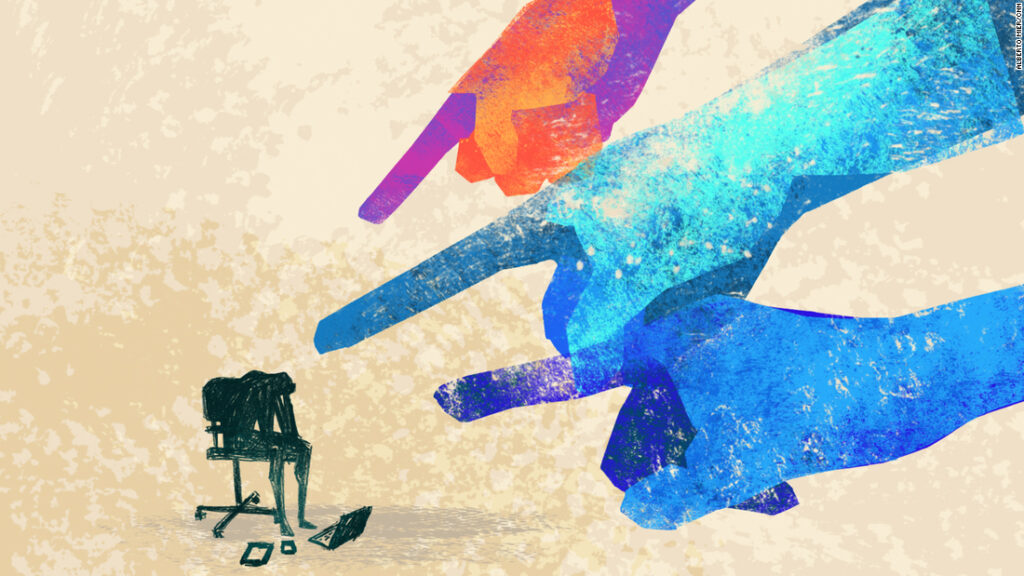 Instead of reinforcing fairness and justice to reengage people with their communities, shame “has been weaponized by corporations to profit and by institutions to maintain power.” Usually, she said, “that’s being done in a bullying, punching down shame kind of way.”

By recognizing and confronting the “shame machine” wherever it operates, O’Neil said she hopes we can unite to “punch up” at the real sources of the problem.

This conversation has been edited and condensed for clarity.

CNN: What is shame?

Cathy O’Neil: Shame is a policing tool used to reinforce rules and taboos as way to promote a society’s survival. When an individual’s desires conflict with group expectations, shame can rein in behavior.

But it can be painful, and the damage can run deep, making us feel worthless and stripping us of our humanity. Shame packs a vicious punch.

CNN: Does shame have any positive function in societies?

O’Neil: Shame is a social mechanism. When it works, it looks a bit like persuasion with a soft hint of the potential for being outcast if you don’t follow the rules. The idea is to discourage selfish action in favor of what the community needs.

For example, the Hopi Pueblo clown festival includes pulling rule-breaking villagers into the middle of the ceremony to shame them. Public humiliation calls them out for misdeeds in front of the entire village.

But no one is arrested, physically punished or outcast forever. Instead, the festival focuses on helping individuals to become “more Hopi” by convincing them to stop making choices that are bad for the community. A distinctive feature here is that the target of the shame has the choice to conform.

CNN: You write that giant sectors of today’s economy are organized and optimized to foster shame that’s bullying. How so?

O’Neil: The shame-industrial complex has an old-school traditional part and a newfangled “big data” part. There’s a long tradition of companies working to make you feel ashamed of something in order to sell you a product to try to make you feel better. Often, the product fails or even worsens the problem.

One horrifying example is a company’s recent campaign to make teenage girls feel like their vaginas smell disgusting so they can sell them a deodorant. First of all, there’s nothing wrong with the way our bodies smell naturally. Secondly, those types of products can actually cause problems like yeast infections.

Particularly insidious is the use of “concern trolling” by a profit-driven business that claims no one should have to feel ashamed about their body while actually manufacturing the shame they pretend to condemn.

The newer incarnations of the shame-industrial complex are the big tech companies and social media platforms that set up the perfect environment for us to shame each other.

The algorithms are optimized to pit us against others and drag each other down. When we shame each other and ourselves, we are actually working for their profit.

CNN: What do you mean by shame that “punches down”?

O’Neil: Shaming someone for anything beyond their control constitutes punching down or bullying. This often involves outsiders exaggerating the shamed individual’s power to “correct” some condition or behavior, acting as if making an easy choice would solve the problem even when the choice is not at all easy — like shaming somebody for opioid addiction, for example.

Or, from my personal history, being fat-shamed by my parents and society as if dieting to lose weight was actually a simple, successful remedy. The weight-loss industry profits off that assumption despite the reality that dieting essentially doesn’t work.

One takeaway message I want to impart is: Don’t shame people for what they can’t choose. And remember, it’s easy to overestimate someone else’s choice.

Instead, let’s turn downward punches into upward ones.

O’Neil: Punching up involves shaming people in power — those who have a voice and a platform to defend and/or redeem themselves — for making choices that harm others. It can encourage outliers to refocus on the common good.

A war on shame machines would entail scrutinizing public services like welfare offices, work requirements and all of those grueling bureaucratic nightmares that poor people have to go through to access basic services.

Not long after (former White House press secretary) Sarah Huckabee Sanders was refused service at the Red Hen restaurant, I talked to the proprietor. She stood by her decision.
People likened the situation to Black people being refused service in the South during the Jim Crow era. No way. Sanders had a choice about her work for the Trump administration, and as spokesperson for the White House, she had the very definition of a voice.

CNN: How can our awareness of shame help?

O’Neil: I have a fantasy for people carrying unreasonable burdens of student debt. Instead of feeling ashamed, which is a typical reaction that we, as a society, expect and provoke, what if they worked in solidarity toward debt forgiveness? Recognizing the shame machine would allow us to make progress toward eradicating policies that shame poor people.

CNN: You recommend noticing shame and labeling it wherever you see it. What specific actions do you call for?

O’Neil: When you look at the world through a lens of shame, you can see when it’s being weaponized, whether it’s body shaming to sell a product or shaming victims of abuse to silence them. Then, if it’s punching down, you can disrupt it.

To create healthier relationships, we need to call out shaming interactions. Maybe it involves an immigration officer demeaning a refugee or a mother fat-shaming her 12-year-old. Disruption could require you to actually get in between two people to say, “What’s happening here? Why are you shaming that person?”

I’m also asking people to get past denial or feeling ashamed of themselves to reach a point of recognizing times when society offers a raw deal.

So often our systems place blame on the victims. Not wanting to change, the status quo reinforces the idea that individuals are at fault. If people could see this and act collectively, the punching up would be magnificent to watch.

CNN: If shame isn’t a habit we can “kick in a day or even a decade,” as you write, how can we overcome its painful effects?

O’Neil: Shame is like a bruise that doesn’t ever heal completely. I wrote about a time when I had stopped dieting and thought I was way past identifying myself through just my fatness. I had three children, a successful marriage, a successful career and a PhD. But a rude comment from a clerk brought back all my shame over being fat. In that moment, I was completely subject to the humiliation.

I don’t think chronic shame ever goes away. There are no 10 easy tricks to get rid of shame. There just aren’t. But reckoning through it is still worth doing, if only to help us to avoid passing it on to our kids or other people.

CNN: Does shame offer any benefits?

O’Neil: Shame reminds people of the rules and the ultimate risks in ignoring them. Being expelled from the community could mean possibly dying of exposure. So, it makes sense that we experience shame as an existential threat.

Think of how people respond in a crisis. Hoarding food at a time of scarcity is a natural impulse, but it is also not good for the community as a whole. In Ukraine right now, people are sharing the little food and water that they have with each other.

I saw the same thing after Hurricane Sandy in New York City. People are so utterly generous in times of crisis. And when someone isn’t behaving with a generous spirit, shame can be very useful.

Jessica DuLong is a Brooklyn, New York-based journalist, book collaborator, writing coach and the author of “Saved at the Seawall: Stories From the September 11 Boat Lift” and “My River Chronicles: Rediscovering the Work That Built America.”

The search for longer-lasting Covid-19 vaccines

CNN  —  More cases of a rare disease have been reported worldwide, including in the…

May 25, 2022
We use cookies on our website to give you the most relevant experience by remembering your preferences and repeat visits. By clicking “Accept All”, you consent to the use of ALL the cookies. However, you may visit "Cookie Settings" to provide a controlled consent.
Cookie SettingsAccept All
Manage consent