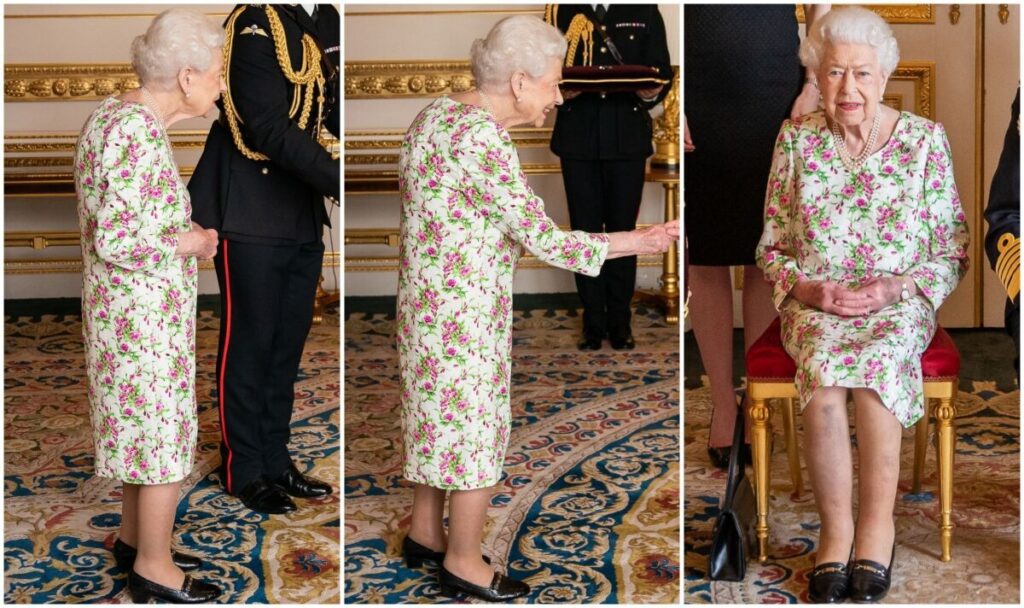 Queen Elizabeth, 96, made a surprise appearance on Tuesday at her home in Windsor Castle. The Queen was presenting the George Cross to Ms Amanda Pritchard, the Chief Executive of NHS England. Her Majesty also presented the George Cross to Ms May Parsons, the Modern Matron at University Hospital Coventry and Warwickshire.

Both these women are representatives of the National Health Service.

The ceremony took place on Tuesday during an Audience at Windsor Castle.

For the event, the Queen wore a beautiful floral dress.

Despite the weather reaching 29 degrees Celsius on Tuesday, Her Majesty still wore a long dress with long sleeves.

READ MORE: ‘The body does not lie’: Inside Sophie Wessex & Edward’s marriage

For footwear, the Queen chose her favourite black loafers with kitten block heels.

Queen Elizabeth’s jewellery accessories usually remain the same for these sorts of audiences.

She chose her stud pearl earrings paired with a three-strand pearl necklace.

For makeup, Her Majesty wore one of her favourite shades, bright pink.

The Queen has long been a fan of Elizabeth Arden’s lipsticks.

So much that the brand has held a royal warrant for over 55 years.

Royal fans took to social media to praise the Queen for her surprise appearance.

The Queen appeared at Windsor Castle on Tuesday (Image: PA)

“Love having the privilege to see Her Majesty’s pictures.”

The George Cross is the highest civilian order.

The Queen has bestowed it on the NHS to celebrate coronavirus heroics.

This is the Queen’s first public investiture since knighting Captain Sir Tom Jones two years ago.