Putin’s Autarky Choice Is Between Stalin and Hitler 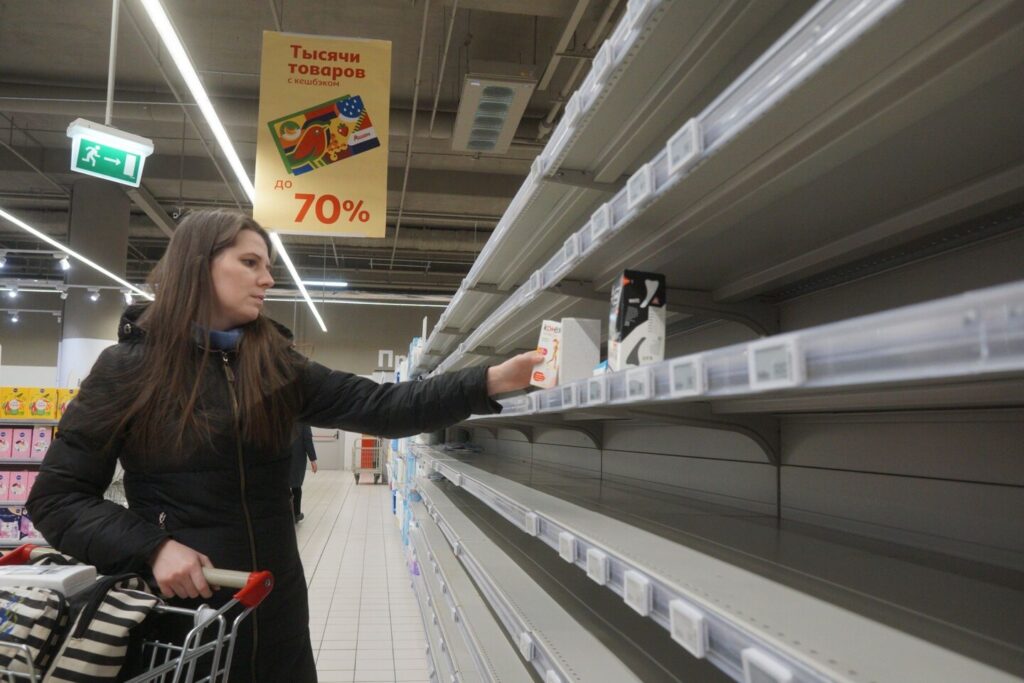 Two months after Vladimir Putin ordered an invasion of Ukraine, it’s clear there will be no quick return to any kind of normalcy for Russia, and particularly of the economic kind. With no negotiated end to the war in sight, Russia is set for a protracted period of living under tough Western sanctions and thus under enforced autarky.

Putin’s line, echoed by other Russian government figures, is that Russia is too big to be isolated and the West is not big enough to isolate it. While that’s true as far as it goes, isolation is a straw man. The goal of the post-invasion sanctions is far more practical — to undermine Putin’s ability to wage the current war and the likely future ones. The sanctions are designed to weaken, not to isolate, and while Russia can draw on its own past experience as well as on that of modern-day sanctioned nations such as Iran, it is in uncharted territory: The hurdles it faces are higher than those that Joseph Stalin and the ayatollahs have had to jump.

The fascist states of 20th-century Europe saw economic self-sufficiency as a policy goal — one that helped bring about World War II. Adolf Hitler, as Tiago Saraiva and M. Norton Wise wrote in a 2010 study of fascism and autarky, “explored the question of whether autarky in raw materials and food could be attained within Germany, even assuming strict National Socialist leadership of the state. He concluded that for food the answer was a ‘flat no’. The only viable remedy lay in the expansion of Lebensraum to the East.”

Stalin’s Soviet Union, by contrast, did not pursue self-sufficiency by choice, as Michael Dohan, a U.S. scholar specializing in the Soviet economy, pointed out in 1976. Stalin’s import substitution drive followed the collapse of Soviet foreign trade in 1932, caused in part by the protectionist tendencies in the Great Depression-hit Western world and in part by Stalin’s brutal collectivization policies that caused a famine and thus undermined Soviet agricultural and energy exports. Dohan wrote:

Faced with declining export volume and having exhausted all credit lines, the USSR virtually ceased placing orders for machinery in Germany between September 1931 and mid-1932. To offset the sudden reduction in import supply, an intensive domestic campaign, replete with factory meetings, news publicity, and “anti-import committees,” was undertaken in late 1931 to find ways to eliminate or reduce imports of raw materials and machinery. Domestic versions of imported machinery were rushed into production, products and projects were redesigned to eliminate imports, and, in many cases, imports were simply done without.

The consequences of this policy were so far-reaching that I caught the tail end of them in the 1970s and ‘80s: The Soviet Union tried not to import anything it couldn’t reinvent or rip off, and that meant a general shortage — and a kind of cult — of imported goods. In the absence of competition, Soviet-made things tended to fall apart in one’s hands and Soviet food didn’t tend to melt in one’s mouth. Journalist Julia Ioffe recently told an unforgettable Soviet joke about that on Bill Maher’s show.

So far, Putin’s vision of the immediate future appears to resemble a Stalin-style forced autarky drive — with some 21st-century twists.

Unlike the Soviet Union in the 1930s, Russia is not at risk of a debt default. It still has plentу of money coming in from energy exports: If they continue unabated, the country stands to earn $321 billion from them this year, an increase of more than one-third from 2021. This bonanza has allowed the government to ease currency controls imposed to prevent an outright panic as the invasion began, and the ruble’s exchange rate has stabilized. Russia could pay for all the imports it needs — but it’s hard put to find foreign companies willing to sell it the parts and materials it doesn’t produce. An increase in energy revenues coupled with the cessation of Western imports have produced a record current account surplus.

According to a recent Higher School of Economics report, the share of foreign value-added in Russia’s consumption of electronics approaches 70%. It is above 50% for medicines, electrical equipment and cars and almost 50% for industrial equipment; in the late 1920s, only about a quarter of industrial machinery was imported, according to Dohan. About half of the foreign value-added comes from the European Union, the U.S. and Canada, which have imposed the harshest sanctions on Russia.

Central Bank governor Elvira Nabiullina made it clear in a recent speech to parliament that she expects the entire structure of the Russian economy — the relative strength of industries, the labor market, consumer demand — to undergo drastic change. A move toward greater self-sufficiency is the only path forward under current policies.

The predicament of Putin’s Russia, however, is worse than that of Stalin’s pre-World War II Soviet Union in several other important ways. The machinery of the 1920s and 1930s was easier to replicate than today’s electronics, as even China, which doesn’t face particularly crippling sanctions, has found out in recent years. In the 1990s and 2000s, Russia became so integrated into global value chains that even the complex products it has proudly made domestically cannot function without foreign-made parts: Sukhoi Superjet airliners, for example, use engines jointly produced by a French-Russian joint venture which can no longer function under sanctions.

Import substitution worked well in the food industry after the debt crisis of 1988, when imports became too expensive for most Russians, and then again in 2014, when the Russian government banned many European foods in retaliation for European Union sanctions. It’s much harder to replace the Western industrial goods that have defined Russia’s relative prosperity under Putin. The exodus of almost all Western household brands leaves a void. For all the talk of import replacement, the Russian Ministry of Industry and Trade recently issued a directive allowing Russian companies to import a long list of goods without their producers’ knowledge or permission. These include Teslas, iPhones, Xboxes, Siemens washing machines, Michelin tires; all of these could be quickly replaced with Chinese-made or even, in the cases of washing machines and tires, Russian products — but the ministry suspects consumers might not be entirely happy with the substitutes.

It’s even been reported that Russians might be allowed to use pirated software under a “forced licensing” mechanism. Give me autarky, but not just yet: All that Russia has achieved in technology has been built on Western software, now no longer available through official channels.

It’s not that the Putin regime cares much about Russians’ comfort — it just hasn’t reached the point where it can ignore ordinary Russians to the same degree that Stalin’s regime did. Patriotism is all well and good, but Putin still keeps imploring the government and the central bank to keep inflation in check. The Bloomberg consensus forecast for the Russian economy promises a 10% GDP contraction this year, a deeper drop than the 3.1% contraction of the Iranian non-oil economy in 2012, when the country was hit by major sanctions. This makes a jump in unemployment unavoidable, even if Iran’s experience shows that labor resources eventually will be reallocated. And, given the relative failure of the initial onslaught on Ukraine, Putin cannot but harbor doubts about the effectiveness of his domestic repression machine. Even if he drinks copious amounts of his own Kool-Aid, as his public utterances suggest, he cannot but wonder how much hardship Russians will take for the sake of his imperialist designs.

Alexander Prokhanov, a hardcore nationalist author who has sung praises to Russian invasions since Afghanistan in 1979, wrote recently that the Russian people would adapt to any kind of economic calamity:

They’ll leave the cities for the fields and forests… They’ll gather mushrooms, berries, nuts — in moments of great woe, the Russian people are willing to turn into a nation of chipmunks, a nation of hamsters hoarding all kinds of roots and tubers for the winter.

He’s not entirely wrong: The older generation at least still has its Soviet survival skills, its tolerance for long lines and shortages, its black-market savvy, its not-quite-unlearned hamster mentality, if not the actual ability to live on nuts and berries. One could use the full force of propaganda and repression to induce the transfer of these skills to the younger generation. That, however, may require crossing an important line in domestic discourse — the line between blaming Russia’s economic woes on a hostile West, as Communist ideologists did, and pushing autarky as a path to greatness, Hitler- and Mussolini-style. It seems a fine distinction after the Russian war crimes in Ukraine, but it’s not trivial: Once Russians feel the full onslaught of economic pain, they will need to explain to themselves what they’re paying for and whether the price is worth it. Nothing short of a full, nationwide descent into fascism can sustain the regime then.

Yes, Russians Know What Their Military Is Doing in Ukraine: Leonid Bershidsky

Germany’s President Embodies the Past Sins of Its Russia Policy: Andreas Kluth

Leonid Bershidsky is a member of the Bloomberg News Automation team based in Berlin. He was previously Bloomberg Opinion’s Europe columnist. He recently authored a Russian translation of George Orwell’s “1984.”