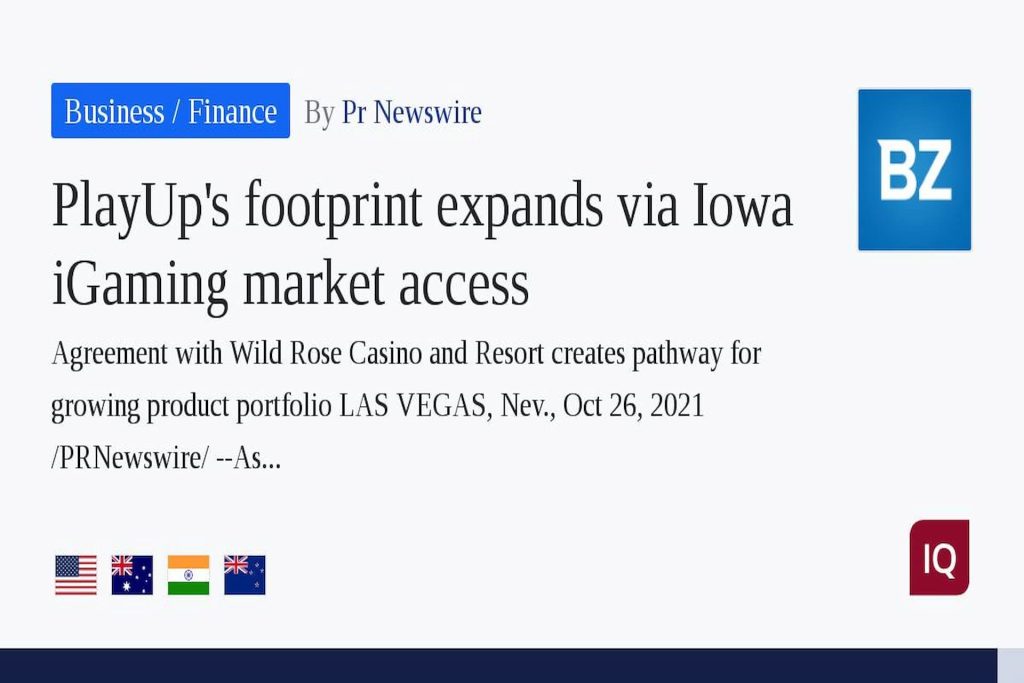 As part of its aggressive growth plan in the U.S. PlayUp has secured market access for iGaming in Iowa. The deal comes on the heels of PlayUp’s announcement last week of market access for sports betting in Iowa and Indiana along with iGaming for New Jersey.

The deal, inked through a partnership with Wild Rose Entertainment, adds a second iGaming jurisdiction for PlayUp. Pending both legislative and regulatory approval in Iowa the burgeoning iGaming sector is a key indicator for PlayUp’s diverse product portfolio expansion beyond its core sports betting product.

If officials in Iowa should move forward with iGaming, PlayUp will be poised to increase its operating footprint in the U.S. where it is a licensed operator in Colorado and is expected to gain regulatory approval in New Jersey soon.

Dr Laila Mintas, PlayUp USA CEO, said “At our core we are a daily fantasy sports operator. We are proud of these roots and that we are Australia’s number one DFS operator and offer some of the world’s largest DFS prizes. We also view a diverse product portfolio as key to our long term growth and stability. iGaming is central in that diversification and we are aggressively getting market access in all states that are offering it, or will be offering it in the future.

Earlier this year investment bank Goldman Sachs projected the iGaming market in the U.S. to reach $39 billion in 2033. Officials with Wild Rose look forward to adding iGaming to its expanding gaming market, should regulations pass to allow it.

“The gaming market and consumer demands are always changing,” Tom Timmons, President and COO of Wild Rose Entertainment said. “We are proud to have a great partner like PlayUp in our corner to maximize our potential with iGaming should it come to Iowa.”

PlayUp has already begun the regulatory process to gain licensure in Iowa for sports betting and once the regulatory framework is in place for iGaming will do the same, according to Dr Mintas.

She said the company will take an active role in helping to shape the regulations and provide input to state legislators and regulators if the opportunity presents itself.

PlayUp is a next generation entertainment and technology group that enriches the lives of people through entertaining, rewarding and responsible online betting. The company develops innovative betting technologies in-house to power brands and deliver world-class user experiences. PlayUp’s energies are focused on fulfilling the needs of dedicated and passionate users who seek a deeper connection to the games they play.

The company holds online betting licenses in multiple jurisdictions and currently operates in Australia, New Zealand, India and in the U.S.

Wild Rose is an Iowa-based gaming company that operates three casinos in Clinton, Emmetsburg and Jefferson. Since opening its first casino in June 2006, Wild Rose has welcomed more than 15.5 million people to its three properties with visitors from all 50 states and 27 countries. As a company, Wild Rose casino revenues have generated more than $49 million for community projects and organizations in Greene, Palo Alto and Clinton counties as well as $226 million in state and local fees and taxes.