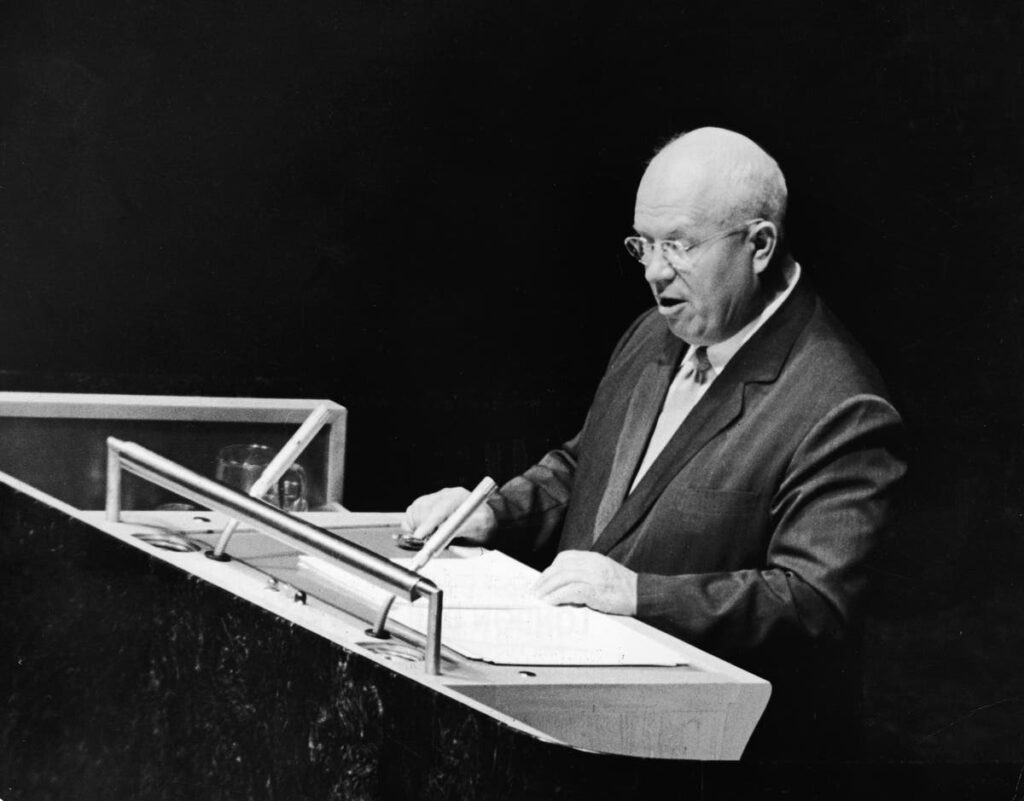 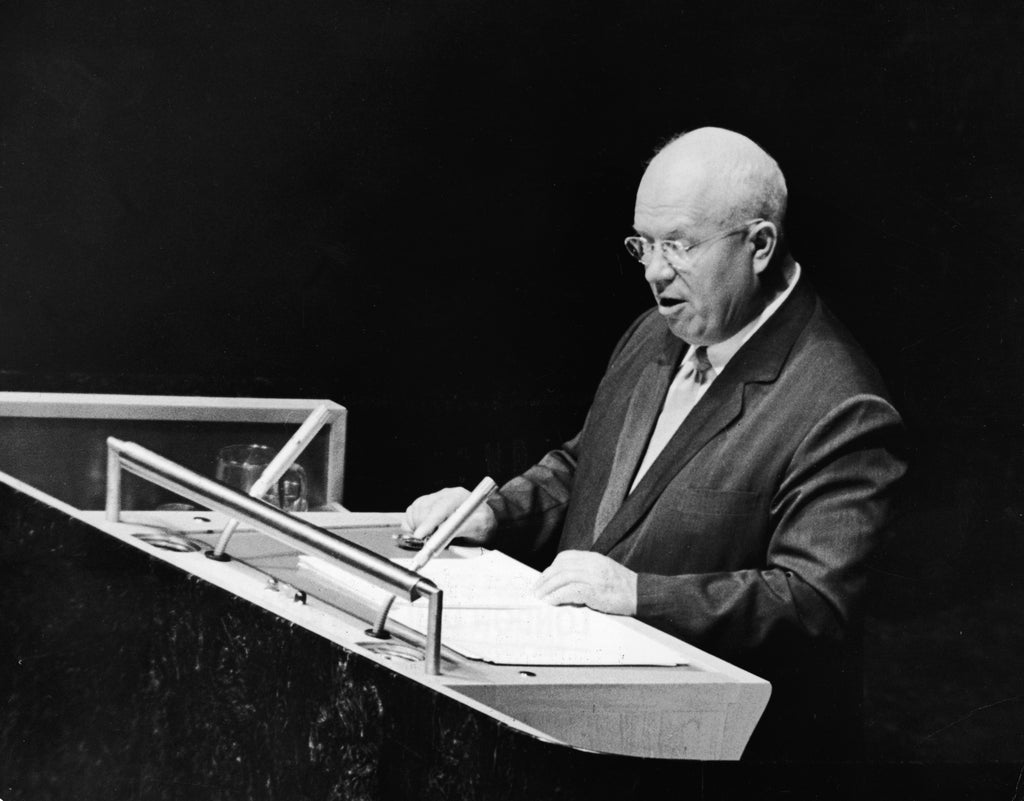 A granddaughter of Nikita Khrushchev says she is “embarrassed” by Vladimir Putin’s invasion of Ukraine, and believes the late Soviet leader would think it “despicable” that a city he rebuilt after the Second World War was being attacked by Russian troops.

Nina Khrushcheva, who was just five or six when her grandfather died in 1971, says he and US president John F Kennedy had resolved the Cuban missile crisis of 1963 in a matter of days because both were both “freaked out” by the prospect of mutual annihilation.

“Now look at it today. Putin is not freaked out,” Ms Khrushcheva tells The Independent. “In fact, he has said he has opened the nuclear arsenal.”

Khrushcheva, who was born in 1964, started teaching in the US in 2002 and is currently a professor of international affairs at the New School in New York, a private research university. She says she felt “horrible” about Mr Putin’s decision to invade, a Ukraine, a nation he has claimed are brothers, and was embarrassed by his actions.

“I can’t believe that, although he’s claiming he’s trying to prevent the war, he’s actually waging a war on a nation he says is the same as Russia – a brotherly nation of Ukrainians,” she says. “That’s very Orwellian, like every dystopian novel you can get, you know, Huxley, Orwell… basically, take your pick.”

She adds: “It’s hard to know what he wants anymore. I don’t even understand why people keep calling me because I was completely wrong.

“I thought until last Monday, that it would be just suicidal to go and invade a country, the country that you say that you still care about. Especially after all this brouhaha with American intelligence.”

Khrushcheva, whose books include Imagining Nabokov: Russia Between Art and Politics, and In Putin’s Footsteps: Searching for the Soul of an Empire Across Russia’s Eleven Time Zones, says she feels the west has not handled the crisis well and appears set to try and humiliate the Russian leader.

She says it feels as if the Biden administration is seeking to provoke some sort of response from him.

“Look, the fault is squarely, 1,000 per cent Putin’s, because even if you feel that you’re provoked, it doesn’t mean you’re gonna go in and bomb somewhere,” she says.

“But if the objective of the Biden administration was by screaming it, to stop it, they clearly failed. Whatever the explanation they have right now, they failed, because that was clearly the wrong policy.”

Like a number of analysts, Khrushcheva says she had assumed Putin would use the threat of his forces massed on the border, to seek some leverage from Nato and the west, and that she had assumed he would display his “savvy side”.

As it was, the efforts at diplomacy by Nato nations, including Britain’s foreign secretary Liz Truss, whose meeting with Putin’s foreign minister Sergei Lavrov was likened by the Russian diplomat to a conversation of “the mute with the deaf”, had sometimes been clumsy.

“Once again, I want to be very clear – I’m not blaming anybody except for Putin, because even if you are provoked…,”she says.

“It was just like a giant post-Covid syndrome. You know how people got frustrated and they just beat up a flight attendant or punched someone. So he was, ‘I don’t care about nothing, just bomb a country’.

“So nobody except for Putin is responsible for that and guilty of that. And he should be judged for that.”

Khrushcheva says she does not see any easy way of the crisis. “At some point down the road, the west might find a way to build better relations with Russia, but in the short term the present crisis had to be addressed.”

Khrushcheva was Khrushchev’s great-granddaughter by birth and granddaughter by adoption. She was born in Moscow and graduated from Moscow State University in Russia, before getting a PhD from Princeton in 1998.

On her blog she writes: “I am very proud of my name. It is my grandfather’s – Nikita Khrushchev. Here, I am with my grandfather in 1971, in his retirement home in Petrovo Dalnee, 30 miles west of Moscow.

“There is just one problem with having this last name: often people don’t talk to me, they talk to Khrushchev, the late Soviet premier. At times I become only a prop for their ideological idiosyncrasies or historical memories, like those cardboard figures – Nixon, Clinton or Schwarzenegger – that you take pictures with at an amusement park.”

Khrushchev spent much of his life working in the Donbas region of eastern Ukraine. In the Second World War, Kiev was captured and destroyed by Nazi forces in 1941, and up 5 million Ukrainians were killed, including more than 1.6 million Jewish Ukrainians.

After the war, Khrushchev was made secretary of the Communist Party of Ukraine and oversaw the rebuilding of Kiev and the rest of the country. He would later be sent to Moscow to advise Stalin, and in 1953 became leader. He was pushed aside in 1964.

In his memoirs, Khrushchev wrote of Ukraine: “I’ll say that the Ukrainian people treated me well. I recall warmly the years I spent there. This was a period full of responsibilities, but pleasant because it brought satisfaction.”

She said her grandfather was a war general who knew the cost of conflict. That was why he had made efforts to push towards disarmament, even though he was laughed at.

Asked what she thought her grandfather would think of Mr Putin’s actions she says: “Khrushchev restored Kiev after World War Two, so he was very loving towards that city. He did the best to restore it and they could use it again, and now it’s being bombed by another leader of Russia.”

She adds: “He’d think it was outrageous and despicable and impossible.”