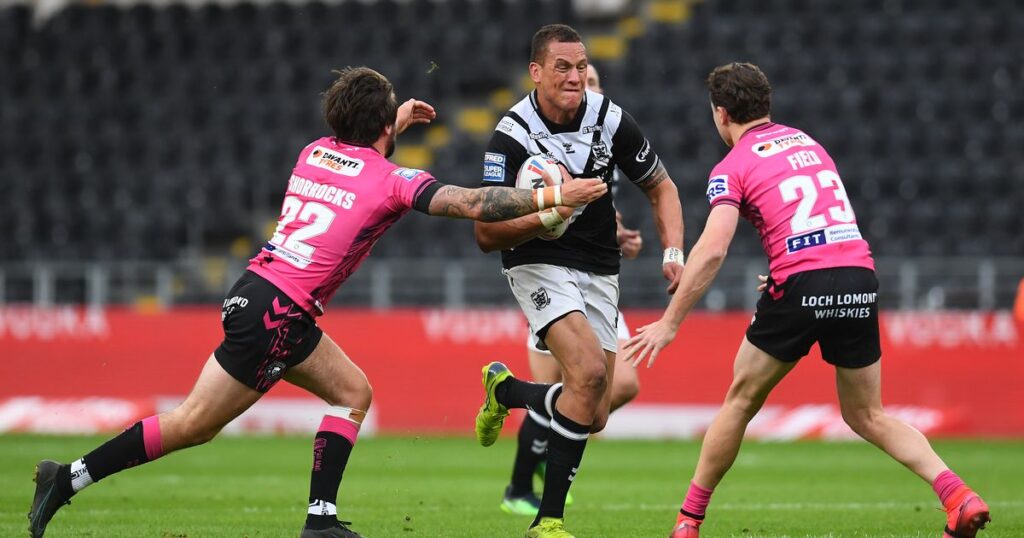 After a slow start, Kane Evans is upping through the gears at Hull FC. Standing at 6 feet 7 inches tall, the prop has now made ten appearances for his new club, and is very much part of a strong pack of forwards.

Getting better by the week after shaking off niggly injuries, the Fijian international’s recipe is pretty simple, and its all centred on hard work – even if playing in the scorching French heat.

“We’re going well bro, just grafting hard,” Evans told Hull Live. “Our forward pack has made a promise to each other that we’re going to keep on working hard every day. We’re making sure that we’re the last ones out of the gym and off the field. We’re just concentrating day by day to get a win this week and that’s the plan.

“Weather shouldn’t be affecting our game – I think that’s more of a mental thing. You can use that as an excuse but if you’re a player in any sport that’s just going to blame the weather it just shows where you’re mentally at. This week is just another game and we’ve just got to go there and get the win. That’s the most important thing.”

Discipline was more of a factor in Perpignan than the weather. Hull actually completed their exit sets well against Catalans, with errors in good ball being their undoing.

They then compounded those errors with poor discipline, and from that the Dragons took advantage. There’s no kidding what areas Hull need to tighten up at Warrington on Friday night, though, and for Evans personally, who is setting his targets high.

“Definitely the penalty stuff,” Evans pointed out as a Hull shortcoming. “We’ve spoken about our discipline in defence and not trying to shoot the line. I think a few times we were a bit too keen to get off the line and make a hit. We’ve been working on that and that’s going to our main focus this week.

“Personally I’m at the point where I think I’ve just got to be my best from now on. I had a talk with coach the other day and he set out what I need to do to improve. Obviously I had all those little niggles and I’ve been building, and now I’ve got to be at my best.

“There’s no excuse for the end of the season. It’s time for me to go up a level with my game and hold it. It’s a challenge for me but its good as we’ll see how I turn out for the rest of the year which I’m excited for.”

Making his mark, Hull fans are now warming to Evans, who is getting stronger by the week. He knows what he has to do now. Lead by example, focus on his roles, and let the results do the talking. He’s under no confusions either on what he needs to do to make all that a reality.

“For me being a tall, lanky person, when I get a bit tired, I’m not as powerful going into contact,” Evans continued. “Some of the teams are getting under me and getting three or four in and driving me back.

“I’ve got to be more aware and get a bit more fitter so I can power into contact and find my front rather than get pushed back and it be a slow play of the ball for the next person. That’s something I’ve got to work on and in defence just my movement, so when I’m tired to have that extra kick off the line. I’ve still got loads to work on which is exciting. I’m embracing it and going hard every day.”

And as far as the team goes, Evans is confident the pack at least will continue to tick those boxes.

“I think our forward pack in general is good,” he added. “I’ve never felt as safe. We’re all hard grafters and we’re going hard for each other. We just need to keep sticking together, but I take real confidence each week playing with these lads next to me.”