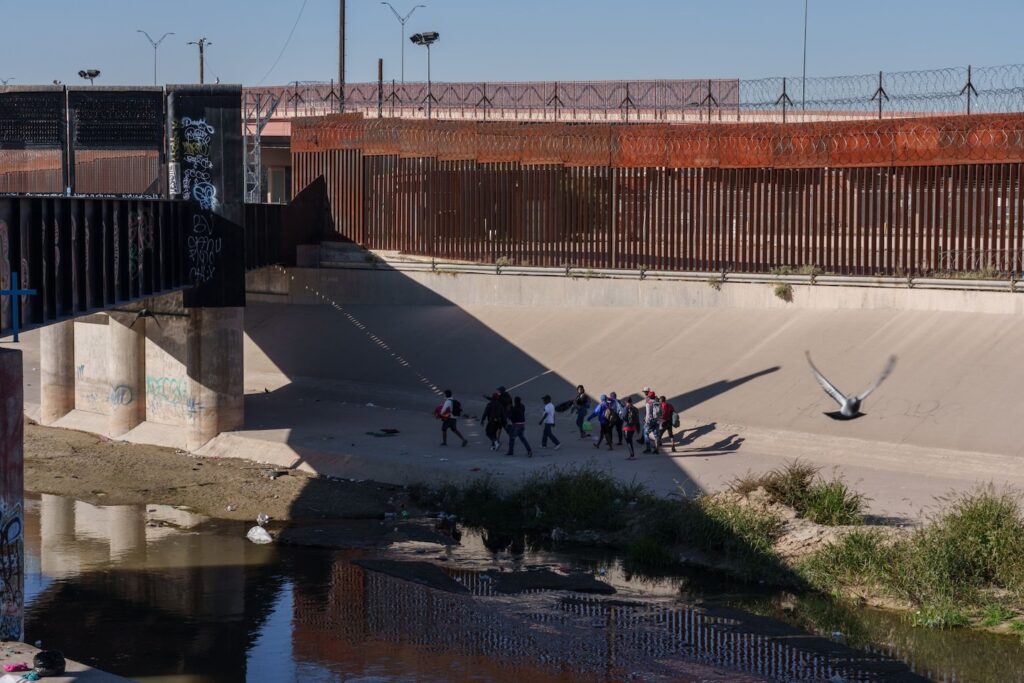 US President Joe Biden promised a more compassionate immigration policy than that of his predecessor, Donald Trump, who moved in myriad ways to restrict the flow of newcomers to the country. An unprecedented surge of migrants crossing the US southern border, however, has reignited the long-running debate in the US over immigration and tested Biden’s relatively welcoming approach. In an effort to cope with the increase in arrivals, his administration Jan. 4 announced a new policy expanding opportunities for people from four countries to come to the US directly from their homelands while restricting their ability to enter from Mexico.

1. How many people are illegally entering the US?

US Border Patrol reported 2.2 million encounters of migrants entering the country without authorization in the 12 months that ended Sept. 30, the vast majority crossing from Mexico. The number, which includes some people trying more than once, compares with almost 1.7 million the year before, the previous record. It’s impossible to know what share of border crossers manage to evade authorities; the Department of Homeland Security in 2017 estimated that 15% to 45% do.

2. Where are migrants coming from and why?

Historically, the majority of people who illegally crossed the border were Mexicans. By 2016, deteriorating conditions in Central America’s so-called Northern Triangle — consisting of El Salvador, Guatemala and Honduras — made people from this region the biggest group. More recently, authorities have intercepted large numbers of people from Venezuela, Nicaragua, and Cuba. In November, more than 74,000, or 56%, of the migrants apprehended were from these three countries. Economic and political instability there has been worsened by the pandemic, and the Biden administration argues that this accounts for the surge in overall arrivals. Critics of the president say his accommodating approach to immigration has served as an invitation to foreigners to illegally enter the US.

Since taking office in January 2021, Biden, a Democratic president, has unwound many of Trump’s immigration policies.

• He halted most though not all new construction on barriers Trump commissioned on the US southern frontier.

• Immigration arrests in the US interior were down in fiscal year 2021, which comprised most of Biden’s first year in office, compared to 2020 under Trump.

• Biden originally tried to rescind Title 42, a public health order dusted off under Trump to curb migration at the start of the Covid-19 pandemic, only to be thwarted by a judge’s ruling. In about half of the apprehensions of migrants in fiscal 2022, authorities used the rule to quickly send the individuals back to their homeland or to the country from which they entered the US. The alternative is to process apprehended migrants under regular immigration law. That gives them a chance to remain in the US at least temporarily in order to make long-shot bids at gaining asylum, available to people who can show they have a legitimate fear of persecution at home. In October, in the face of the influx at the border, Biden actually expanded use of Title 42, applying it to all Venezuelans entering the country without authorization. On Nov. 15, a federal judge ruled against the continued use of Title 42. But on Dec. 27, the Supreme Court blocked the ending of the restrictions while it considers a bid by Republican state officials to keep the rules in place.

• On Dec. 5, Biden announced plans to expand a humanitarian program to allow up to 30,000 additional migrants per month from Cuba, Nicaragua and Venezuela as well as Haiti, also a source of increased arrivals. In a deal with Mexico’s government to accompany the new program, more migrants from the four countries will be refused entry and returned to Mexico if they try to cross the US southern border without authorization.

4. How has the fight over immigration been recharged?

To express their dismay with the increase in illegal crossings, Republican governors in Texas, Arizona and Florida have sent thousands of apprehended migrants north to so-called sanctuary cities, which refuse to comply with immigration-enforcement efforts. The unannounced arrivals have taxed social services in New York City, Chicago and Washington, DC. Although it’s the federal government’s responsibility to patrol the border and process unlawful entrants, frontier states end up as a way station for many of those awaiting asylum hearings and for migrants who are never apprehended. The office of Texas Attorney General Ken Paxton estimated in 2021 that his state spends $850 million annually on health, medical, housing and educational costs related to undocumented immigrants. Republican officials across the country have said that immigrants living unlawfully in the US take jobs from citizens and are more prone to commit crime, claims amplified by party candidates in Nov. 8 congressional, state and local elections.

Some economists say illegal immigration reduces work and wages for low-skill workers, especially Black and Hispanic Americans; others challenge that argument and the data behind it. A number of studies have concluded that migrants commit crimes at lower rates than native-born Americans. For example, in Texas in 2018, the share of undocumented immigrants who’d been convicted of a crime was 45% below that of native-born Texans, according to a Cato Institute analysis. Scholars who support higher levels of immigration also say estimates like Paxton’s fail to consider economic activity and tax revenue generated by immigrants.

6. How does Biden want to change immigration policy further?

On his first day in office, he proposed a bill creating an eight-year path to citizenship for most of the 11 million immigrants living illegally in the US. However, Biden’s party hasn’t had sufficient control of Congress to pass legislation without support from Republicans, among whom views on immigration hardened under Trump. Even if the bill were to become law, it deals only with undocumented migrants in the US as of Jan. 1, 2021, leaving unresolved the issue of newer and future arrivals. Some immigration experts argue that to seriously slow unlawful border crossers, the US must greatly expand visa access for migrant laborers. Such a plan would also run into Republican opposition to opening the door to foreigners.