Gwent, Orlog and Tales of Tribute: Why video games include tabletop games 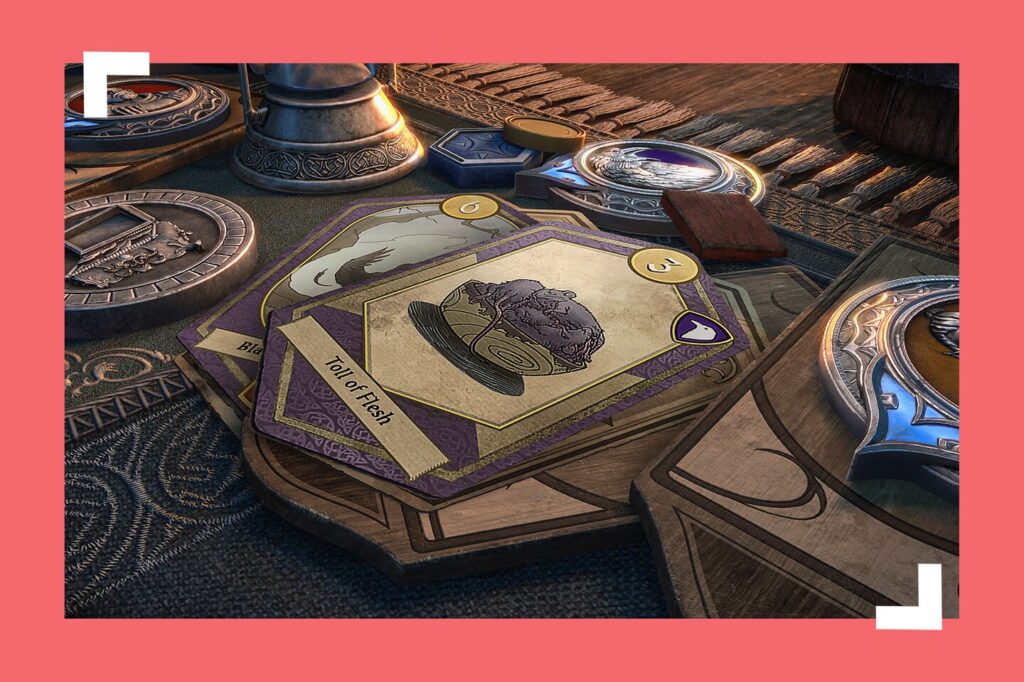 There’s a new game catching on at Zenimax Online Studios. More than 30 staff members entered a company-wide tournament last month. Rich Lambert, the creative director of the Maryland-based studio, said so many people have been playing that it’s cut into their productivity.

The game is called Tales of Tribute. It’s a resource-management card game Zenimax has designed for the virtual taverns of “Elder Scrolls Online,” the popular fantasy MMO the studio has been supporting for more than a decade.

Studios have been creating miniature games inside their virtual worlds for decades. But as games have evolved to last months (if not years) as live services, some designers have invented one-of-a-kind virtual tabletop games to give players another way to spend their playing time.

“The more alternate activities you have, the more things the players can do to kind of get lost in the world,” Lambert said in March. “Questing and killing is fantastic but sometimes … as a player, I need something a little different.”

Video games keep getting longer. It’s all about time and money.

“Final Fantasy VIII” includes the entirely optional Triple Triad. “Star Wars: Knights of the Old Republic” has the cantina game Pazaak. And there’s been a recent spate of wholly unique tabletop games built around the lore of certain role-playing games. In Tales of Tribute, for Elder Scrolls Online, players draw from a shared deck to accomplish certain tasks to reward points to win the game. Zenimax plans to include Tales of Tribute in the sixth major expansion to Elder Scrolls Online, which will release on June 21.

Guerrilla Games created Machine Strike, a chess-like board game, for their sequel “Horizon Forbidden West,” which was released in February. And Ubisoft invented Orlog, a dice-rolling game of chance, for their latest in the Assassin’s Creed franchise, “Valhalla.” By Ubisoft’s own account, Orlog has proven to be “unusually popular with players.” Six months after “Valhalla” was first released, the studio reported more than 80 percent of players had tried the game.

In an email to The Post, Benoit Richer, the Ubisoft Montreal game director for “Assassin’s Creed Valhalla,” wrote that Orlog allows players to experience a deeper sense of immersion. In Orlog, players make use of favors from the gods (special in-game abilities you can collect) to beat their opponents. In many ways, the combination of blind luck from a roll of the dice and divine intervention play into the Norse mythology Ubisoft built “Valhalla” around. Richer, who considers himself a “board game enthusiast,” said Orlog makes “Valhalla” a bit “more believable and richer.”

In 2021, Ubisoft partnered with PureArts, a company that sells video game collectibles, to turn Orlog into a physical product. Once the project was announced, PureArts met its initial fundraising goal in 35 minutes. Nowadays, you can buy a box set of the dice game for $40, like any other board game. In addition to the sets sold in the original Kickstarter campaign, PureArts has shipped 60,000 editions of the board game, according to Dan Richard, the marketing and sales director for the company.

Can You Pet The Dog? In many games, and in this article, you can.

Orlog probably won’t fade into the horizon with “Valhalla.” Ubisoft is working on a live-service game code-named Assassin’s Creed Infinity, which is supposed to bring together all of the past games in the franchise. When asked, Richer wrote that, given how popular the dice game has been with players, he expects players will see more of it in the future.

All of these tabletop games provide players an opportunity for turn-based strategy, which is naturally a slower, more methodical style of gameplay than open-world combat. In “Horizon Forbidden West,” each totem for Machine Strike is modeled off the robotic animals you fight against in the wilds of Horizon’s world. To defeat a glinthawk in “Forbidden West,” you need to aim and strike the sack of chillwater in its breastbone, all while dodging to avoid the creature’s incoming attacks. To win against a glinthawk totem in Machine Strike, you need to methodically outmanuever your opponent in a step-by-step process across tiles on the game board. You’re allowed the time to step back and think. The two types of gameplay are like different genres of music, and developers say the minigames allow players to continue to play in their virtual worlds without getting bored of the same song and dance.

“We want people to want to log in and play the game on a regular basis,” Lambert said. “So, finding new ways to give them reasons to do that is important.”

For the developers designing these tabletop games, the gold standard is Gwent, CD Projekt Red’s war-waging card game that started as an optional past-time in “The Witcher III,” which was originally released in 2015. Now as a standalone game with its own esports circuit, Gwent is one of the most popular digital card games alongside “Magic: The Gathering Arena,” “Hearthstone” and “Legends of Runeterra.” CD Projekt Red is even working on a single-player title of the card game that’s expected to be released this year.

Pawel Burza, the communications lead for Gwent, said in March that CD Projekt Red sees an uptick in Gwent players whenever there’s a big announcement in The Witcher franchise. It helps that The Witcher now has a Netflix show starring Henry Cavill. If you’re the fan of a certain fantasy world, like The Witcher, Burza said you’ll eventually want to read or play all the entries associated with it.

“It’s just giving players more things to do within the ecosystem, right?” Burza said. “I think it’s just more interesting for the players to have multiple things to try.”