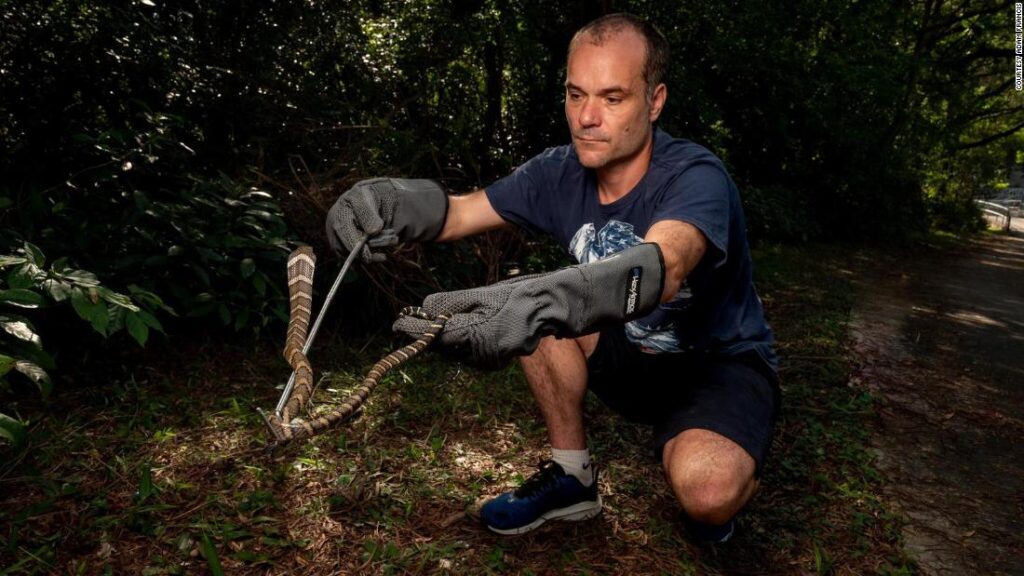 
Editor’s Note — Monthly Ticket is a CNN Travel series that spotlights some of the most fascinating topics in the travel world. In October, we shift our focus to the offbeat, highlighting everything from (allegedly) haunted spaces to abandoned places.
Hong Kong (CNN) — A fraction of a second after William Sargent’s torch light catches the unmistakable glint of snake skin he roars into action, sliding on a protective glove and launching himself into the dense green jungle of northern Hong Kong.

The 46-year-old re-emerges on the paved trail moments later with a many-banded krait, also known as Bungarus multicinctus, a species covered in zebra-like black and white stripes that is one of most venomous snakes in the world.

“This one is a real beauty, it’s stunning,” says Sargent, sweat gathering on his brow as he strains to keep the lively reptile from slithering out of his grasp. “If there was an elite model for snakes, this would be right up there. But this is the one you really don’t want to get bitten by. If not treated, you could have respiratory failure and die.”

Since 2017, Sargent, a police-approved snake expert, has been running nocturnal so-called “Snake Safaris” through the verdant, biodiverse terrains of Hong Kong such as Tai Mo Shan Country Park — home to the city’s highest peak in the northern New Territories region — taking hundreds of daring visitors along every year.

The Brit moved to the city at the age of two, honing a passion for herpetology — the study of amphibians and reptiles — while exploring Hong Kong’s lush subtropical landscapes as a teen. Besides fulfilling his own interest, the guided tours are a way for Sargent to combat stigma, improve awareness and build appreciation of snakes.

“The vast majority of snakes that show up in your house don’t want to live there. It’s just by circumstance, like a fish jumping in your boat,” he says. “If you’re sensible, there’s nothing to be afraid of. But sadly, many snakes are killed because of fear.”

While Hong Kong is a global metropolis nearly as large as Los Angeles, containing some of the most densely populated districts in the world, about 40% of its landmass is protected country parks, meaning its 7.3 million residents often come into contact with wildlife, including more than 50 snake species in the city — from the potentially deadly King Cobra to the Burmese Python, which can grow to over 26 feet.

One of the non-snakes you might meet on a safari is a brown tree frog.

“Given its size, Hong Kong has a disproportionately high number of snakes,” says Dr. Sung Yik-hei, a professor at Lingnan University and one of the city’s foremost reptile experts. “That’s because of the city’s great variety of habitats: mountains, coastal areas, lowlands, wetlands, and freshwater streams.”

Despite these reptilian riches, there are little more than 100 snake bites in Hong Kong each year — the equivalent odds of about one in 50,000 — and the last death was of a shopkeeper defanging a non-native snake for which there was no antivenom in 1988.

“The likelihood of encountering a snake is not low,” adds Sung. “But the chance of getting bitten is very low. Even if you are, Hong Kong is one of the safest places in the world for snakebites because of the quality and proximity of hospitals.”

For his part, Sargent receives callouts every week to capture snakes everywhere from schools to prisons to homes, and once, a beach on Lantau Island to ensnare a 15-foot python. As of August, he’s the first expert to participate in a “Rapid Release Program” — meaning that rather than have to go through a days-long, bureaucratic procedure of sending a captured snake to a police station and further facilities, he can release it in the nearest country park, reducing workload and keeping the snakes far healthier.

That policy change has proven an uphill struggle amid a complex cultural context.

In Hong Kong, snakes are eaten in a soup, used in traditional Chinese medicine, or are otherwise simply viewed as a menace. The result is that across China nearly all of the larger snake species are classified as vulnerable, threatened or endangered on the International Union for Conservation of Nature’s (IUCN) Red List, which tracks the conservation status of the world’s plant and animal species.

But thanks to Sargent — who has given talks at local schools and set up a Facebook group, Hong Kong Snakes (whose 15,000 members exchange photos, information and advice about snake encounters) — snakes are shedding that fearful reputation.

One tour attendee and member of the Facebook group, Michelle Yu, who moved to Hong Kong from Washington DC nine years ago, says that her perception of snakes has completely transformed thanks to the community. “You go from being repulsed to actively looking out for these beautiful creatures,” she explains.

For others, the experience underlines the unique contrasts available in Hong Kong: towering skyscrapers beside exotic nature. “You get this great feeling that you can escape from the city,” says Loïc Sorgho, a 42-year-old French banker. “Where else can you go from a 50-floor building to a tropical jungle so quickly?”

Over the course of a couple hours, the group encounters nine different snakes: three bamboo pit vipers; two diamondback water snakes; one bicolored stream snake; a mock viper; a greater green; and the many-banded krait, whose diaphanously soft midriff Sargent holds out for attendees to stroke. “Please don’t touch any further than half way up its body please,” he quips. “It won’t do my insurance any good.”

And there’s plenty of other wildlife to be spotted on the tour: barking deer, leopard cats, porcupines, swamp eels, birds of prey, all manner of frogs, and fire-bellied newts, whose dark undersides are peppered with bright orange and red blotches.

Towards the end of the serpentine route along rocky, bamboo-lined paths and across babbling brooks, Sargent glimpses a baby diamondback water snake coiled on a plant and picks it up. “It’s trying to get its rear fangs into me,” he says, moments before being bitten on one fingertip. “Ouch! It’s pretty toxic to geckos, but I’ll be fine.”

Once released, the snake, which has whitish yellow diamond markings running the length of its scaly body, glides away atop the moonlit surface of the water amid a chorus of cicadas and into the perfectly still Hong Kong night.