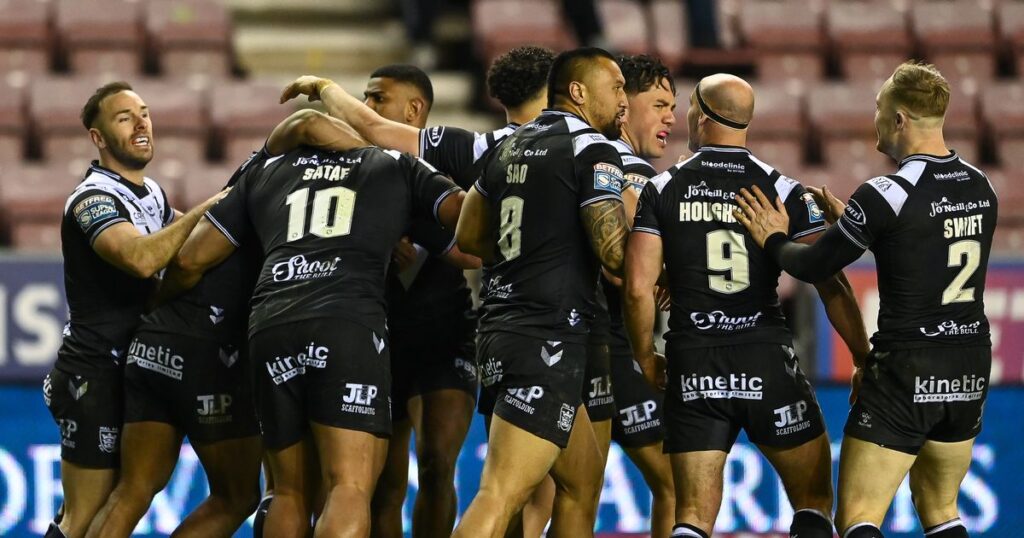 Hull FC make the short journey to Craven Park on Friday to take on Hull KR in the first derby of the year (kick off 12:30pm).

The Black and Whites will arrive at Craven Park on Friday morning on the back of two straight defeats. They weren’t far off against Wigan Warriors or Huddersfield Giants and there were some encouraging signs, but ultimately they were second best in both games.

Read more: Adam Swift settles the debate as he explains why the Hull derby is better

There can be no excuses for falling short this time around, though, in a clash that even the players are describing as a ‘win at all costs’ match-up. It will be closely contested, derbies almost always are, but after seeing Brett Hodgson name something close to his strongest squad once more, Hull supporters will make the journey over Myton Bridge with confidence.

Andre Savelio has shaken off the knee issue he picked up last weekend, while Josh Reynolds, Luke Gale and Jake Connor will be better for the run out they had together last weekend. Kane Evans is fit, too, and he’ll be keen to build some form in a sizeable pack which will hope to dominate the centre of the field.

Hodgson will have his fingers crossed that Carlos Tuimavave will be fit for the clash and his experience and temperament would be huge for Hull in an atmosphere that is sure to be hostile and intimidating. If he’s not, though, Mitieli Vulikijapani has shown he is capable of shining in the Samoa international’s absence.

The bookmakers haven’t been able to spilt the two sides in the build-up to this one, but if FC rock up in east Hull and play to their full potential, they have the talent required to take the two points back to the MKM Stadium.

The Black and Whites haven’t been to the other side of the city for almost three years, with their last game at Craven Park coming in June 2019. As such, FC boss Hodgson is yet to sample a derby day at KR and the same can be said for a chunk of his players.

The likes of Adam Swift, Chris Satae, Ligi Sao, Josh Reynolds and Manu Ma’u have all experienced the rivalry in familiar surroundings and a black and white crowd on their backs, but they are yet to step into the lion’s den due to Covid. The derby was played behind closed doors at the Totally Wicked Stadium in 2020 and it was postponed due to rising Covid cases on a couple of occasions last year.

They’ll have an idea of what to expect, but their character will certainly be tested as they step off the bus and into enemy territory.

Brett Hodgson wants to see more from Luke Gale this Friday after seeing him struggle for form in the Black and Whites line-up. Of course, Gale has only played three full games for his new club after making the move from Leeds Rhinos over the off-season, but he’s been short of his best and he cut a frustrated figure at times last time out against Huddersfield.

That connection with Jake Connor isn’t firing on all cylinders just yet and he hasn’t had long enough alongside Josh Reynolds, either. Of course, that understanding will grow given time but as the skipper and leader of the club, Gale has been challenged to step up and make more of an impact against the Robins.

The head coach will be looking at Reynolds, too, who made a bright start after coming off the bench at Huddersfield but couldn’t carry that into the second half. Connor must take responsibility as Hull’s chief creative threat because when he plays well, Hull generally pick up the points.

It’s a little too early in the season for this derby result to have make or break consequences, with around five months to go until the play-offs gets underway in September. However, it’s fair to say a defeat wouldn’t help anyone associated with the Black and Whites.

A third defeat in a row, regardless of opposition, would increase the negative momentum around the club and in turn that dials up the pressure as Hull take on Warrington Wolves on Easter Monday and Catalans Dragons the following weekend. A result, though, could see Hull enter the top four with their fifth win from their first eight league games and potentially set the tone for the next two intriguing clashes and the weeks that follow.

The first derby of the year is far from do or die, but the two points could provide the platform Hull need to build their season on.