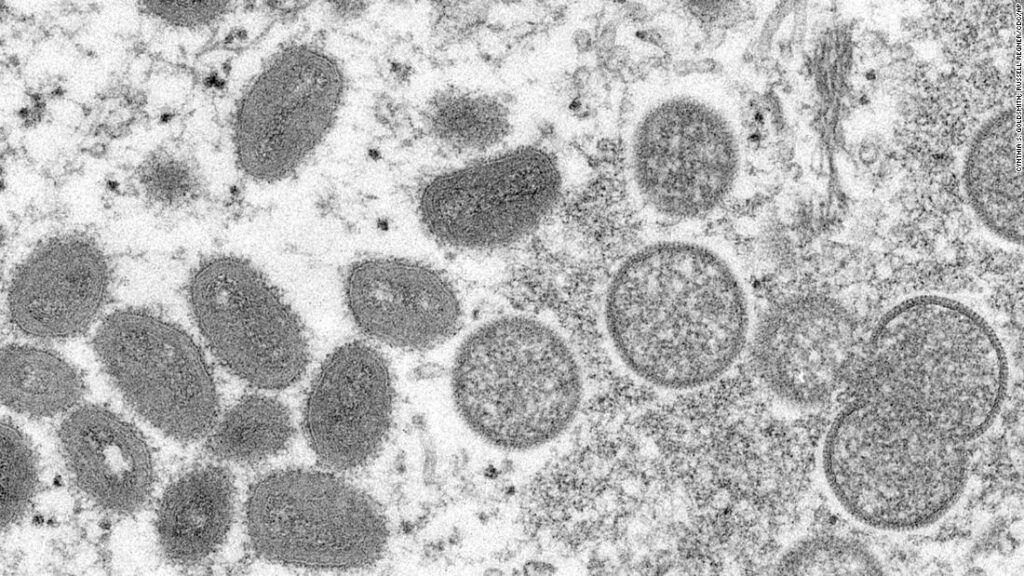 “Some groups may have a greater chance of exposure right now, but by no means is the current risk of exposure to monkeypox exclusively to the gay and bisexual community in the US,” said Dr. John Brooks, chief medical officer for the CDC’s Division of HIV/AIDS Prevention. “Anyone, anyone, can develop [and] spread monkeypox infection, but … many of those affected in the current global outbreak identified as gay and bisexual men.”

There is one confirmed case of monkeypox and four suspected cases in the United States, the CDC said Monday.

The confirmed case is in a man in Massachusetts, and the four cases of orthopox are in men in New York, Florida and Utah. Orthopox refers to pox viruses in general.

“It is likely that there are going to be additional cases reported in the United States,” said Dr. Jennifer McQuiston, a veterinarian and deputy director of the CDC’s Division of High Consequence Pathogens and Pathology.

Brooks said the CDC decided to hold a news conference about the outbreak now because LGBTQ Pride month usually kicks off around the Memorial Day weekend, and officials wanted to make sure the community was aware of the situation. He also urged doctors to be on the lookout for the disease, because it can look like other types of STDs.

“What we’re trying to do by bringing attention to the fact that some of these cases have had a genital and perianal presentation is just to remind people that people may come in for an evaluation of what they think is an STD, but we’d like the provider to think ‘could it be monkeypox as well?’ if the circumstances fit the story,” Brooks added.

Monkeypox is an extremely rare viral disease that is similar to smallpox, but it is considered clinically less severe, according to the World Health Organization. Cases usually happen in West and Central Africa. But several people have been diagnosed with monkeypox recently in areas that don’t typically see the disease, including in Canada, Portugal, Spain, the United Kingdom and the US.

Monkeypox is not a sexually transmitted disease, but it can spread through intimate contact during sex when someone has an active rash.

It also can spread through large respiratory droplets, but because large droplets don’t travel far in the air, the contact has to be prolonged for this to happen.

Monkeypox can spread through direct contact with bodily fluids or through contact with contaminated clothes or bedsheets, according to the CDC.

“Anyone can spread monkeypox [from] contact with body fluid or monkeypox sores or respiratory droplets when close to someone,” Brooks said.

The virus typically incubates for seven to 14 days before symptoms appear, according to the CDC.
Initial symptoms include swollen lymph nodes, headache, fever, muscle aches and fatigue. The disease then progresses into a rash and lesions that blister and scab over. This can happen all over the body. The illness usually lasts two to four weeks.
A person can be contagious from one day before the rash appears until up to 21 days after symptoms began. Once the scabs fall off, the person is no longer contagious, the CDC says.

The risk to the general public from this outbreak is low, according to the CDC.

“I don’t think that there’s a great risk to the general community from monkeypox right now in the United States. I think that we need to pay close attention to the communities in which this might be circulating so that we can communicate effectively with them and help bring this outbreak under control,” McQuiston said.

Monkeypox doesn’t seem to be spreading so quickly that parties or events needed to be canceled to stop the spread.

“This is not Covid,” McQuiston said. “Respiratory spread is not the predominant worry. It is contact, and intimate contact, in the current outbreak setting and population. And that’s really what we want to emphasize.”

It’s also important that this outbreak not cause stigma toward the LGBTQ community, according to the Joint United Nations Programme on HIV/AIDS. It warned that some reporting and commentary on monkeypox has used language and imagery that reinforce stereotypes and exacerbate stigma.

“Experience shows that stigmatizing rhetoric can quickly disable evidence-based response by stoking cycles of fear, driving people away from health services, impeding efforts to identify cases, and encouraging ineffective, punitive measures. We appreciate the LGBTI community for having led the way on raising awareness — and we reiterate that this disease can affect anyone,” UNAIDS Deputy Executive Director Matthew Kavanagh said in a statement Monday.

The WHO also cautioned people not to use the disease as a way to negatively label any particular community.

“There’s a lot of stigma and discrimination that surrounds many diseases, and I think the key thing we need to look out for is, as WHO, to work with our partners in communities and elsewhere to make sure that the messaging is correct. So while we are seeing some cases among men who have sex with men, this is not a gay disease,” WHO adviser Andy Seale said Monday.

There is no proven, safe treatment specifically for monkeypox, but a vaccine made by a Danish company called Bavarian Nordic has been approved by the US Food and Drug Administration. The US has signed a new contract with the company and placed a $119 million order, with the option to buy $180 million more if necessary.
The antiviral drug tecovirimat, sold under the brand name TPOXX, is included in the national stockpile and could be used for monkeypox, although there is no data on its effectiveness in humans. There’s also no data on human effectivenses for another possible treatment, vaccinia immune globulin (VIG).
Because the monkeypox virus is closely related to the smallpox virus, the smallpox vaccine can protect against monkeypox, according to the CDC. The Stragic National Stockpile has enough smallpox vaccine to protect everyone in the US, according to the CDC.

The US is in the process of responding to a request for the release of the Bavarian Nordic Jynneos monkeypox vaccine from the stockpile.

The CDC recommends that anyone with a new or unexplained rash get it checked by a medical professional. People who are infected should stay isolated at home, away from people and pets, should wear a surgical mask and should cover their lesions as much as possible until they have healed. They should avoid close contact with children, people who are pregnant and those who have weakened immune systems because these groups are at higher risk of complications if they catch the virus.

Share. Facebook Twitter Pinterest LinkedIn Tumblr WhatsApp Email
Previous ArticleAmazon is taking up to 60 percent off WD and SanDisk storage for today only
Next Article How airline ticket scalpers took over the Chinese market