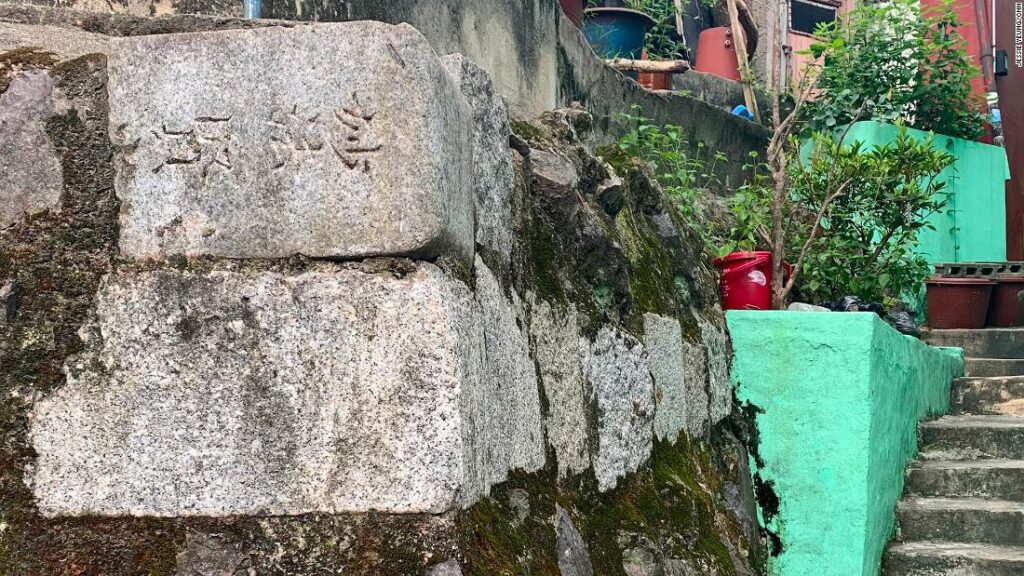 
Editor’s Note — Monthly Ticket is a CNN Travel series that spotlights some of the most fascinating topics in the travel world. In October, we shift our focus to the offbeat, highlighting everything from (allegedly) haunted spaces to abandoned places.

Busan, South Korea (CNN) — At first glance, Ami-dong seems like an ordinary village within the South Korean city of Busan, with colorful houses and narrow alleys set against looming mountains.

Ami-dong, also called the Tombstone Cultural Village, was built during the depths of the Korean War, which broke out in 1950 after North Korea invaded the South.

The conflict displaced massive numbers of people across the Korean Peninsula — including more than 640,000 North Koreans crossing the 38th parallel dividing the two countries, according to some estimates.

Within South Korea, many citizens also fled to the country’s south, away from Seoul and the front lines.

A tombstone displayed outside a house in Ami-dong, Busan, South Korea, on August 20.

Many of these refugees headed for Busan, on South Korea’s southeast coast — one of the only two cities never captured by North Korea during the war, the other being Daegu located 88 kilometers (55 miles) away.

Busan became a temporary wartime capital, with UN forces building a perimeter around the city. Its relative security — and its reputation as a rare holdout against the North’s army — made Busan an “enormous city of refugees and the last bastion of national power,” according to the city’s official website.

But new arrivals found themselves with a problem: finding somewhere to live. Space and resources were scarce with Busan stretched to its limits to accommodate the influx.

Some found their answer in Ami-dong, a crematorium and cemetery that lay at the foot of Busan’s rolling mountains, built during Japan’s occupation of Korea from 1910 to 1945. That period of colonial rule — and Japan’s use of sex slaves in wartime brothels — is one of the main historical factors behind the two countries’ bitter relationship to this day.
During that colonial period, Busan’s livable flatland and downtown areas by the sea ports were developed as Japanese territory, according to an article on the city government’s official visitor’s guide. Meanwhile, poorer laborers settled further inland, by the mountains — where the Ami-dong cemetery once housed the ashes of the Japanese dead.
The tombstones bore the names, birthdays and dates of death of the deceased, engraved in Kanji, Hiragana, Katakana and other forms of Japanese script, according to a 2008 paper by Kim Jung-ha from the Korea Maritime University.
But the cemetery area was abandoned after Japanese occupation ended, according to the city’s visitor guide — and when refugees flooded in after the start of the Korean War, those tombs were dismantled and used to build a dense collection of huts, eventually creating a small “village” within what would become a sprawling metropolis.

Many of the tombstones are engraved with the names, birthdays and dates of death of the Japanese deceased.

“In an urgent situation, when there was no land, a cemetery was there and people seemed to have felt that they had to live there,” said Kong Yoon-kyung, a professor in urban engineering at Pusan National University.

Former refugees interviewed in Kim’s 2008 paper — many elderly at the time, recalling their childhood memories in Ami-dong — described tearing down cemetery walls and removing tombstones to use in construction, often throwing away ashes in the process. The area became a center of community and survival, as refugees tried to support their families by selling goods and services in Busan’s marketplaces, according to Kim.

An armistice signed on July 27, 1953, stopped the conflict between the two Koreas — but the war never officially ended because there was no peace treaty. Afterward, many of the refugees in Busan left to resettle elsewhere — but others stayed, with the city becoming a center of economic revival.

Busan looks very different today, as a thriving seaside holiday destination. In Ami-dong, many houses have been restored over the years, some bearing fresh coats of teal and light green paint.

But remnants of the past remain.

Walking through the village, tombstones can be spotted tucked under doorsteps and staircases, and on the corners of stone walls. Outside some homes, they’re used to prop up gas cylinders and flower pots. Though some still bear clear inscriptions, others have been weathered by time, the text no longer legible.

Many of the tombstones are no longer legible after decades in the open.

And the village’s complex history — at once a symbol of colonization, war and migration — looms in the imagination, too. Over the years, residents have reported sightings of what they believed were ghosts of the Japanese deceased, describing figures dressed in kimonos appearing and disappearing, Kim wrote.

He added that the folklore reflected popular belief that the souls of the dead are tied to the preservation of their ashes or remains, which had been disturbed in the village.

The Busan government has made efforts to preserve this part of its history, with Ami-dong now a tourist attraction next to the famous Gamcheon Culture Village, both accessible by bus and private vehicle.

An information center at the entrance of Ami-dong provides a brief introduction, as well as a map of where to find the most prominent tombstones sites. Some walls are painted with images of tombstones in a nod to the village’s roots — though several signs also ask visitors to be quiet and respectful, given the number of residents still living in the area.

As you leave the village, a sign on the main road reads: “There is a plan to build (a) memorial place in the future after collecting the tombstones scattered all over the place.”