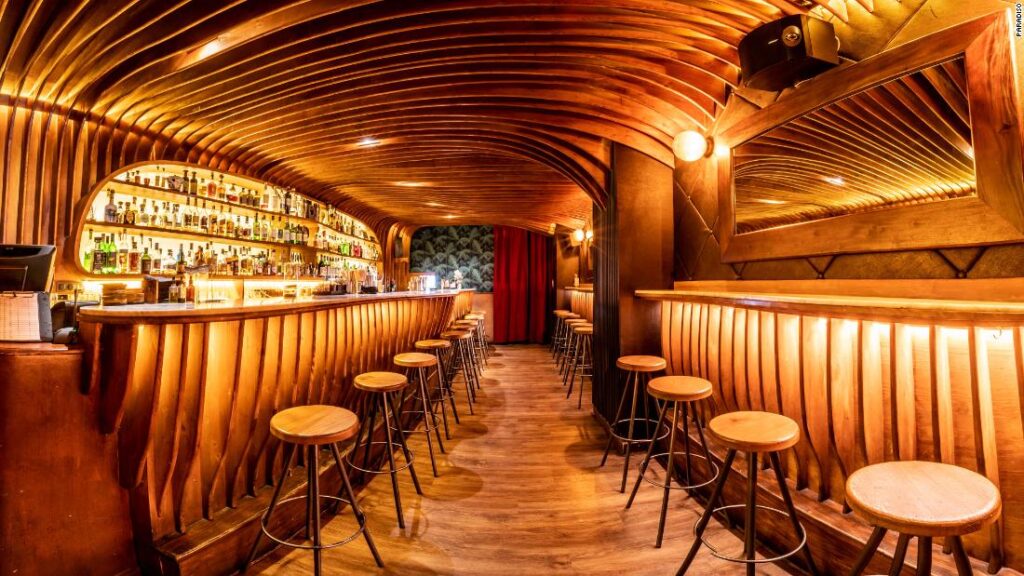 For the first time since the World’s 50 Best Bars list was created in 2009, a bar outside of New York or London earned the No. 1 spot on the list.

Paradiso, from owners Giacomo Giannotti and Margarita Sader, is a Mediterranean-style speakeasy, entered through the freezer door of a pastrami bar in Barcelona’s trendy El Born district. The bar moved up from No. 3 in 2021.

“It’s a big honor to win and a big responsibility. We will work hard to live up to being the best and stick to our principles. Our cocktails try to push creativity,” Giannotti told 50 Best on Tuesday evening.

“But it comes down to hard work. The more you work, the more you discover and the more creative you can be. We will celebrate and then go back to the bar to do what we do.”

The 50 Best winners were announced Tuesday evening in Barcelona, the first time the ceremony has been held outside of London.

Three bars in the lively city of Barcelona were in this year’s top 10 on the World’s 50 Best Bars list.

Italy also made a strong showing in 2022’s top 50, with bars in Rome, Florence, Milan and Naples all making the list. Newcomer L’Antiquario Napoli earned the No. 46 spot, putting the southern city of Naples into the top 50 for the first time.

Florence also made its first appearance on the list as did Portugal’s capital city, Lisbon.

While London was toppled from the top spot, the city is still one of the world’s premier cocktail destinations. Five London bars made the list, including The Connaught Bar, which dropped from its No. 1 ranking for two consecutive years, to No. 8 in 2022.

London’s Tayēr + Elementary, which awards ceremony host Mark Sansom said is “one of the most original bars on the planet,” held onto its No. 2 spot from 2021.

Europe dominated with more top bars than any other region.

The list is the result of votes from 650 bartenders and bar owners, drinks writers and cocktail experts.

New York rebounded from a less dazzling showing than usual in 2021 to become the city with the most highly ranked bars on the 2022 list. New York is home to six top 50 bars, including Double Chicken Please at No. 6 and Katana Kitten at No. 9.

Double Chicken Please won the Highest New Entry award for its strong debut. Sansom, who is content director of The World’s 50 Best Bars, told CNN Travel the bar has “an almost Michelin-grade kitchen,” one example of a growing emphasis on food programs at the world’s leading bars.

Mexico City is another North American cocktail capital with four bars in the top 50, including No. 4 Licorería Limantour, winner of the Best Bar in North America award.

Cartagena’s Alquímico is the Best Bar in South America at No.10. There are three bars in Buenos Aires on the list as well as one in Lima.

In Asia, Singapore, Bangkok and Hong Kong all had two bars in the top 50. At No. 12, Jigger & Pony in Singapore won the Best Bar in Asia award.

Dubai had three bars in the top 50, including including No. 38 Zuma, the Best Bar in the Middle East and Africa winner for the third year in a row.

The Best Bar in Australasia is Maybe Sammy in Sydney at No. 29.

Double Chicken Please in New York was No. 6 in its first year on the list.

What visitors will find in bars right now

With barhopping curbed by the pandemic, customers are more likely to linger in one place, Sansom said, and bars are offering more live entertainment in addition to upping their food programs to keep guests occupied for hours.

And the lines between food and drink are blurring.

Two Schmucks in Barcelona is also leaning on flavors associated with food.

“Its Curry Colada is one of the best cocktails I think I’ve ever drunk,” Sansom said.

Tools such as the centrifuge that made their way from science labs to restaurant kitchens in the past few decades have also appeared in craft cocktail bars in the past decade, he said.

And custom glassware that sometimes inspires the drink rather than the other way around is increasingly important at many bars, including at world’s best bar Paradiso.

After the past couple of years, great hospitality is more important than ever, Sansom said.

“Post-pandemic, bars are a lot more aware of the value of each individual customer and making them feel wanted, safe, secure as they go into those environments.”

Top image: Paradiso in Barcelona is the No. 1 bar on the World’s 50 Best Bars list in 2022 and the Best Bar in Europe winner.