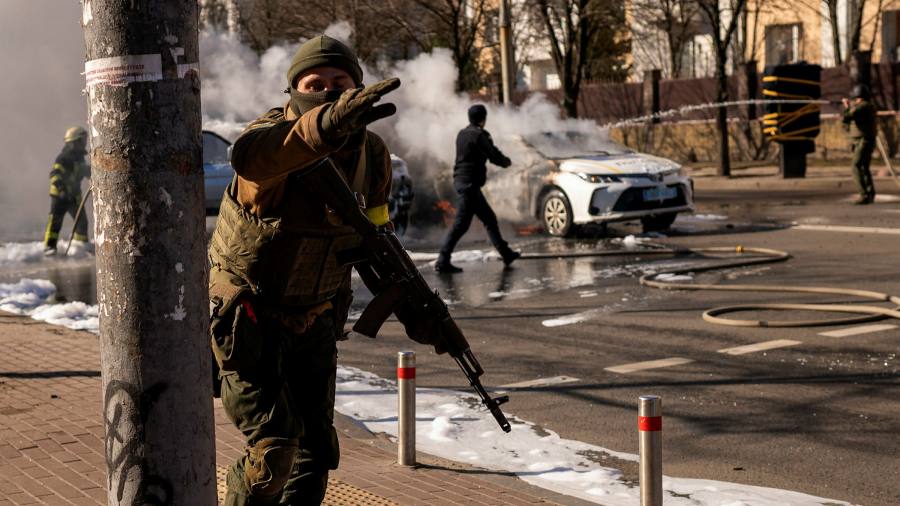 
The US and western allies will place sanctions on the Russian central bank and remove some of the country’s lenders from the Swift global payments system, in their harshest response yet to the invasion of Ukraine.

In a joint statement, the US, UK, Canada, France, Germany, Italy and the European Commission said they would prevent the Russian central bank from using its internal reserves to undermine broader sanctions.

“[Vladimir] Putin’s government is getting kicked off the international financial system,” said a senior US official, who added that the measures would result in the Russian currency going “into freefall”.

The leaders said they would eject some Russian banks from Swift, ensuring they are “disconnected from the international financial system” and harming their ability to operate. They also vowed to crack down on “golden passports” that let wealthy Russians buy citizenship, and to impose sanctions on officials and elites close to the government.

The move came as Russian troops appeared to make some headway on the fourth day of Putin’s invasion of Ukraine. With battles raging across Ukraine, a Russian column entered Kharkiv, Ukraine’s second-largest city in the east of the country, for the first time after days of bitter fighting.

“The enemy’s light vehicles broke into the city of Kharkiv, including the central part of the city,” said Oleg Synegubov, head of the military-civil administration in the region, adding that Ukraine’s military was “eliminating the enemy”.

Russia’s army also gained ground in the country’s south, with troops rolling in from the Crimean peninsula that Moscow occupied in 2014. But in Kyiv, the capital, Russian forces faced strong resistance and failed for a fourth day to make significant incursions into a city that is locked down under martial law.

Ukraine’s president Volodymyr Zelensky invited foreign combatants to join the country’s armed forces to help repel the invasion and “save Europe and its values”.

“Anyone who wants to join the defence of Ukraine, Europe and the world can come and fight side by side with the Ukrainians against the Russian war criminals,” his office said in a statement on Sunday.

The joint action on sanctions on is an escalation in the west’s response to Russia’s invasion. “We will hold Russia to account and collectively ensure that this war is a strategic failure for Putin,” the leaders said in their joint statement.

The Biden administration official said Putin had turned Russia into a “global economic and financial pariah”.

“What we are committing to do here is to disarm the central bank,” the official said, adding that the action would affect all of the institution’s roughly $630bn in foreign reserves.

“Without being able to buy the rouble from western financial institutions . . . Putin’s central bank will lose the ability to offset the impact of our sanctions,” he said. “The rouble will fall even further, inflation will spike and the central bank will be left defenceless.”

European Commission president Ursula von der Leyen said she would propose to EU leaders that they should “paralyse the assets of Russia’s central bank” in order to freeze its transactions and make it impossible for it to liquidate its assets.

Josh Lipsky, director of the Atlantic Council’s Geoeconomics Center who previously worked at the IMF, said before the announcement that hitting the central bank would be an “extraordinarily significant and damaging move” to Russia’s economy.

Edward Fishman, a former US official now at the Center for a New American Security, said it could present a “devastating blow” to the Russian economy that would eclipse the significance of a ban on Swift. The US has only previously sanctioned the central banks of Iran, Venezuela and North Korea.

A US official declined to say if Washington would sanction the central bank by adding it to the Treasury’s “Specially Designated Nationals” list, which Fishman described as “the single most impactful sanction that you could apply to Russia, and you could do it with a stroke of the pen”.

“It would render a sizeable chunk of their foreign exchange reserves unusable overnight,” Fishman said.

The move would ban US entities from dealing with the central bank, which would mean that everyone would be “skittish about moving any assets on behalf of the Russian central bank”, he said.

The joint statement did not list the banks that will be ejected from the Swift messaging system.

Zelensky had pleaded with Western capitals to use access to Swift to pressure Russia. Cutting banks out of Swift will make it more difficult for Russians to make cross-border transactions.

Swift said on Saturday that it was “engaging with European authorities to understand the details of the entities that will be subject to the new measures, and . . . preparing to comply upon legal instruction”.

The enterprise has found itself in the spotlight during international crises, most notably over Iran’s nuclear programme. In 2012 and 2018, it was pushed to shut out Iranian banks targeted by sanctions. The US official said the new move against Russia was the “Iran model”.

The goal will be to avoid undermining mechanisms for western economies to purchase energy from Russia.

The allies have not finalised the details, but will either carve out certain energy-focused banks or use product definitions within the Swift system to permit energy-related transactions.