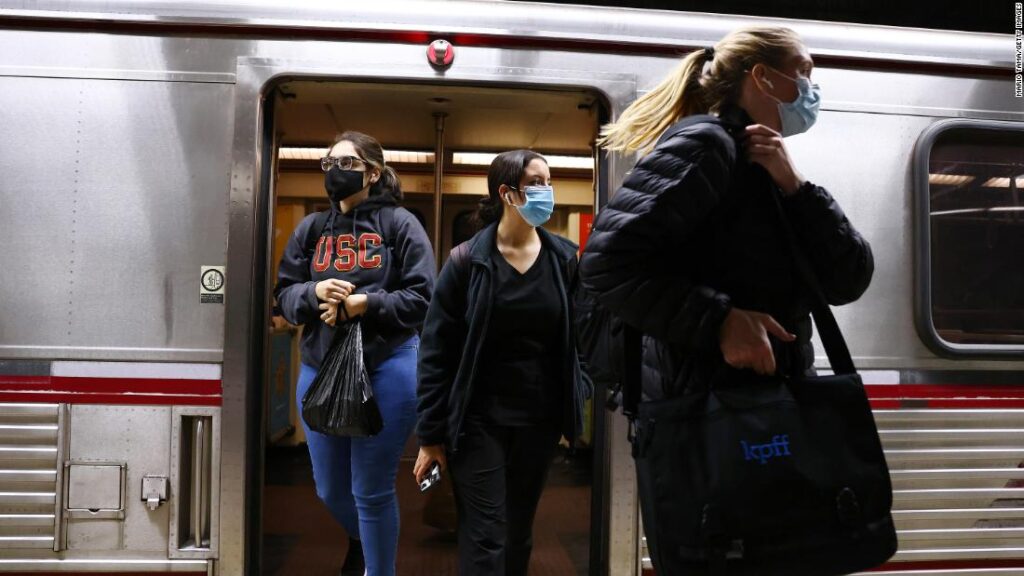 Someone infected with Covid-19 releases aerosols that contain the coronavirus when they talk, laugh or simply exhale. If the person isn’t wearing a mask to block those aerosols, they can hang in the air and be inhaled by other people nearby.

Outdoors, viral particles may disperse with even a light wind. But indoors, where there is no wind, particles tend to concentrate and hang around. Good ventilation can help break up the concentration of viral particles, but it can’t do everything.

“Ventilation is great, but we know if we are outside, the risks are lower. Being able to re-create the same amount of airflow that you would have with just your natural wind patterns in a confined indoor space that’s heavily occupied is incredibly hard to do,” Pollitt said. “Outside of putting yourself into, say, a wind tunnel, which obviously wouldn’t be comfortable for many reasons or energy-wise, we have to think about what’s realistic.”

How ventilation works on public transit

On public transportation of any kind, a heating, ventilation and air-conditioning system sucks in air from outside, treats it and pushes it into the cabin or car. It’s a closed-loop system that can pull a little bit of fresh air.

A bus or subway car can have 10 to 18 air exchanges per hour on the low side, according to Jim Aloisi, a former Massachusetts secretary of transportation who is now a lecturer on transportation policy planning at MIT’s Department of Urban Studies and Planning; on the high side, it might have 40 to 50.

“Everything depends on the age of the equipment,” Aloisi said. Older systems are not as efficient as newer ones.

Ventilated air that is well-mixed has good circulation and is relatively safe, said Varghese Mathai, an assistant professor in the Department of Physics at the University of Massachusetts-Amherst who has done studies on how the coronavirus spreads in an environment.

But when ventilation is not as good, the air is not so well-mixed, and there can be zones inside a room with a higher concentration of particles.

“One can’t really predict where these zones are not well-mixed in a room. Really, it’s a multidimensional problem, and it’s not easy to predict in a not-so-well-mixed room how safe it is to stay for an extended duration of time,” Mathai said.

And if the transportation system wants maximum efficiency to cool or heat the air in a cabin, it can shut off the air intake and use what’s already inside, explained Aly Tawfik, director of the Fresno State Transportation Institute and an associate professor in the Department of Civil and Geomatics Engineering at California State University, Fresno.

“Buses have filters, just like the ones inside our vehicles,” Tawfik said. “But they are not designed for viruses like the coronavirus or the flu virus.”

In May 2020, Tawfik and his team did an experiment to see how a virus could spread through buses with a typical ventilation system.

Using nontoxic colored candles and steam, they simulated how air flowed in a variety of buses. They found that HVAC systems are extremely efficient and hold cool or the warm air inside a bus a lot longer than some may expect.

When the team introduced smoke, they saw that it spread in seconds and filled the whole cabin. Even when they opened the doors and introduced fresh air into the HVAC systems, the smoke lingered for minutes. The researchers think the virus behaves like the smoke did and could linger even after an infected person has left a bus.

“These were unpleasant findings, because it means that opening the doors and windows doesn’t help much,” Tawfik said. “The systems were designed to treat air fast and keep it inside the cabin for a long period of time.”

With another experiment, the team tried to see if they could treat the air to make it safer. They tested the buses with three viruses that were similar to the coronavirus.

Cooling the air mitigated an average of about 80% of the viruses, and heating was at about 90%.

“That does not necessarily mean that it’s safe, because this 10% is still millions of viruses,” Tawfik said. For one thing, it’s not clear how much of the virus virus it takes to infect someone.

Northern California’s BART system and New York’s Metro system are among those that have introduced some of these technologies during the pandemic.

People can catch Covid-19 on planes, especially when an infected person isn’t wearing a mask, studies have shown, but a plane’s air system is much stronger than one on a bus or train.

Airplanes use HEPA filters that can capture about 99% of particles in the air. They also have better air circulation when flying. Air is typically fed in through the top of the cabin, extracted by floor vents, fed through those filters and eventually sent back into the cabin.

Planes bring in air in a top-to-bottom direction about 20 to 30 times per hour, creating a 50-50 mix of outside and recirculated air and reducing the potential spread of the virus. So the risk of getting sick is low, the experts say.

However, people are usually on planes a lot longer than they may be on a subway or on a bus, and more time in a crowded plane can increase someone’s exposure.

When a plane is parked, it does not have that superior circulation.

“Airplane systems are a little similar to bus systems when they are on the ground,” Tawfik said. That’s why you’ll notice the temperature isn’t as well-regulated then, and it’s also when there isn’t the same amount of fresh air circulating. It’s then dealing with the same challenges.”

Uber and Lyft have dropped their mask mandates, and many taxi companies have stopped requiring masks.

Infection in a car is certainly possible, studies show.

You can always wear a mask, and some experts suggest opening car windows and keeping talk to a minimum. Keep in mind that shorter rides are also better than longer ones.

What else can be done to make public transportation safer?

Aloisi said there are things that transportation systems could do to mitigate some of the risk. Trains and buses could run more often so there aren’t as many people on board, for instance.

He says it could help to require people to show proof of vaccination if they want to get on a train or plane. That probably wouldn’t work with subways or buses, though, nor would it fly politically.

Aloisi thinks public transportation has been unfairly stigmatized. “If you’re not up in arms about people being unmasked in the grocery store, you should chill out about public transit,” he said.

Even before masks were mandatory on public transportation, studies have found, mass transit systems don’t seem to be major drivers of viral spread.

And although it’s not mandatory, the US Centers for Disease Control and Prevention still recommends that people wear masks in indoor public transportation settings.

“When you spend significant duration indoors, you obviously inhale, and if you have co-occupants who are potentially infected, you can inhale these tiny droplets that can get you sick,” Mathai said.

Ventilation absolutely helps, he said, but protecting yourself can take multiple tools of mitigation. “Masks really reduce the momentum of these released aerosol droplets.”

A mask can even protect you when others aren’t wearing them.

“Just wearing a mask is a such a simple solution to increasing the level of safety,” Pollitt said. “Putting one on, it’s an easy thing to do.”