A mother-of-three has gone viral with her incredible weight loss – leaving TikTok shocked and users questioning if she’s the same person.

Natasha Pehrson, 33, from Arizona, weighed 232lbs after piling on the pounds during her third pregnancy.

The influencer, who shares seven-year-old Gretchen, five-year-old Ralph and one-year-old Claire with her husband David, struggled to exercise after her third baby was born, and found the only foods she could eat were carbs.

‘I had a very hard pregnancy and couldn’t exercise during the end. I was also very sick and the only foods I could really keep down were carb,’ she explained

Natasha now weighs an amazing 135.8lbs and believes her weigh loss was also down to drinking a gallon of water every day 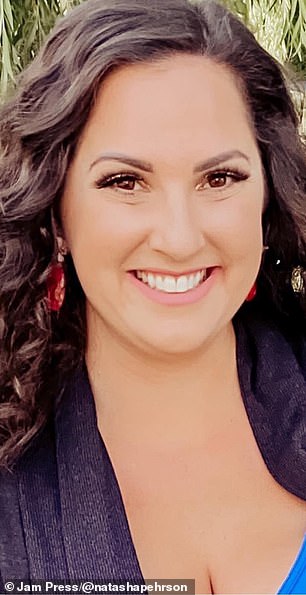 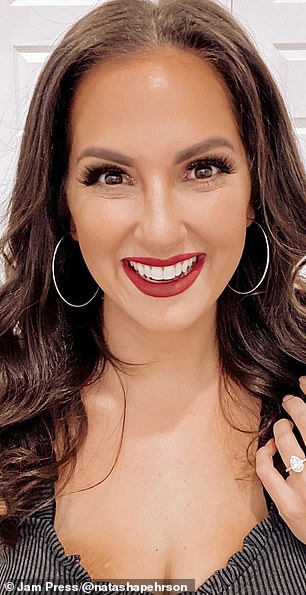 Before and after: Natasha looks so different after her transformation that the shape of her face has changed, and TikTok fans have questioned if she’s the same person

So she decided to try something new and saw a hormone specialist who put her on supplements to help regulate her hormones.

The practitioner also tested her food sensitivities which found her body reacted badly to gluten, dairy and soy.

Natasha decided to ‘fully commit’ and eliminated all the foods from her diet that didn’t agree with her, including giving up cheese, which she particularly loved.

She also kept an eye on portion sizes to help her slim down and in eight months she lost 74lbs, without ever needing to calorie count.

‘I’ve lost weight without counting calories. I follow a plating method so I don’t have to count calories. I eat tons of veggies,’ she said. 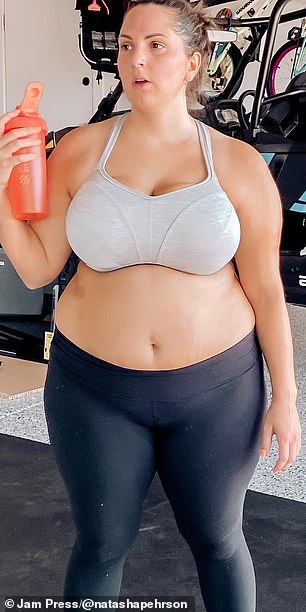 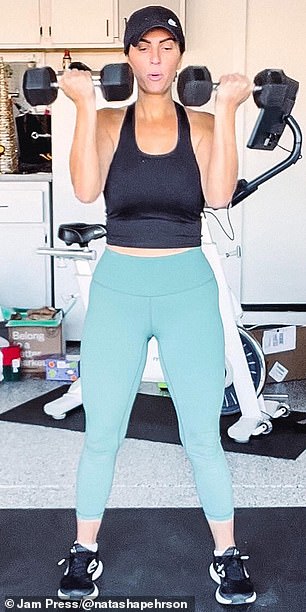 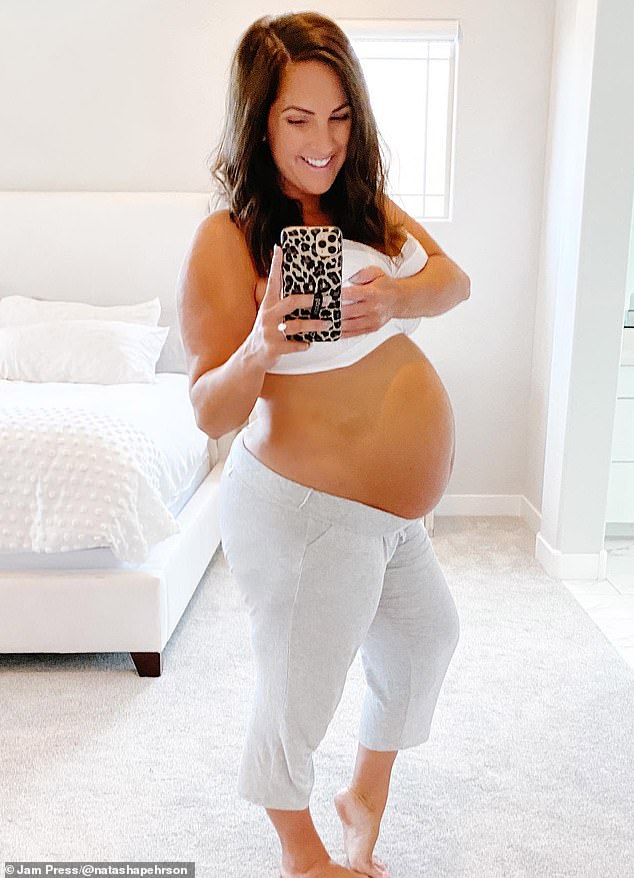 The TikTok influencer during her third pregnancy with her daughter Claire. After giving birth, she struggled to lose the weight and only wanted to eat carbs

The mother of three lost an amazing 74lbs and now looks and feels fabulous. Here she is with her third child Claire, just after her birth (left) and now (right)

And now she’s slowly started to reintroduce dairy and gluten back into her diet while still keeping an eye on her intolerances.

Natasha now weighs an amazing 135.8lbs and believes her weigh loss was also down to drinking a gallon of water every day, which she says has also transformed her skin.

She gives tips on drinking enough water daily, which include attaching a water bottle to something you do every day. ‘Every time I go to the toilet, I drink water,’ she said. ‘They’re not connected in my brain.’

Natasha also mentions some of her favorite foods on her weight loss journey and she swears by small tubs of hummus with a bag of cocktail cucumbers or bell peppers, ‘whenever I feel hungry I grab these’ she added.

She also swears by a good brand of gluten-free pasta, revealing that Banza – which offers a range of pastas made with chickpeas – is her favorite, explaining that she keeps an array of varieties in her store cupboard.

She shared a clip on TikTok showing herself trying to squeeze into a pair of tiny denim shorts at her heaviest and then showing herself in the shorts today, and it’s had 5.1m views

Earning her stripes! The TikTok influencer shows off her weight loss success in a  pink and white bikini, after halving her size

She has shared her impressive transformation on social media. And in a clip posted on TikTok, Natasha shows herself trying to squeeze into a pair of tiny denim shorts at her heaviest.

And then we magically see her half the size, comfortably fitting into the flattering shorts. The post was viewed 5.3 million times and racked up over 880,000 likes.

One person commented: ‘Why do I never believe these are the same people… I guess I have trust issues.’

‘Not the same women y’all be fooling,’ another user insisted. [sic] 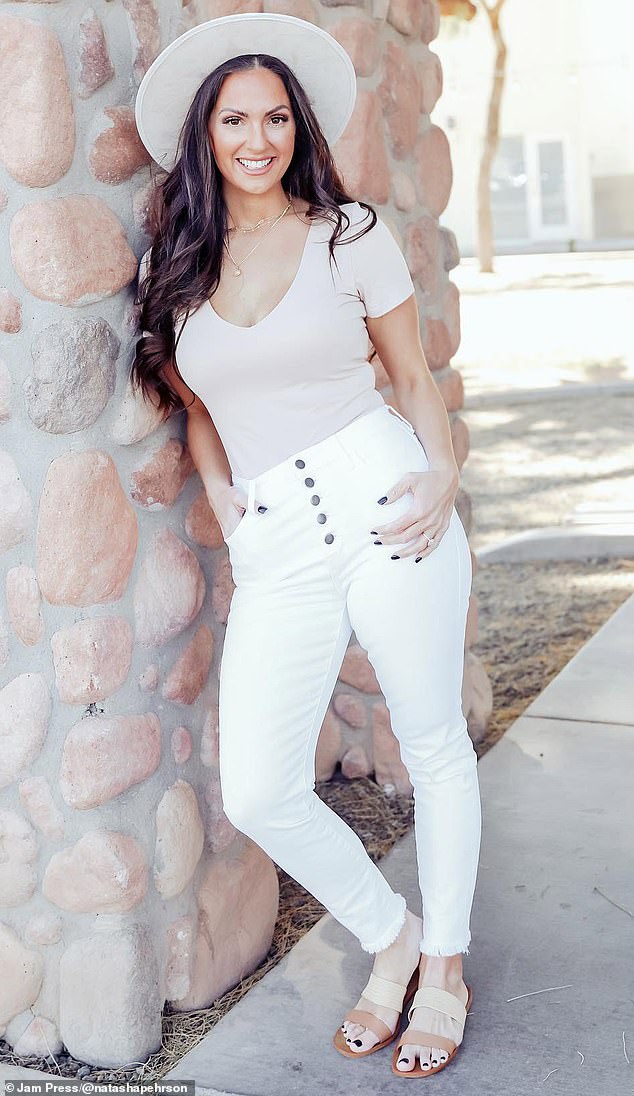 Natahsa went to see a hormone specialist and eliminated certain foods from her diet to lose weight, such as dairy 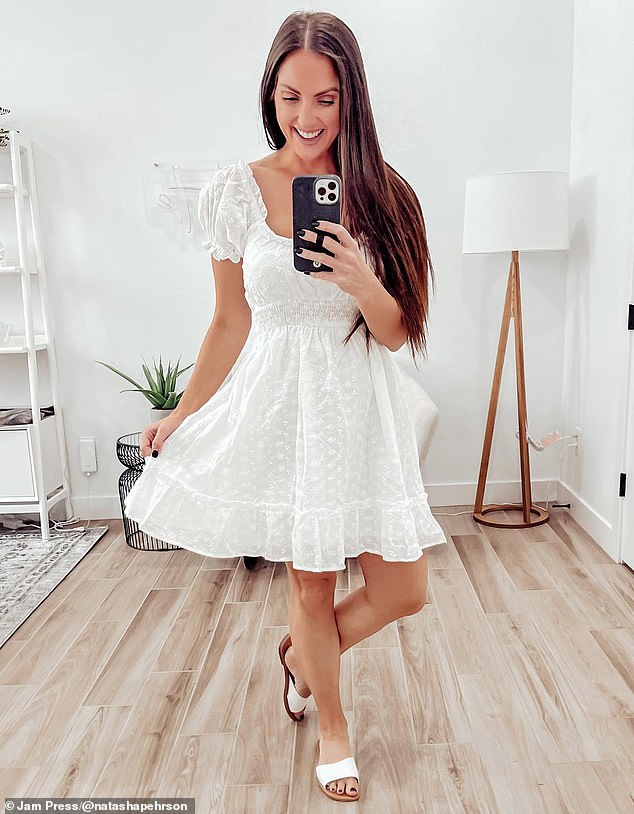 Natasha now regularly shows off her trim figure on social media, showcasing her different outfits with followers on Instagram

Someone else added: ‘You can tell by the hair growth that this took a while, I’m amazed at how motivated you are.’

Another user commented: ‘This motivates me so much. You look amazing.’

‘Teach me,’ begged someone else.

In another video she shows a clip of herself at her child’s birthday last year and then cuts to a clip of her standing in the same spot today. It’s a huge difference.