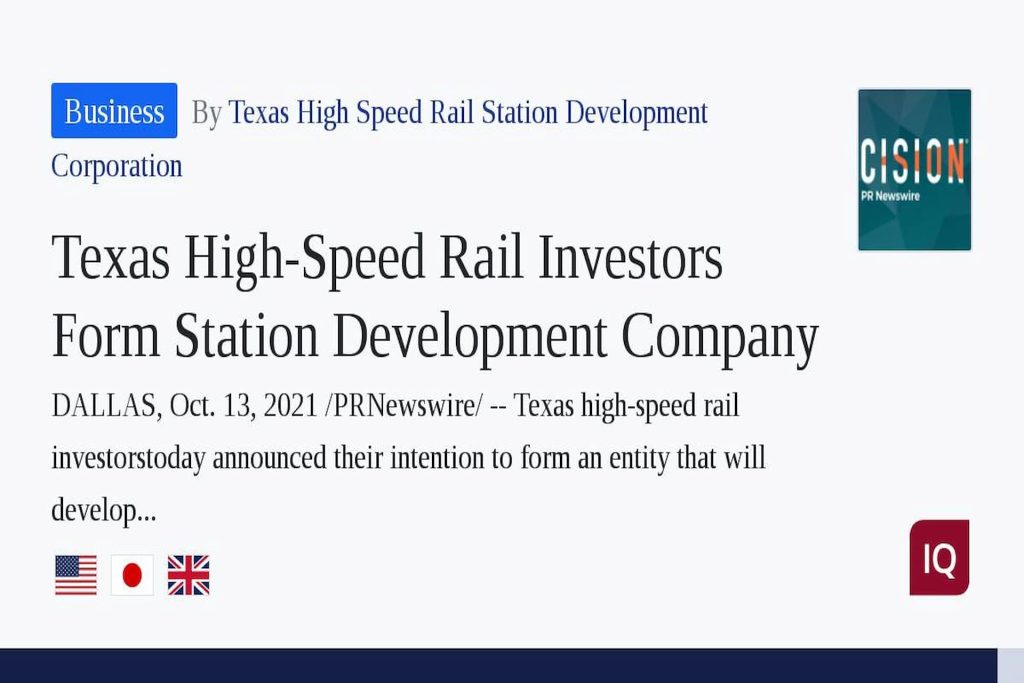 With approvals and permitting from the U.S. Department of Transportation’s Federal Railroad Administration (FRA) and State of Texas, terminal development is the next step.

Texas high-speed rail investors today announced their intention to form an entity that will develop train stations in Dallas, Houston and Grimes County near College Station, where the permitted high-speed rail line terminals will be located. The entity will be known as Texas High-Speed Rail Station Development Corporation, “SDC.” This entity is independently owned by a consortium of Texas investors and separate from Texas Central.

Cadiz Riverfront Holdings and Cadiz Development Houston LLC will form SDC and be led by John Kleinheinz and Jack Matthews. The group owns approximately 52 acres in the Cedars neighborhood just south of downtown Dallas; approximately 45 acres in Houston formerly known as the Northwest Mall and approximately 59 acres in Grimes County near College Station. The parcels of land owned by this group include the sites of the future Texas high-speed rail stations, as approved by Federal and State authorities and the surrounding developable acreage.

Very few investments move performance measures to this magnitude and across so many independent policy-focus areas. The all-electric, high-speed train will result in these projected benefits by 2050:

— Using less land: 28 times less land than a similar highway, 17
acres/mile vs. 468 acres/mile.
— Saving lives: 10 billion passengers without a single operational
accident or fatality in over 57 years vs. I-45, the highway with the
greatest number of fatalities per mile in America.
— Reducing CO2 emissions: 8 times less CO2 emissions per seat vs.
airplane.
— Reducing total greenhouse gases: 4.5 million tons by 2050 vs. current
air and car traffic.
— Reducing congestion: 86M cars removed from I-45, over 12,500/day, in
year one.

“Our high-speed rail project connecting Dallas and Houston will be as transformational to Texas as DFW Airport was to the region when it was opened in 1973,” said John Kleinheinz, investor. “Texas Central will be the blueprint for national high-speed rail, a solution for environmentally efficient transportation. As this first high-speed rail project comes online, Texas is positioned to lead in discussions about a national rail strategy with the local and federal stakeholders.”

“Texas Central is moving toward a consensus on how to finance their technology deployment along the Dallas/Houston corridor. The U.S. and Japanese governments have an excellent, long-term history of working together on strategic projects and we are optimistic they will reach a mutually beneficial understanding. These station assets will be an integral part of the system when financing for the Tokaido Shinkansen system is finalized. If a solution involving the Shinkansen system cannot be reached, our station sites will be used to make sure high-speed rail comes to Texas and integrates with the rest of the nation, using the best technology offered,” Kleinheinz continued.

“We have invested substantial time and energy to advance high-speed rail between Dallas and Houston and Grimes County near College Station, we do not intend on missing this opportunity for the people of Texas.” said Jack Matthews, developer and investor. “To keep this positive momentum, we will begin discussions with various third parties who have successful experience with high-speed rail.”