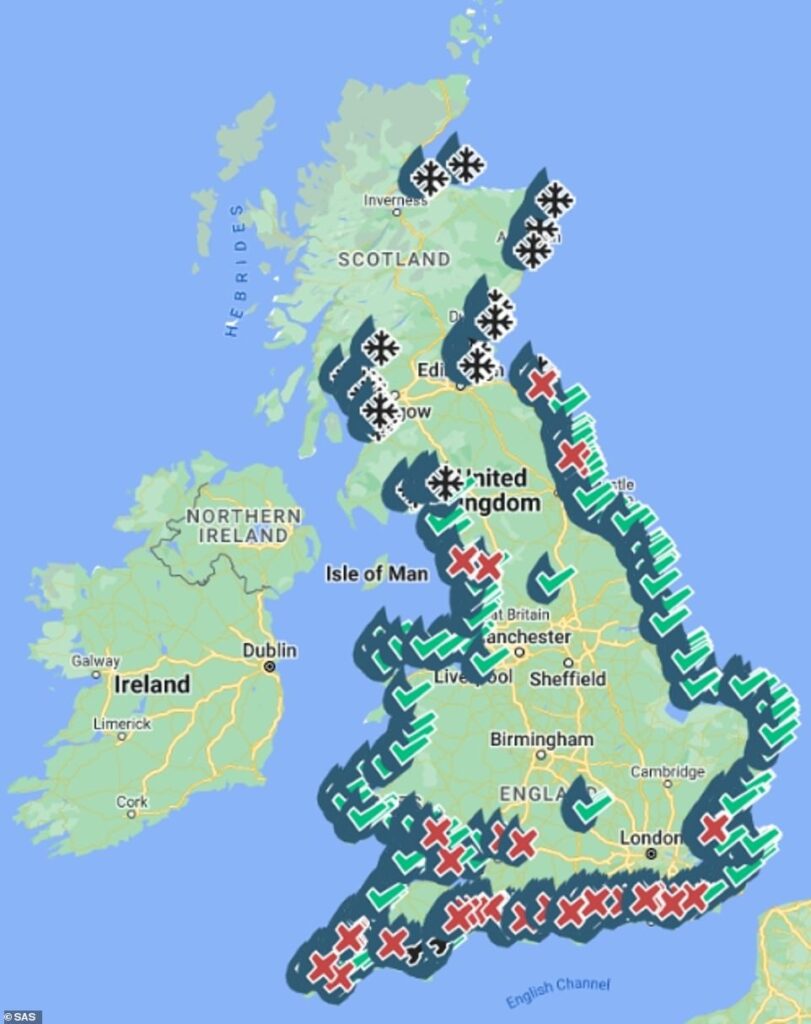 
Holidaymakers are being urged to avoid more than 50 dangerously-polluted beaches across England and Wales due to huge amounts of raw sewage being pumped into the sea by water companies.

According to data gathered by environmental campaign group Surfers Against Sewage (SAS), there has been storm sewage discharge into the waters at beaches in Cornwall, Devon, Sussex, Essex, Lancashire, Lincolnshire, Northumberland and Cumbria.

It comes as millions of Britons head to the coast for a last trip away before the end of the summer holidays at the end of this month, but now face the risk of serious illnesses if they swim at affected beaches.

Video footage online shows sewage being released into the open sea at Seaford in East Sussex. Dark grey water can be seen mingling with the rest of the pale blue ocean just feet away from the popular nearby beach.

Heavy rain in the last 48 hours has followed the UK’s most recent heatwave, causing sewer overflows which have been eased by emptying into UK waters after they struggled to cope with the high volumes of water placing pressure on drainage systems.

Southend-on-Sea and Newquay are particularly badly affected, each with four beaches closed for at least today. 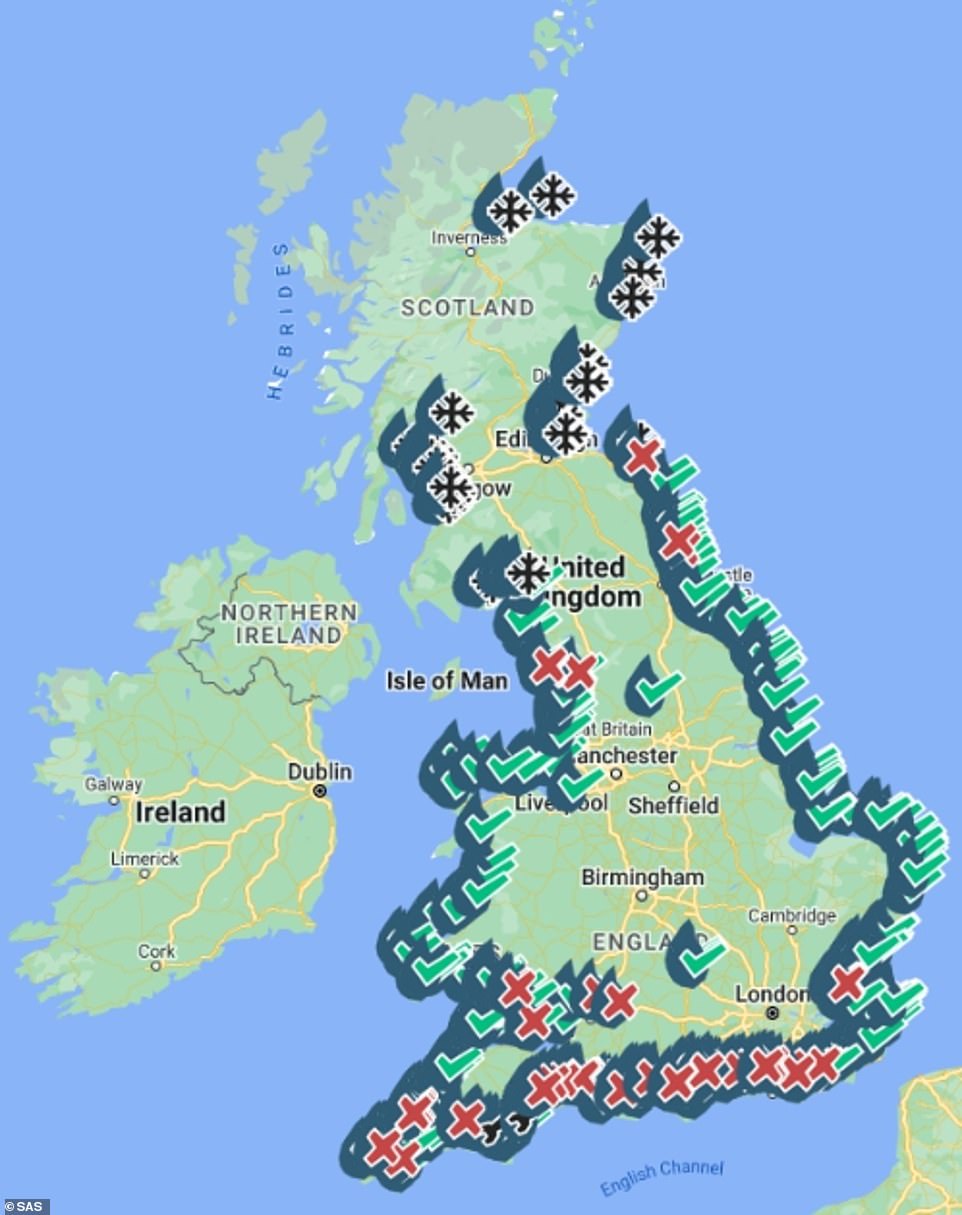 Environmental campaign group Surfers Against Sewage (SAS) keeps its own interactive map where surfers and other beach visitors can check the water quality of their local beach on a day to day basis. Ticks mean water quality is fine for water activities, while beaches with cross marks are to be avoided. Spanner and snowflake symbols mean water quality data is unavailable due to ongoing works or the beach being out of season 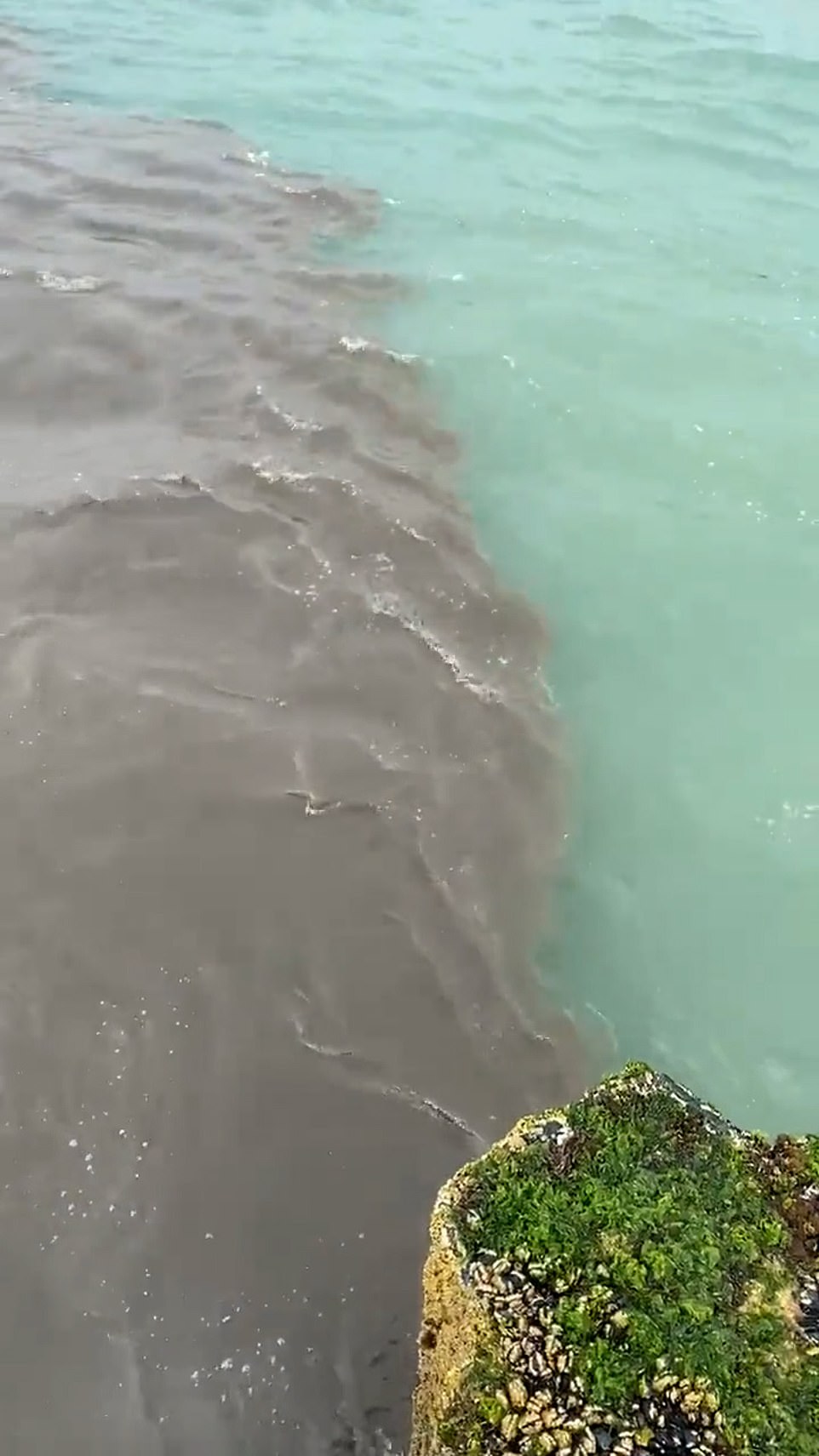 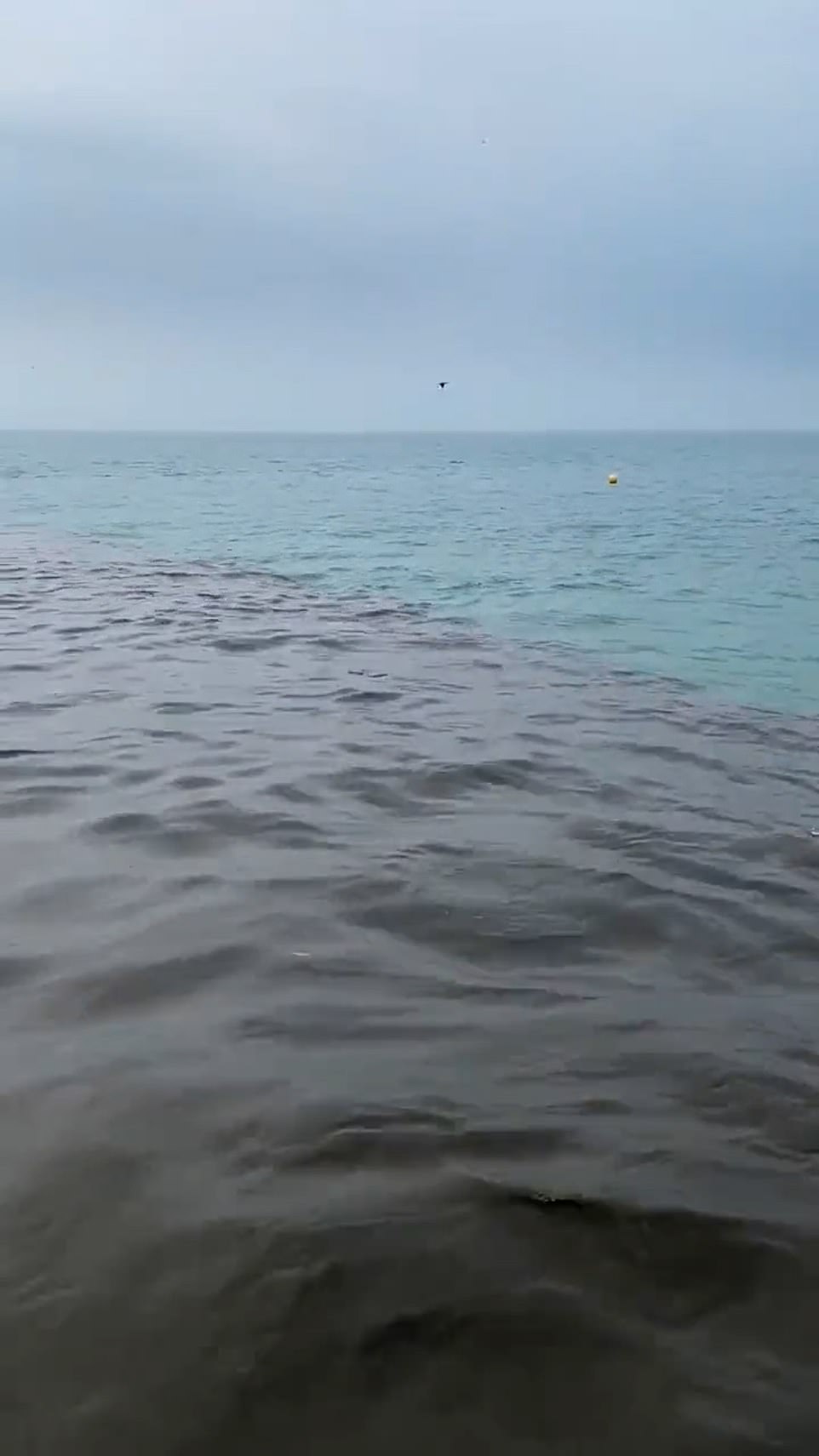 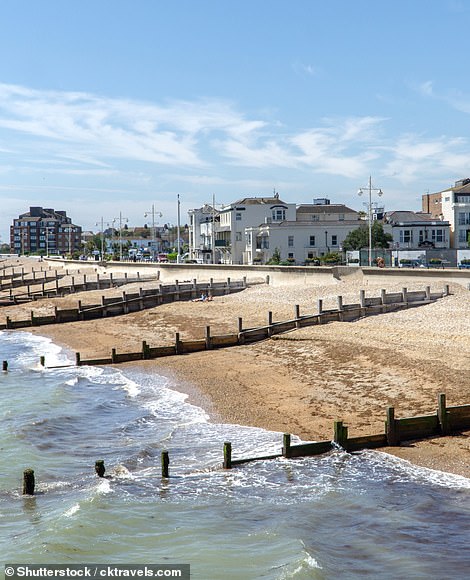 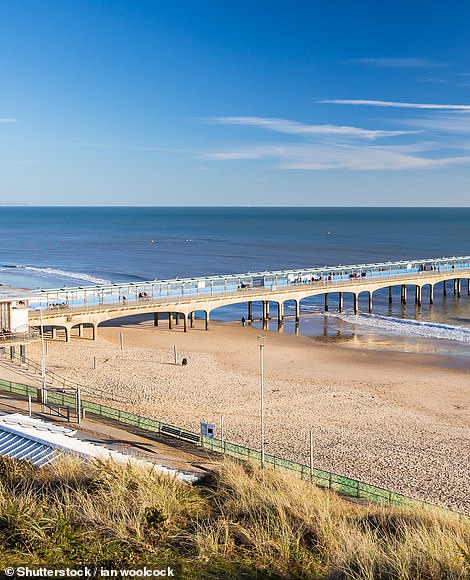 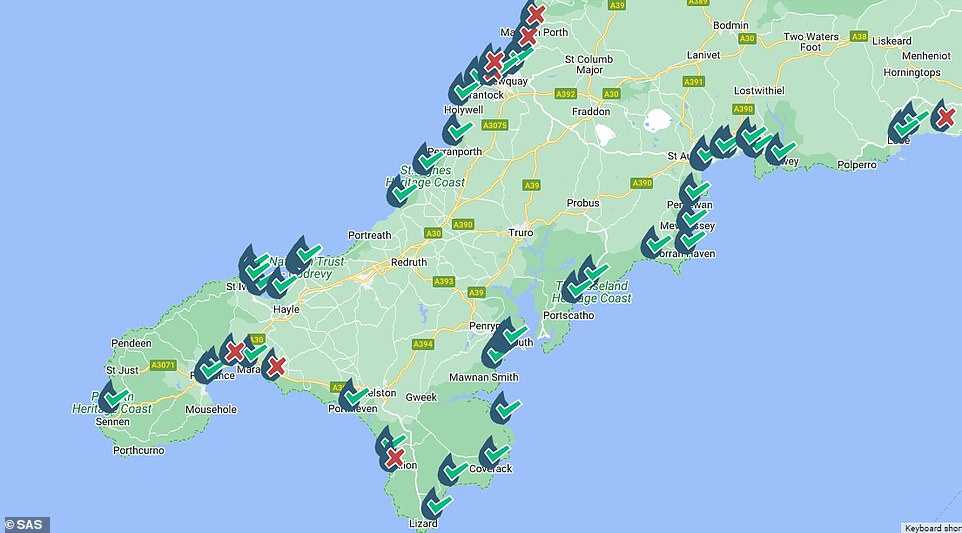 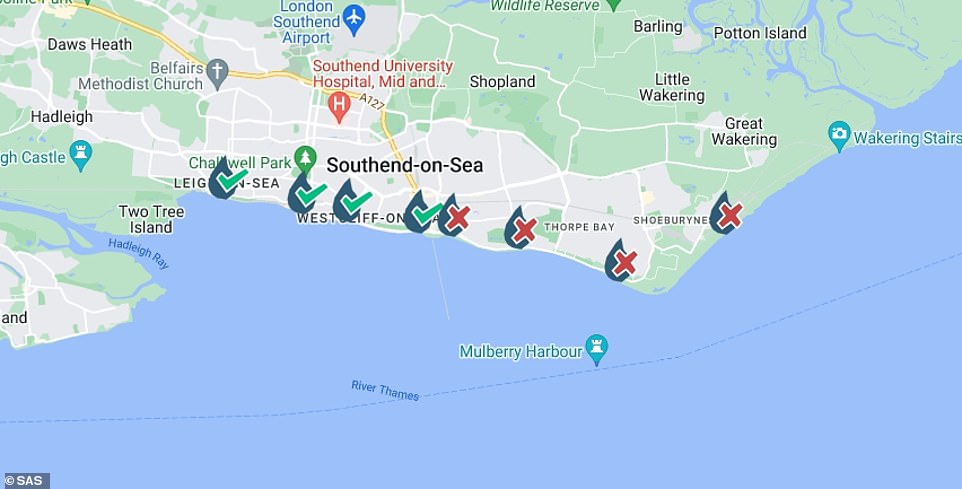 At some beaches sewage has been released directly into the sea but others which have seen sewage discharged into nearby rivers are also classed as polluted.

A spokeswoman for SAS said other pollution warnings in place may not be linked to heavy rain, and those visiting the coast are advised to check its interactive map on their website before they swim.

The most concentrated areas of pollution are across the south coast including Cornwall and Devon. Beaches on the Isle of Wight are also affected.

The Environment Agency has an interactive map where individuals can check the water quality at their local beach, and it lists advice for eight of the 50 beaches warning bathing is not advised on a permanent basis.

With millions of people expected to head to the coast this week, the SAS is urging people to not assume their local beach is safe.

Usually highly popular seaside destinations including Exmouth, Cowes, Eastbourne, Bournemouth and The Headland Cornwall beaches are all deemed as unsafe for the moment.

Pollution levels at many beaches in Scotland are currently unavailable due to them being classed as out of season.

The SAS and other environmental groups have been campaigning for water companies to be prevented from allowing sewage to be released into the UK’s oceans for several years.

It comes after MPs voted against an amendment to a bill which would have prevented companies from dumping raw sewage into UK rivers in October last year.

In 2020 there were more than 400,000 incidents of sewage being released by water companies in Britain.

Britain’s sewers struggle to cope in heavy rain, leaving sewage works overwhelmed – and, at this point, water firms are allowed to release rainwater and untreated sewage into rivers and the sea to stop waste backing up in streets and homes. However, environmentalists say better infrastructure such as storage tanks could prevent this.

Raw sewage is dangerously harmful to wildlife and the health of surfers and wild swimmers. It also poses a dangerous risk to anyone entering the sea in the aftermath of a sewage release.

Beach-lovers online have branded the sewage releases as ‘revolting’ and questioned why water companies are allowed to release it in this way.

The government’s water minister threatened to fine companies last week after it emerged that in addition to sewage releases, billions of gallons of water is being lost in leaks on a daily basis.

Steve Double insisted water firms needed to do more to ensure they can withstand future droughts.

‘Water companies must continue to invest more, including to prevent leakage and work faster to fix leaks,’ he told The Mail on Sunday.

‘We are losing somewhere between 15 to 20 per cent annually through leakage, which is not acceptable.

‘Progress has been made but my message to water companies is they need to prioritise customers, not shareholder returns. If we don’t see the progress we expect, we won’t hesitate to take further action.

‘The public and Government rightly expect more from our water companies.’

Swimmers have already reported contracting nasty bugs including gastroenteritis in British seas this summer – a prolific vomiting bug which can cause serious illness – which are being blamed on sewage releases.

A couple who came down with the bug blasted Southern Water after they swam at a beach where sewage had been released just 24 hours previously without their knowledge. The company apologised to the couple on social media. 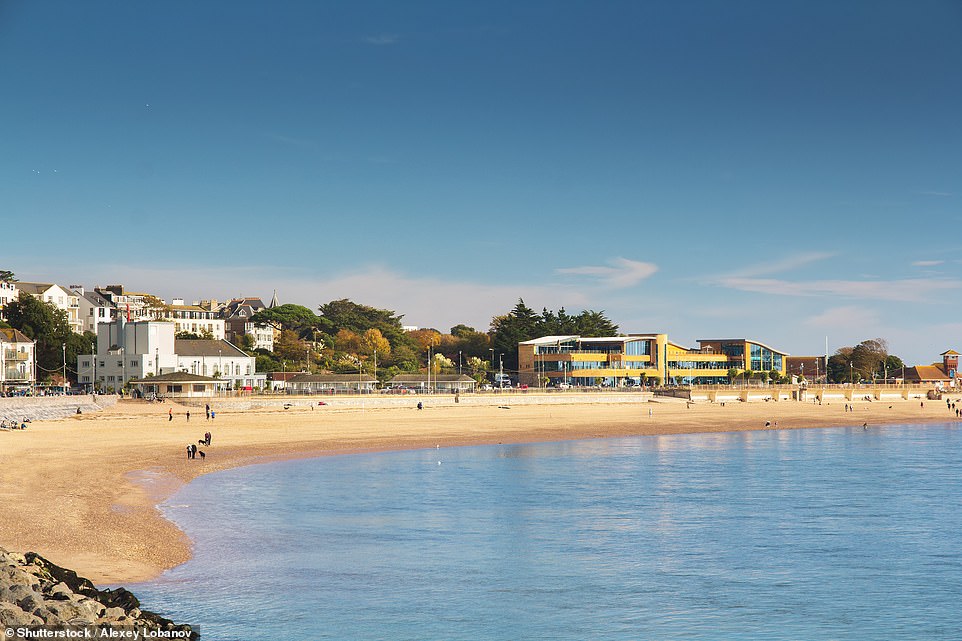 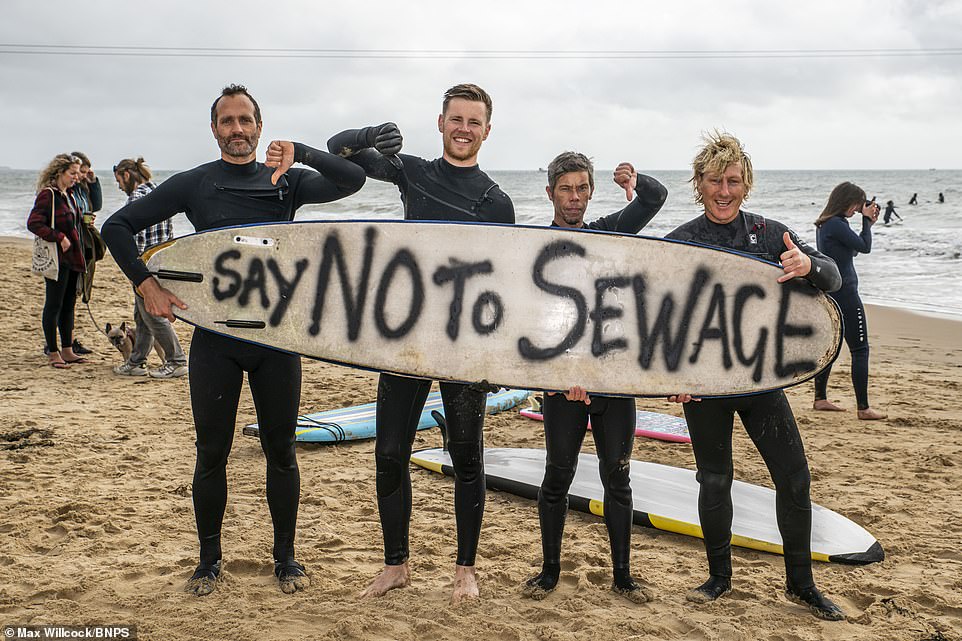 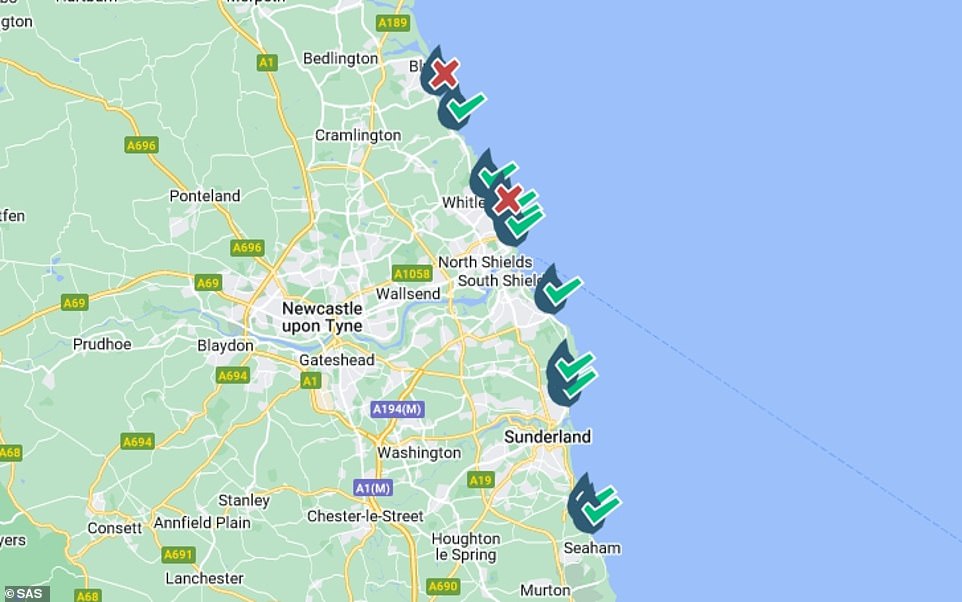 Southern Water was fined a record £90 million in July 2021 after bosses admitted deliberately dumping billions of litres of raw sewage illegally thousands of times over a five-year period into the sea.

The company pleaded guilty to 6,971 unpermitted sewage discharges from 17 places – the equivalent of one pipe leaking continuously for seven years.

Tons of sewage polluted rivers and coastal waters in Kent, Hampshire and Sussex between 2010 and 2015, a court was told.

The Environment Agency brought a criminal investigation after shellfish conservations were found to be contaminated with E. coli.

Passing sentence, the Honourable Mr Justice Johnson said, of the formal 51 guilty pleas, that the Southern Water’s behaviour had been ‘shocking’ and the offences had been ‘committed deliberately’ by the company’s board of directors at the time.

The issues come as millions of UK residents are currently living under hosepipe bans and in areas officially in drought.

Southern Water, South East Water, Welsh Water, Yorkshire Water and Thames Water have all announced hosepipe bans either now or in the coming weeks. South West Water and Severn Trent have all indicated they will also bring in restrictions.

Together, the bans cover more than 32 million people.

Despite the heavy rain seen across the UK over the last 48 hours, this will do little to help the drought-stricken countryside as it is prolonged rain that is needed rather than rare, heavy downpours. This is due to the dry ground becoming quickly saturated with water, meaning most of the downpour cannot be absorbed into the soil.

Instead this excess water goes into our drainage systems, creating the overflow problems which are leading to sewage release.

Experts warn that global warming will only lead to more extreme weather such as hotter temperatures and more frequent heatwaves, droughts and storms.

What are the current laws on water companies releasing sewage into rivers and the sea?

Britain’s sewer system, which is still largely Victorian, becomes unable to cope when there is too much rainwater, causing sewage works to become overwhelmed.

It is under these circumstances that water companies are permitted to release rainwater, and a smaller amount of untreated sewage, directly into rivers and the sea, to stop waste backing up in streets and homes.

But environmentalists say better infrastructure, like storage tanks at treatment works, or nature-based solutions like tree-planting, could better tackle the problem, which has become excessive.

The WWF has suggested that water companies are ‘relying on sewer overflows to compensate for under-capacity’.

Waste water is normally released to the environment following treatment, either out to sea through long sea outfalls or coastal discharges, or into rivers.

The proposed amendment to the Government’s Environment Bill had been inserted into the legislation by the House of Lords but MPs voted to remove it.

The amendment aimed to clean up rivers by placing a new duty on water companies to reduce raw sewage discharges into rivers. 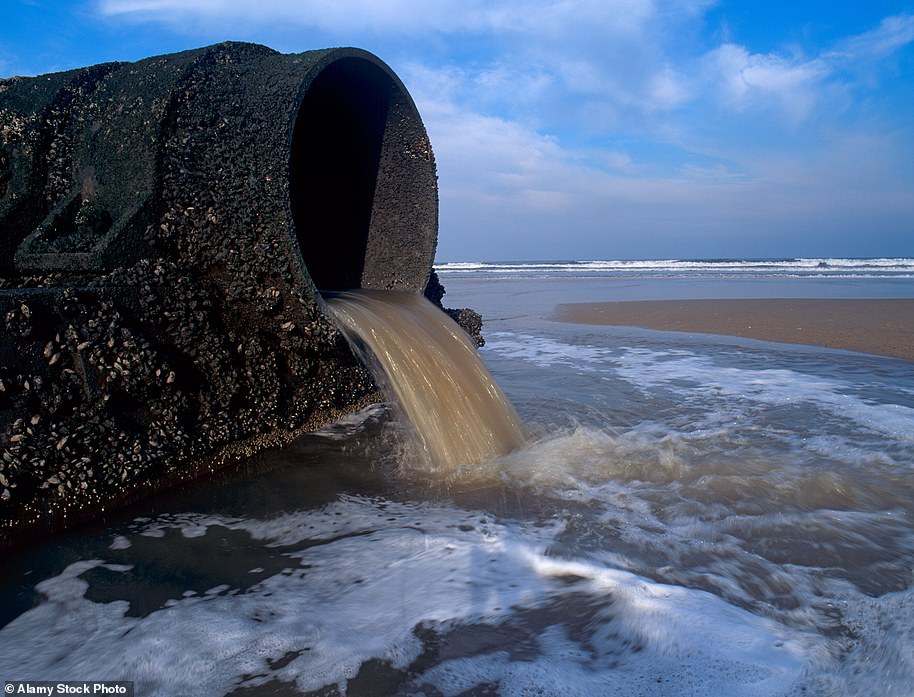 The Queen’s circle of trust: How the monarch relied on a select number of women throughout her life