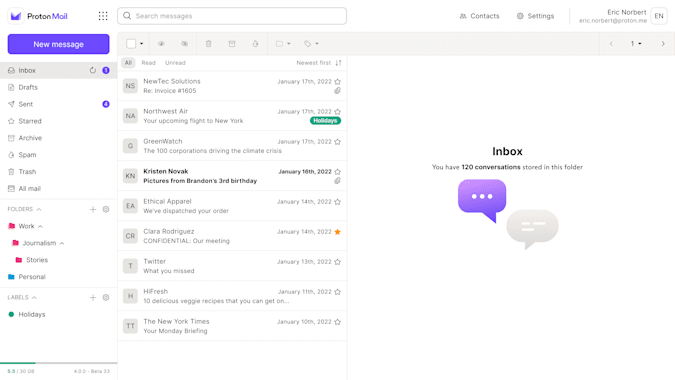 
For the privacy-minded, ProtonMail has been one of the better options for secure email — you can get an (admittedly basic) account for free and enjoy end-to-end encryption for your communications when you’re messaging other ProtonMail users. But the company’s plans have gotten a little out of date. Free accounts only come with 500MB of storage, while the €4 / month plan bumps you to a modest 4GB of storage with some other limitations like a daily 1000-message sent cap.

Starting today, though, the company is making it easier to go all-in on ProtonMail and the other services it offers, including a VPN, cloud storage and an encrypted calendar. Going forward, ProtonMail is rebranding itself simply as Proton, pushing its whole suite of privacy-focused services and updating all of its plans. The company has a new website (proton.me), and both new and existing users can use the @proton.me address rather than the old @protonmail.com option if they’re so inclined.

Going forward, Proton will offer three plans: Free, Mail Plus and Unlimited. The new free tier expands storage to 1GB and remains fairly constrained — you can only send 150 messages per day and have three labels and folders, for example. You can also access the basic Proton VPN tool and user Proton Calendar, though you’re limited to only one calendar on this plan. Proton has long said that since it doesn’t serve ads, it relies on subscriptions for revenue, so it’s not too surprising the free plan is restricted.

The Mail Plus plan will cost €5 / month, though you can get it for less if you sign up for a year or two years all in one shot. It’s a big upgrade over the old plan, though. Users now get 15GB of storage shared between their email and Proton Drive cloud storage account. There’s no restrictions on how many messages you can send or how many labels and folders you can create, and it also supports IMAP email clients via the Proton Bridge tool. There are also additional features like a new “short domain” email alias (@pm.me) that you can use to send and receive messages as well as 20 calendars that you can share with other users.

Finally, the Unlimited plan costs €12 / month; the company is positioning it as a way to get the top tier of all its services at once. That means 500GB of total storage, making Proton Drive a lot more viable for people to use as a backup service. You can use Proton Mail with up to three different custom domain addresses (up from one on the Mail Plus Plan) and with a total of 15 different email addresses (up from 10 on Mail Plus).

But the big difference is that you get the full-fledged Proton VPN with the Unlimited plan, rather than the more basic option that comes with the other two Proton plans. This includes up to 10 VPN connections rather than one, a total of 1,700+ servers across 63 different countries (rather than 100-ish servers in three countries) and faster speeds. For the time being Proton will continue offering its VPN as a standalone product, too — you can get the details on that as well as the breakdown between the basic free VPN and what you get with the full version here.

If you’re new to the Proton world, right now the company has iOS apps for mail and VPN services, and Android apps for mail, VPN and calendar. The Drive cloud storage option is still technically in beta, so there aren’t any mobile apps for it just yet — they’re slated for later this year.

And while Proton doesn’t have any major updates to the mail service or its other apps aside from unifying them with its new design language, the company has made a few updates in recent months. Last month, the iOS Mail app got some design updates and a dark mode, as well as a “conversation” mode to make threads of messages easier to read. Back in February, Proton turned on encrypted search in the Mail web app, and in January it added a tracking pixel blocker.