Potholes on UK roads NEED priority over new cycle lanes: ‘Danger to everyone!’ 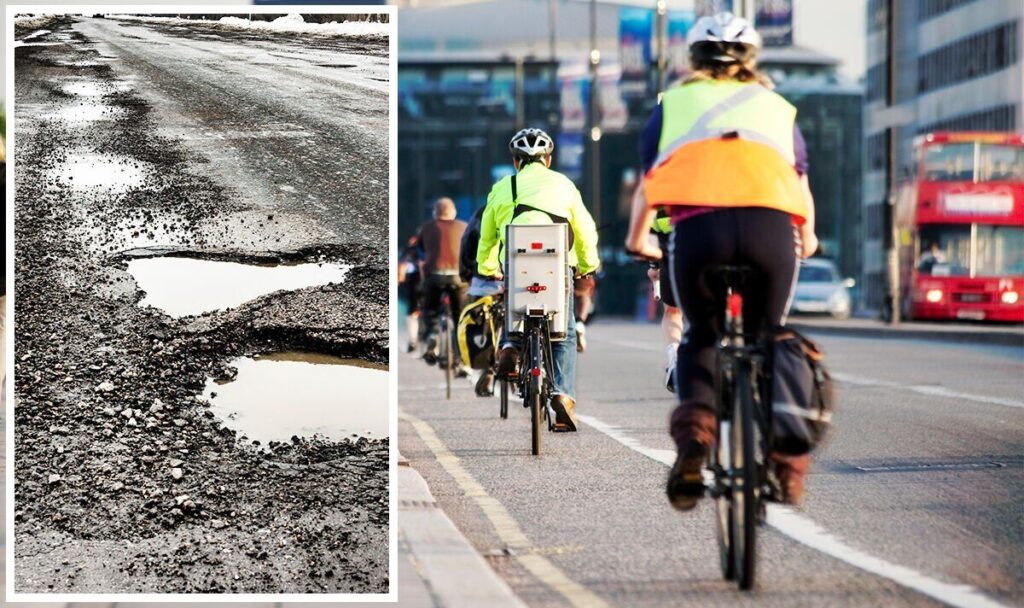 
Potholes are collapsed areas of tarmac resulting from pressure from traffic and bad weather and can be dangerous to drivers and cyclists. Almost 1.7 million potholes were filled in Britain last year – equivalent to one being repaired every 19 seconds – but thousands still remain on the road network.

In a poll that ran from 2pm on Thursday, June 16, to 10pm on Saturday, June 18, Express.co.uk asked: “Should potholes be prioritised over cycle lanes?”

Overall, 1,954 people responded with the dominant response, 97 percent (1,905 people), being “yes”, potholes should be prioritised over cycle lanes.

Dozens of readers shared their thoughts on potholes in the comments below the accompanying article.

Many readers argued that potholes affect both motorists and cyclists so should be prioritised.

One reader, username Llewydd said: “Potholes should be sorted as even cyclists are at risk.”

Username Flivoless said: “Potholes are dangerous, more so to cyclists than motorists.”

Another, username ja50 wrote: “Potholes are a danger to everyone and should be prioritised for everyone’s safety.”

And username awjfk said: “Potholes are a danger to cyclists and motorists alike.”

Express.co.uk readers are in consensus with a national survey of 2,000 drivers which revealed more than three-quarters of UK drivers want potholes fixed as opposed to new cycle lanes being built.

Of those surveyed by Opinium and insurance provider InsuretheGap, 712 were also cyclists and 71 percent of cyclists agreed that more attention was needed to fix potholes.

Ben Wooltorton of InsuretheGap.com said: “Drivers and cyclists are often seen as road rivals, but actually many drivers are also cyclists, and just want the roads to be safe for all users.

“Whilst more cycle lanes would be a dream for most cyclists, the need to improve the quality of roads is something which unites drivers and cyclists, as potholes are a serious risk for all road users.”

Some 20,000 miles of the UK’s roads were affected by roadworks last year, according to research commissioned by breakdown provider GreenFlag.

Mark Newberry, Commercial Director at Green Flag, said: “Investment in the highway network across Britain is vital for drivers so it’s good to see so much continues to be spent to maintain and improve roads.

“Road works can be a serious nuisance though, especially if they are not known about or drivers come across them during a journey and do not know an alternate route.”

However, others thought both needed investment with username EnglandAstern writing: “It’s not an either-or both need attention.”