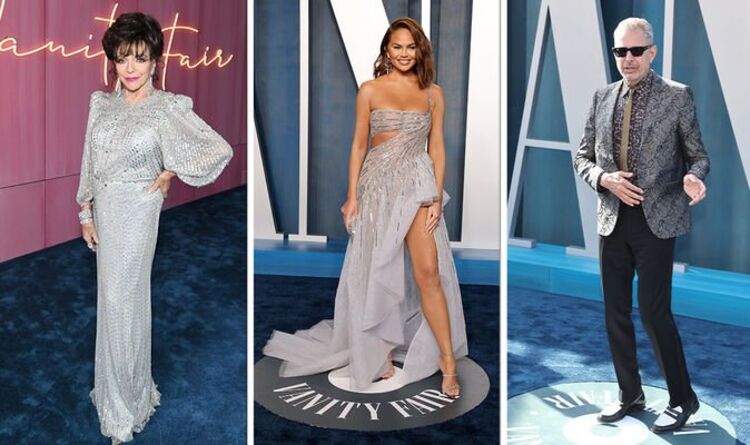 
Many stars attended the Oscars ceremony at the Dolby Theatre in Hollywood, while others preferred to view it from a distance at the Wallis Annenberg Center in Beverly Hills. The celebrities looked stylish in their best clothes. Who was there?

Each year, the Vanity Fair party is attended by some of the biggest stars in Hollywood.

This evening, among the best dressed was Jurassic Park actor Jeff Goldblum.

Jeff donned a print-clashing outfit that consisted of a leopard print shirt, a snake print jacket, and a thin brown tie.

The tie matched the brown and black printed shirt, but the actor’s jacket was a shimmering silver.

Joan Collins attended the party too and, unsurprisingly, was also clad in sequins.

Her floor-length gown had bell sleeves and a slim skirt. She completed the look with long, dangling earrings and two chunky silver bracelets.

Another look that stood out was Isla Fisher’s: the actress donned a tight, fitted white dress which was mermaid-like in its design.

Isla’s hair was even like a mermaid’s as she had tied it loosely in a long plait.

Host Radhika Jones was in red: her dress reached her feet and was pleated, with the material just underneath the dress’ waist made to look like a big rose.

She completed the look with dangling silver earrings and a silver bangle.

Jessica Alba was another celebrity who looked glamorous at the Vanity Fair viewing party.

The actress wore a navy blue tulle dress with a wide skirt, finishing off the look with long dangling silver earrings and a red lip.