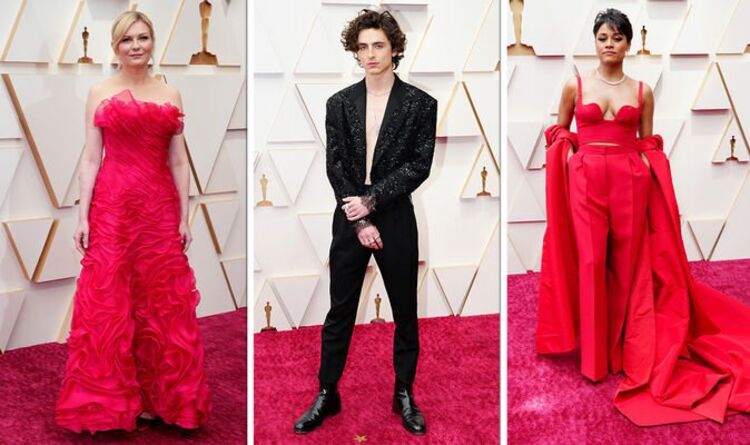 
The Oscars are back and bigger and better than ever – especially as last year’s awards had to be downsized because of the pandemic. Some of the guests have already arrived on the red carpet.

Many of the guests who have already arrived at the Oscars were clad in red outfits, smart suits, and gold dresses.

Ariana DeBose, who has been nominated for the Best Actress in a Supporting Role category for West Side Story, looked stunning in Valentino Haute Couture.

Her outfit was an all-red suit featuring a low-cut top with wide-legged trousers.

She finished the look with wing-like sleeves, which dropped by her sides from her elbows.

Another best dressed celebrity was Zoe Kravitz, who played the role of Catwoman in Matt Reeves’ The Batman.

Zoe looked ravishing in a pale pink gown with a strapless neckline which featured a small bow.

Her silver jewels, slicked back hair, and wet-look fringe completed the look – the fringe drawing comparisons to Audrey Hepburn.

The actor turned heads in a black blazer covered in sequins and a pair of plain black trousers.

He chose not to wear a shirt, causing fans to go wild on social media.

Other celebrities to wow the public were Venus and Serena Williams, who attended the Academy Awards to support King Richard – a film about their father.

Both women wore low-cut gowns, Venus donning a white number with silver finishes and Serena in a pink pleated dress with a high slit, showing off her toned leg.

Other guests in attendance included Amy Schumer, in a navy blue Oscar de la Renta dress, which featured a plunging neckline and a huge sparkling bow.

Nicole Kidman was in a silver gown with a peplum-like bodice and a subtle train.

She completed the look with matching heels and a diamond necklace.